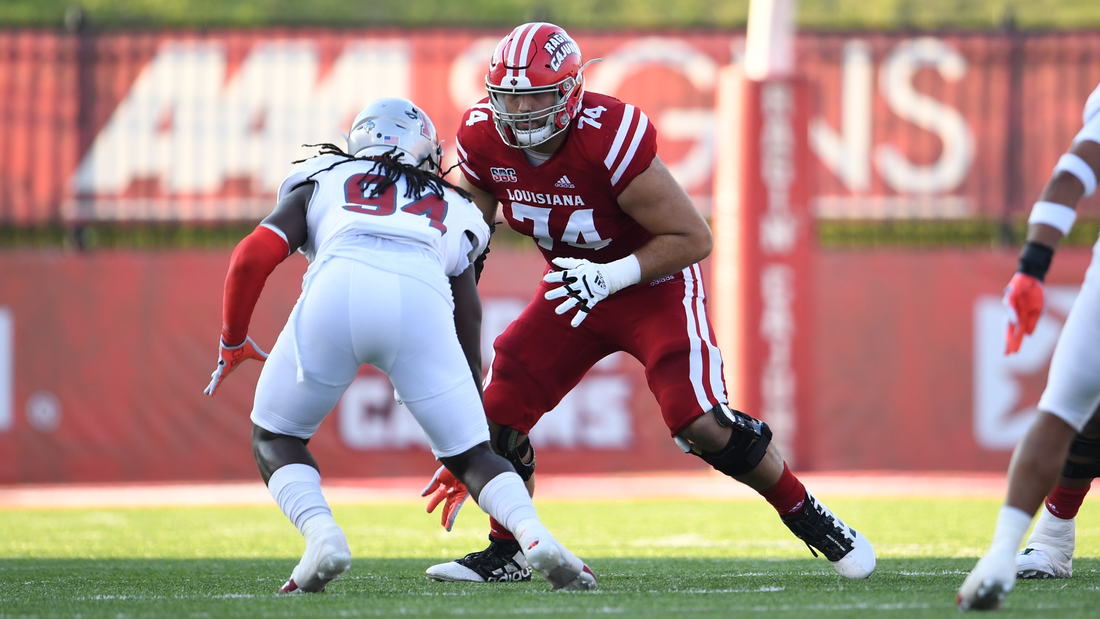 Photo by Ragin Cajun's athletics
If Max Mitchell played the way he did at a Powerhouse college football program like an Ohio State or Alabama he'd be a top offensive line prospect in the NFL draft but because he's Louisiana-Lafayette Ragin- Cajun he's been largely looked over by NFL scouts but luckily for him PFF watched games and he was the highest graded offensive lineman in the country according to them and should find himself celebrating on draft day. At 6'6" and 310, Mitchell brings exceptional technique, great length, and intangibles. When the kick slides out of his stance he plays with good explosiveness and pad level to ensure that he's not upended. He has good quickness for his size and is very patient coming out of his stance so that doesn't overextend his position. Mirrors speed rushers off the edge very well and does a great job keeping his inside gap closed off so they don't double-back and dash through it. He's very good at mirroring speed rushers when they try to outrun or bend the edge on him and can often force out of the pocket with ease. He is very quick and doesn't seem to have many false steps and it shows his attention to detail as a technician. His punch has good pop to it and his accuracy and precision when initiating which allows him to keep defenders from overwhelming him and allow him to take control of his man in pass protection. He has a strong grip once he gets into his opponents and he can certainly put the clamps on edge rushers once he finds their chest pads. As a run blocker he plays with very good pad level out of his stance and rarely finds himself losing the leverage battle. He's very good at establishing effective blocking angles on defenders and knows how to knock defenders off balance just by attacking them at weaker leverage points. When he gets into the second level he plays with good anticipation and football IQ as he knows which linebackers and safeties to block that gives his back a better chance to find daylight and he's very good making blocks against quicker and shiftier players. He can be a pancake machine when he times up his engagement right and the Ragin Cajun's always seemed like running through his gap due to his consistency at opening lanes for his running back. He's a great leader as reported by his team and his 40 starts for Louisiana-Lafayette proves his reliability. Although he doesn't play Power 5 competition often in his two games against such teams, Texas and Iowa State, he showed that he can step up to his competition and handle his own against top opponents. He was a leader on his football team with his work ethic and attention to detail in his technique and teams always love players that look to fix the little things in their game to make the biggest difference overall.

The Ragin Cajun's rarely play top level competition and it should be noted that his only real competition in his career came against Texas where his team gave up 4 sacks and the competition in the NFL could be overwhelming for him. Needs more power in his frame overall as he had trouble setting and maintaining his anchor against bullrushes. His average strength also doesn't in the run game when having to drive lineman or edge rushers off the ball and keeping his feet moving without getting stalled has been an issue for him. Not going to overwhelm defenders with his athletic traits as he's at best average for the position and it's no wonder why his technique is superior because his athleticism is not what has made him successful in his career. If there's one thing he can do better with his technique it's his use of his natural arm length because too often he's not extending to its full potential when making blocks.

PFF named this player the best offensive lineman in FBS football and watching his tape certainly justifies their grade of him but PFF doesn't matter in the NFL once you lock horns with professional football players that have mouths to feed. Max Mitchell is one of those players that I think has a high floor but lower ceiling in the NFL and if a team is looking for a quality backup that could come in and play either tackle position when a player goes down he certainly fits that mold.