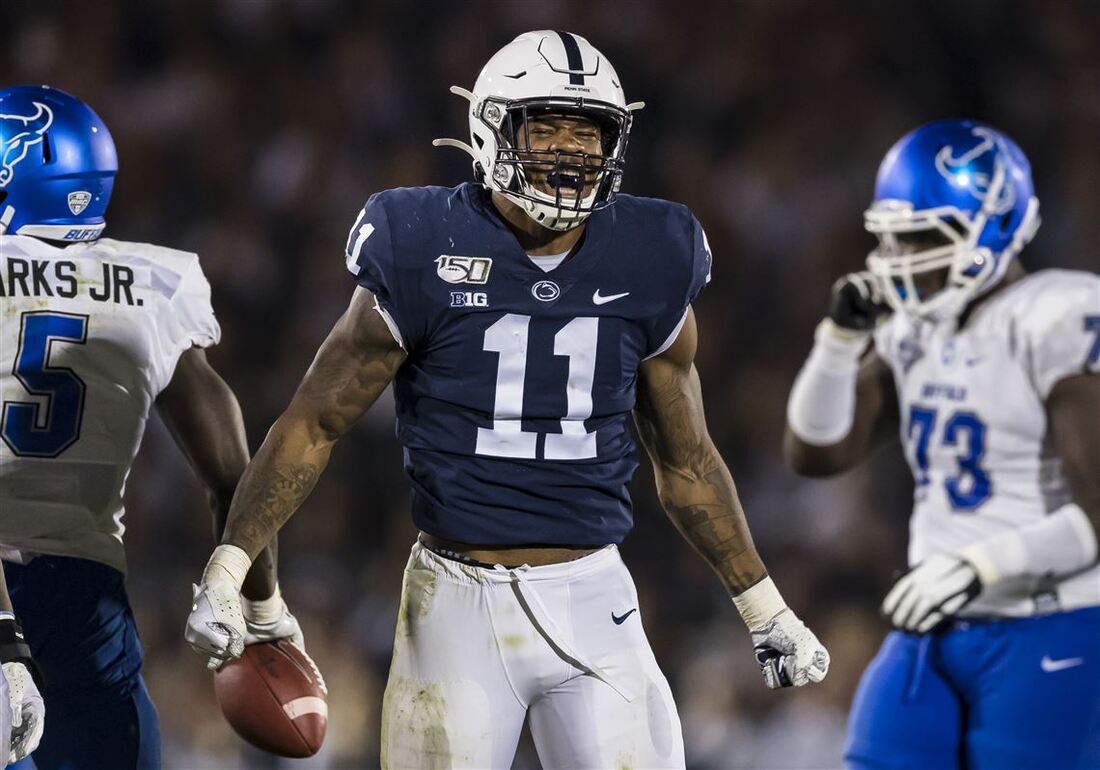 Micah Parsons is a freak of nature at the linebacker position and turned a lot of heads last year in College Football with his ruthless style of play. He's extremely aggressive in the run game and when he locks on to the football, he obliterates the ball carrier. He's very explosive out of his stance and is very quick to diagnose plays. He's built like the perfect linebacker at 6'3" and 245 lbs. with elite level length in his limbs and an unbelievably muscular build. He's an elite level athlete with freakish speed, agility, explosion, and power in his frame. He's the last guy you want to get tackled by because he puts his whole body into every hit. He's a tremendous blitzer who does a great job of letting rushing lanes open up in an offensive line and bursting through and he's very good as when blitzing up the middle when pass rushing allows his defensive lineman to eat up blocks, allowing him to explode through the trenches and get the sack. He stands up every running back he tries to tackle and you can definitely hear him make a play on TV. He's got incredibly strong hands, even for a linebacker his size, and when he latches onto a ball carrier they never seem to break out of his grip. Does a great job of evading blocks by running backs when blitzing up the middle and rarely falls for cut blocks. Not afraid to run into the teeth of an offensive line to make a play. He's a super computer with a helmet on and never seems to be out of position or away from the play. He's got tremendous instincts in run defense and is rarely ever chasing a back but rather meeting them on the line. He's such a freak athlete at the linebacker position that I think he could even be used as an outside pass rusher if a player goes, a rarity among linebackers even in the NFL. He's got incredible stamina and range to go along with his elite level athletic ability and a motor that runs nuclear hot all game. There were several games in 2019 that showed just how dominant he could be if not accounted for. He's a beast at causing fumbles either by punching them out or by ringing a ball carrier's bell and having it simply fall out. He's no stranger to make calls at the line of scrimmage for his defense and clearly shows a high level football IQ. He's a born and bred leader and has full command over the Penn State defense.

While a tremendous in-the-box linebacker, I would like to see him be more effective in pass coverage, especially with hauling in interceptions. Too often hangs around the line of scrimmage when the play starts and plays the spy position rather than venturing into coverage. Not overly comfortable with him covering tight ends or slot receivers, but then again they are usually mismatches on linebackers anyways. Didn't play in 2020 which could really hurt his draft stock considering that he's only had one year of production.

​He's probably got the highest floor of any defender in this draft and truly one of the best prospects to come out of Penn State in years, ironically at their fabled linebacker position. There are some schools that always seem to produce amazing prospects at particular positions. Stanford has their quarterbacks, USC has their, Wisconsin has their offensive lineman, Alabama has their defensive lineman, LSU has their cornerbacks, and Penn State is famous for the linebackers. I wouldn't say Micah Parsons is the best, yet, but he sure looks to be the next big thing to come out of the program. He's as clean a prospect as you'll find in any draft and will likely be a perennial pro-bowler in his career.