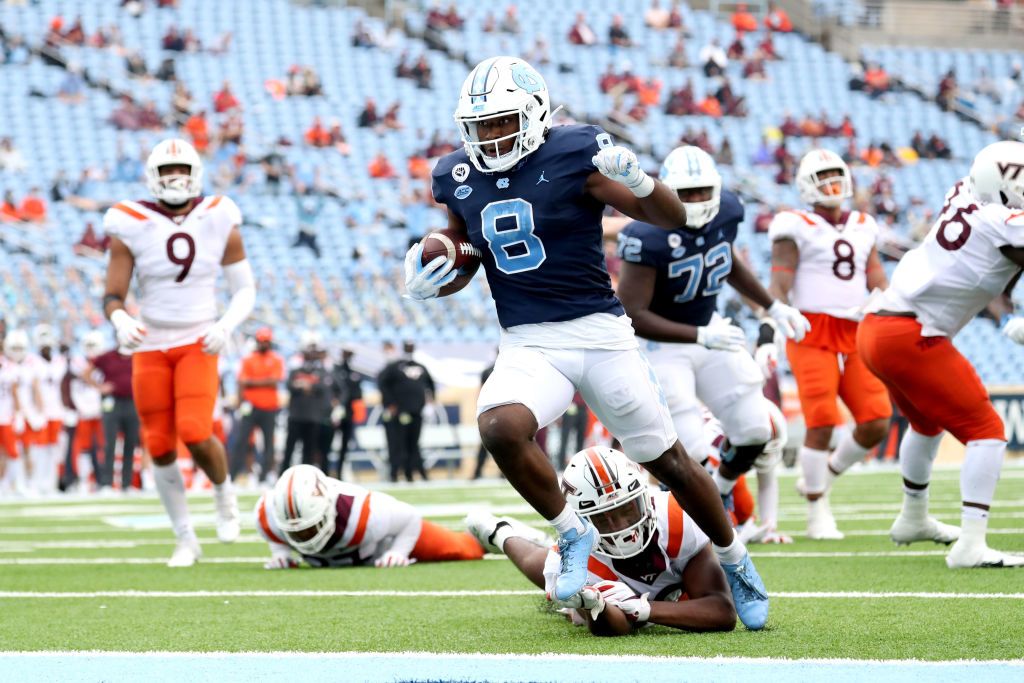 There was no running back more electrifying than in 2020 than Tar Heel running back Michael Carter and after an impressive senior bowl week that saw him show off his overall skill as a player, he has seen his draft stock rise exponentially with teams in need of running back. He's built for speed at 5'8" and 202 lbs. with exceptional burst and elusiveness. Carter was a classic home run threat for the Tar Heels, taking a slight crease or gap in a line and taking it to the house. He's got an extra gear that not many in the draft possess and he can get to top speed very quickly. He's very good at making people miss in a short area and is usually 4-5 yards down field before defenders can touch him. He's a patient runner who does a great job of picking his spots in line. He can turn the corner on a dime and does a great job of tight roping the sideline to get the most out of his runs when being pushed out of bounds. He possesses excellent balance and does a great job of absorbing contact and keeping his feet under him. He's one of the better pass catching backs in the draft with his ability run routes and catch passes. While it's not his preferred method of running, he can lower his shoulder pick up tough yards. He's very good at slipping arm tackles down low and possesses a very good stiff arm that he uses to swipe away tacklers. He possesses excellent ball carrier vision and does an excellent job of taking the path least resistance. He holds onto the football very well and doesn't get careless when weaving the through traffic. He's deadly when in the open field and break ankles at will when one-on-one with defenders. He has had a great many carries in his career thus far so he's still a fresh running back.

One of the big issues some teams may have with his is that he was part of a running back tandem with Javonte Williams, another top 100 back in this draft, and it's going to be hard to distinguish which back was the better player in college since they compliment each other. Played in an offense that features a lot of offensive talent along the offensive line and in the receiving corps, allowing to at times remain unchecked. His played in a zone blocking scheme that allowed him to thrive on open holes and get easy shots at the end zone. He has had a couple injuries in his college career such as a broken wrist and has had some dingers in his career. He's a willing but rather ineffective blocker due to his size.

If your a team in need of a change of pace back to compliment another running back, Michael Carter is probably high on you list. Few in this draft have his explosion and speed combined with his receiving skills and if put in the right scheme, he could be an excellent running back in the NFL.