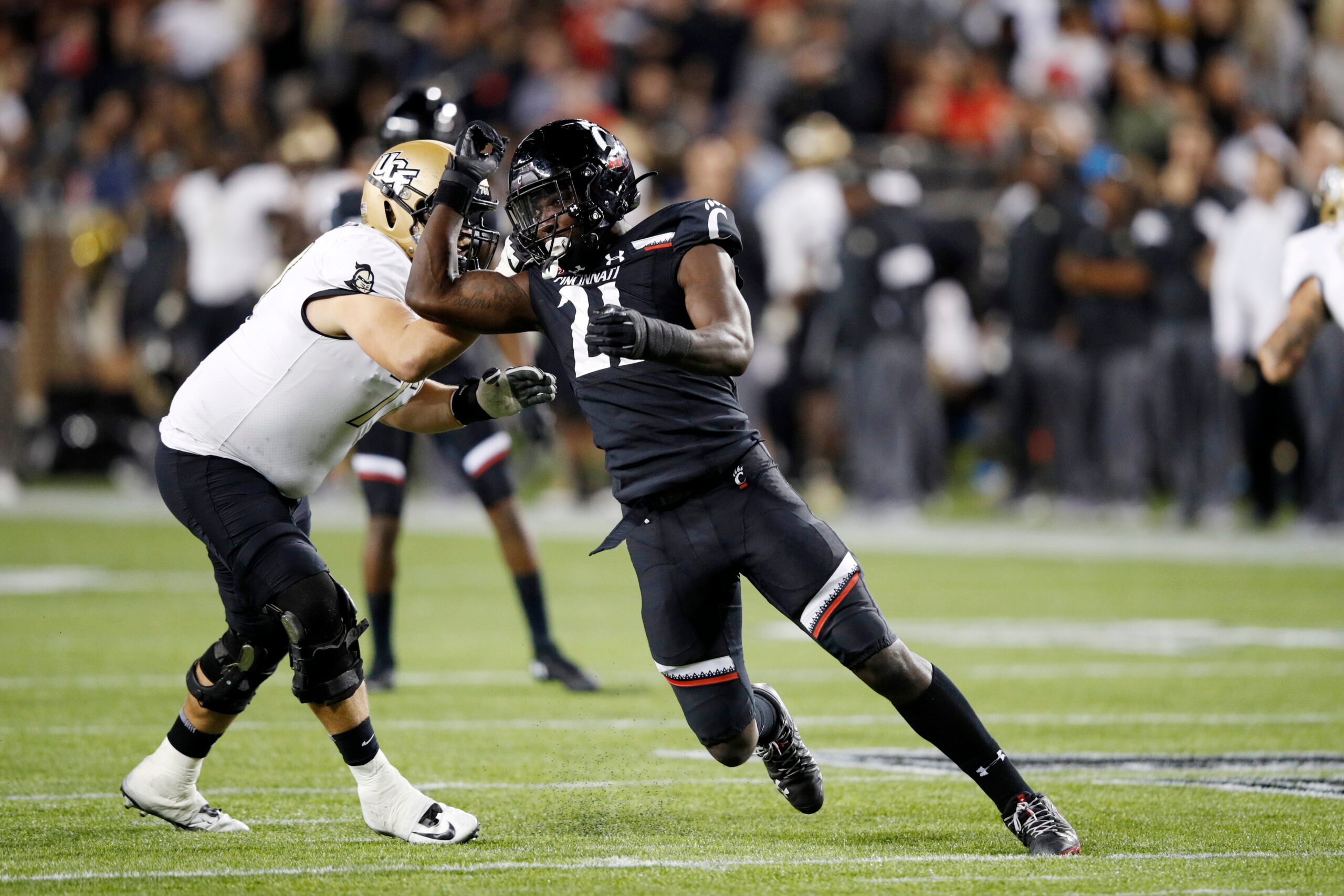 Photo by Joe Robbins-Getty Images
Myjai Sanders didn’t have one of the most productive seasons in 2021 as an edge rusher but if you look beyond his stat sheet you see the potential to be a highly disruptive defensive lineman in the NFL. He brings elite size at 6’6” and 255 lbs. with phenomenal length and athleticism. He brings ridiculous flexibility and explosiveness off the edge and his ability to bend the edge and get pressure quickly is one the best in the 2022 draft. He has an exceptional first step off the line and can turn offensive tackles into turnstiles very quickly.  He has very good power behind his hands when he makes contact with offensive tackles and has the ability to stack and shed blockers with ease if he gets his hands in a lineman's chest pads early. He has very quick and violent hands when initiating contact with offensive  tackles and does a great job of keeping his chest clean from offensive lineman. He’s a speedster off the edge and when he locks on and pursues ball carriers he can run them down with good angles. He does an impressive job of consistently using his length to get separation from offensive tackles and has enough power in his hands and arms to one-arm tackle ball carriers. He’s very twitchy and agile off the line and can make offensive tackles miss time with their punches. He has a very effective swim move off the line that can be deadly if he uses it to cut inside and collapse the pocket. He has a very good stutter and swipe move that has proven to be effective when 1-on-1 with offensive tackles as his elite speed and agility at his size makes him a very difficult player to contain. He has a nice inside swim counter rush move if he fails to establish outside leverage and can force quarterbacks to scramble outside early if a guard misses him shooting in the interior. He has a great dip and rip move off the edge that can really be effective when he gets the jump off the line. When he gets caught by offensive tackles he does a great job of getting his hands in the air to block passing lanes and his tremendous length does force quarterbacks to readjust their throws. In the run game, he shows veracity and toughness at the line to hold his ground and allow his fellow defenders to make plays. He does a nice job on stunts and twists of shooting through gaps and forcing the running back to bounce the ball outside. After his excellent 2020 season for the Bearcats, offensive coordinators have schemed plays away from him as well forcing him to fight through double teams and having running backs chip block him at the line to halt his pass rush which has opened up the rest of his defense to make plays and attack the offense. He’s a relentless pursuit player off the edge and even if the play is running away from him, he will still chase down field. He plays with a white-hot motor and is an outstanding competitor.

His lanky frame and undeveloped lower half has made him at times a liability in the run game as offensive lineman can uproot and drive him back with ease. He needs to work on his balance after contact with offensive lineman as he can lose his footing and cost him a rep. He doesn’t bull rush very much off the line as he most relies on his speed and agility to make plays. His pad level is inconsistent off the line and can find himself having to work much harder to get home on his pass rush as well as leaving his chest open to punches from lineman. Like most edge rushers with his size and length he tackles too high on ball carriers, quarterbacks and running backs alike, and needs to learn to bring his pads down and wrap at the waist. He’s not asked to play coverage at Cincinnati and I think he’s only going to be productive as a defensive end in the NFL. He doesn’t go for strip sacks very much and doesn’t attack the football when making tackles on running backs. He has trouble holding his edge in the run game with his lack of muscle in his frame and if he loses the leverage battle on run plays, he can find himself quickly getting driven out of plays. Too often can rely on his superb athleticism to make plays and can struggle against offensive lineman that can match his athleticism with their own. He can be too late to get into his stance at the line and lose reps early because of it.

Myjai Sanders had a rough year in 2021 when it came to getting sacks for the Bearcats but he still affected offenses in a major with his relentless attack in the pass rush which forced coordinators to make sure that he’s not blocked alone at the line. His team has certainly benefited a great deal from his offensive attention and his fellow teammates on the line have been able to wreak havoc in his place. His unyielding play and superb athletic ability makes him a very intriguing prospect in the 2022 NFL draft and if he can polish his game and bulk up some muscle in his lengthy frame, a team could have a quality three-down defensive starter and potential pro bowl player in the NFL.