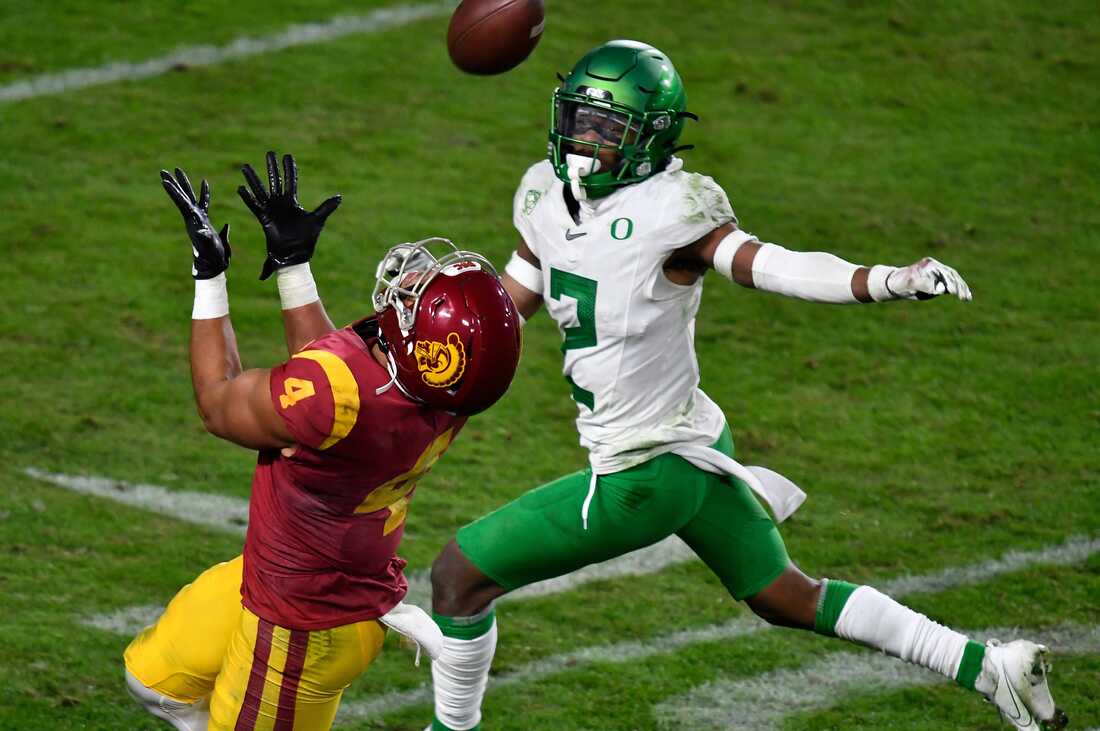 Photo by Robert Hanashiro-USA Today Sports
Oregon tends to produce some of the toughest players in the PAC-12 and Mykael Wright is exhibit A for this reputation. At 5'11" and 180 lbs. Wright brings excellent athleticism and toughness to the position. He's electric on the field in terms of his speed, explosiveness, and agility and has shown that he can hang with the most athletic receivers in college football. In man coverage, he displays incredible agility and footwork out of his stance. He keeps his frame low to the ground and tight to the ground which helps make change direction as well as accelerate quicker. He’s aggressive at the line of scrimmage and does a nice job of forcing receivers to fight through him to get on their route. He has good length for his size and does a nice job of getting the most out of it when attempting to bat away passes. He has a fluid back pedal and does a great job of keeping his focus on the receiver without biting on routes and giving up big plays. He has more than enough speed to turn and run with receivers downfield as well as contest catches down field. He has shown to have a happy medium in coverage with his ability to stick his receiver in coverage without getting to grabby down the field. In zone coverage, he possesses great range to cover ground quickly on passes as well as diagnosing routes and covering accordingly. He has good vertical explosiveness and combined with his length it makes him challenging to throw over occasionally. He’s patient in the zone and doesn’t get over reactive to pump fakes and look off’s. He has spent time at various positions in Oregon's secondary such as slot corner and occasionally can drop back to safety which shows his high football IQ. He’s a phenomenal corner in run defense with his excellent tackling skills and toughness. He does a nice job of getting low and hitting ball carrier heads up, ensuring they go down quickly. He doesn’t get scared easily when making tackles on bigger players. He plays with great competitive fire and is a high effort player on the field.

His size will be his biggest detriment heading into the NFL draft because he is both shorter and lighter than most NFL teams desire in a cornerback. He has issues in press coverage, especially against bigger receivers, when it comes to forcing receivers to fight through him on their routes to make plays. He doesn’t possess the strength to consistently jam receivers at the line of scrimmage and knock them off their route early. Bigger and more athletic receivers have had success against him when they can simply just use their natural gifts to make plays and his likelihood of succeeding on the outside in the pros against NFL receivers is very low. His ball skills need work as he can miss time his jump on the ball to make plays and his hands also need work as well. He has benefitted from playing on a great 2021 Oregon Duck defense with a potential #1 overall in Kayvon Thibodeaux as well as an excellent recruiting class with plenty of freshmen balling out.

Mykael Wright is a great athlete and technician but his size limitations likely force him into the slot corner role in the NFL and could cause him to fall a bit. He’s a talented and smart defensive back prospect that can line up anywhere a defensive coordinator wants him which can be invaluable to a team when it comes to depth. If Mykael Wright can show throughout the draft process that his athleticism and technique can translate onto an NFL field, he could be a sneaky good pick in the draft.