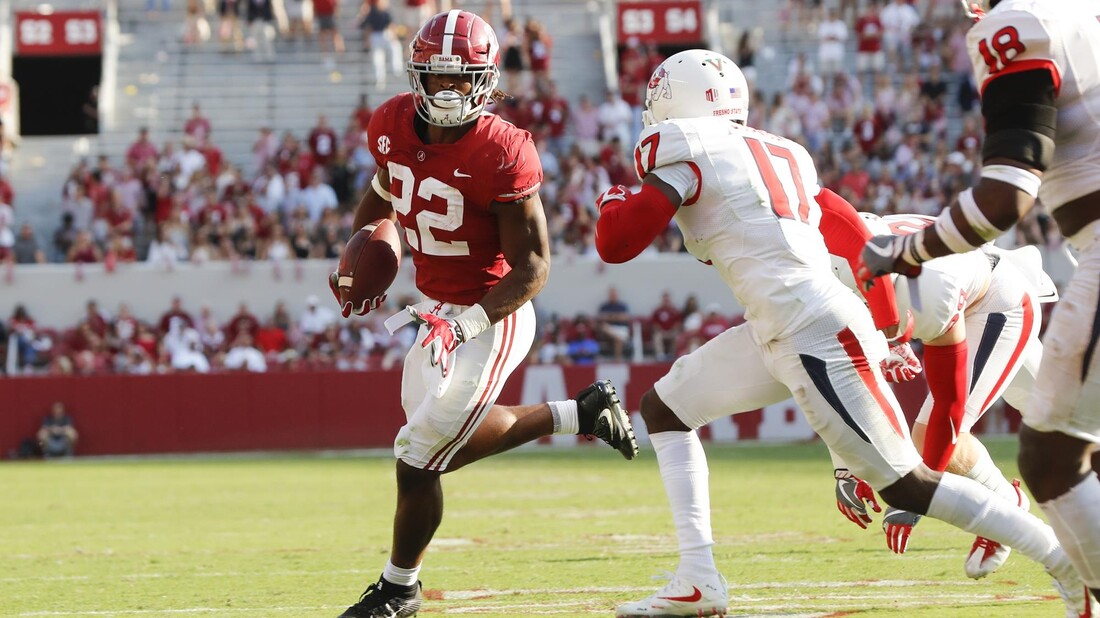 Najee Harris is probably going to find himself much higher on this list after next season as he now will become the featured back in the legendary Alabama running back field. Najee Harris looks like he was built in a lab and designed to run and catch the football which is exactly what he does.  He's a 6'2" and 230 lbs. powerback with electric speed and agility and more than enough size and power to pick up the short yardage in a goal line situation. Exceptional burst once he has the ball in his hands and is a dangerous running back when he has a clean hole to run through. He's got the ability to run routes from the slot which is unbelievable for a guy his size. He has very good hands which makes him a very reliable safety valve running back and an excellent receiver on a screen pass. He's got electric elusiveness and is quick to break ankles in the open field when he has room to run. Didn't see a lot of him blocking at Alabama but given his size and athleticism he should be very capable of protecting the quarterback. He's an unbelievable hurdler when he locks onto a tackler and can leap over defenders extremely quickly. His stiff arm is strong, fast, and explosive and will toss defenders off of them. Might be the most balanced powerback I have ever seen in college football with his ability to take multiple shots, hurdle defenders, spin-out of tackles and juke defenders all in the same play and still maintain his feet for more yardage. He's a very patient runner when his holes close up initially and will work through the line of scrimmage to find one. It takes at least two players to bring him down usually, especially in the open field. Dangerous player to tackle head because he will drop his pads and run defenders over. He can be a one-cut nightmare for defenders in the open field. He's exceptionally quick and shifty for powerback in the phone booth and will be an absolute nightmare for defenses if he plays in a zone read running style.

Over the last couple season's Alabama turned into one of the most electrifying passing offenses in college football with wide receivers Jerry Jeudy, Henry Ruggs III, Jaylen Waddle, Devonta Smith destroying secondary's, allowing them to take advantage of undermanned front 7's. He's got great speed for his size but he needs a runway to hit top gear and has been caught from behind on more than a few occasions. He has an upright running style that can make him more susceptible to getting tackles by linebackers and given his above average height for the position it also doesn't help him avoid tacklers by hiding behind his lineman either. He ran behind one of the best offensive lines in college football and played for a school that has featured top level offensive lineman every year for as long as I could remember.

Najee Harris showed in 2020 that he can be a bell cow back for an NFL team and is more than capable of playing all 3 downs. His size, speed, and balanced running style not only project him as a consistent player on the field but also shows that he could have a very long shelf life for a running back, a rarity in today's NFL. He'd be a total steal late in Day 1 of the draft and will be a highlight reel the moment he takes the field.