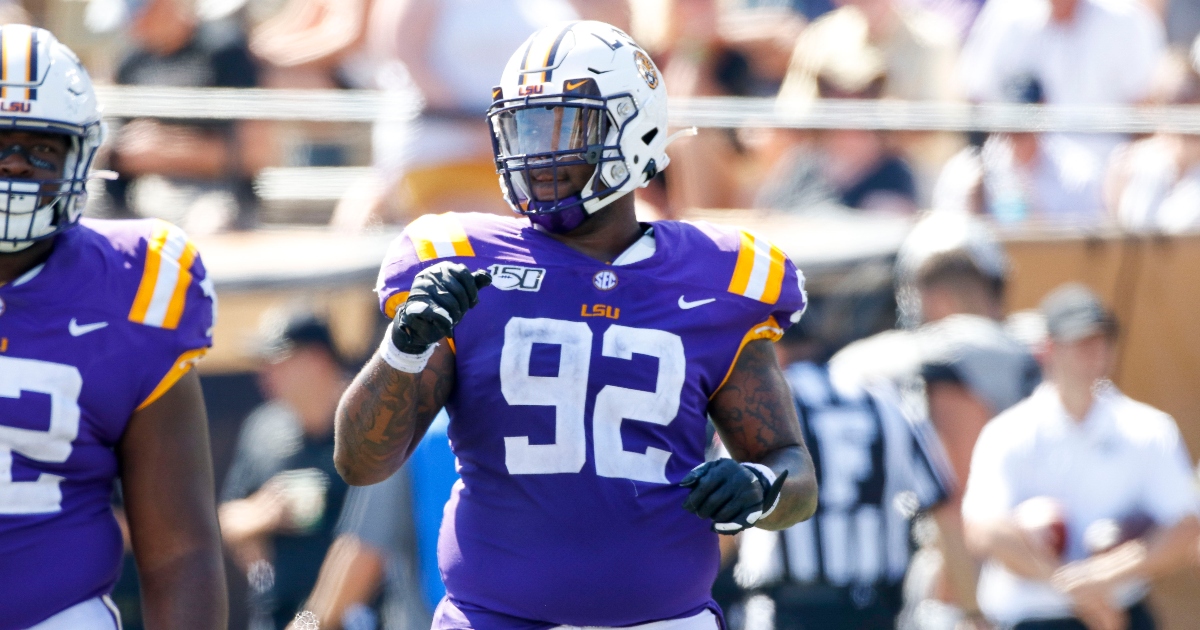 Photo by Andy Altenburger-Icon Sportswire via getty images
Neil Farrell Jr. was one of standouts in the 2021 season on the LSU defensive line that saw plenty of turmoil this past season and after a standout performance at the Senior Bowl both in practice and during the game Neil Farrell Jr. certainly earned himself some looks from NFL teams looking to bolster their defensive line. At 6'4" and 330 lbs., Farrell Jr. brings exceptional power, nastiness, and technique to the position. As a pass rusher, he's made his living in the middle of the defensive line collapsing the pocket from the inside and relentlessly trying to get free to cause more pressure. He comes off the line with good pad level for his size and if he establishes great leverage off the snap his opponent is going for a ride. He's a violent and nasty hand fighter in the middle of the defensive line and he's proven himself to be a difficult man to pin down and get a good grip on. He possesses a swift and powerful swim move that can knock defenders sideways if he times it well. His powerful grip and upper body strength give him a great push pull move that allows him to quickly disengage from opposing offensive lineman and get up field and his violence when initiating this move can wear down offensive lineman towards the end of a game. He was very good at breaking away from interior lineman when he had a chance to make a play and can give chase for a short while if the quarterback is within his range. As a run defender, he's quick to plant his feet in the ground and stall run plays as well as clog up run lanes that often force running backs to bail on plays earlier. He consistently demands double and triple teams which allowed his fellow defenders to attack the line of scrimmage often unimpeded. He's a very good tackler and doesn't often find his grip on ball carriers getting broken. He is a nasty lineman in the trenches whose impact in run defense is felt in run defense and NFL teams in need of an attitude adjustment in the middle of their line should have him on their board. He's a relentless worker on and off the field and certainly shows a great motor on tape with his willingness to run after plays despite being outreach. He's been a leader in the LSU locker room and will have a positive effect in the culture of an organization.

Not a defensive lineman that is going to blow anyone away with his speed or agility and at the combine he showed NFL teams that he's not much of a threat when it comes to chasing players. He's not a versatile defensive lineman with his only real use being a nose guard or a 1-tech defensive tackle. He lacks desired arm length for a defensive lineman and his ability to get hands into his opponents chest is questionable at best when projecting his effectiveness in the NFL. He's not going to be a consistent presence in the passing game outside of being a space eater and teams should look at him as more of a run stuffer for them to get the most success out of him. He's not agile or quick enough to effectively use finesse moves like spins or stutter-steps and if he can't overpower his opponent he won't be effective in the passing game.

He's a one dimensional player that has potential to anchor a defensive line because while the position of nose guard certainly isn't given the value it used to be, they certainly have a role in the NFL when it comes to being the foundational piece. Neil Farrell Jr. allowed his fellow defenders to make plays with his tenacity and power and while LSU wasn't a great program in 2021, you can't blame them for their shortcomings . He's a starting caliber defensive tackle in my opinion with his ability to make sneaky good plays and NFL teams that need size in the middle should give him a call on draft day.