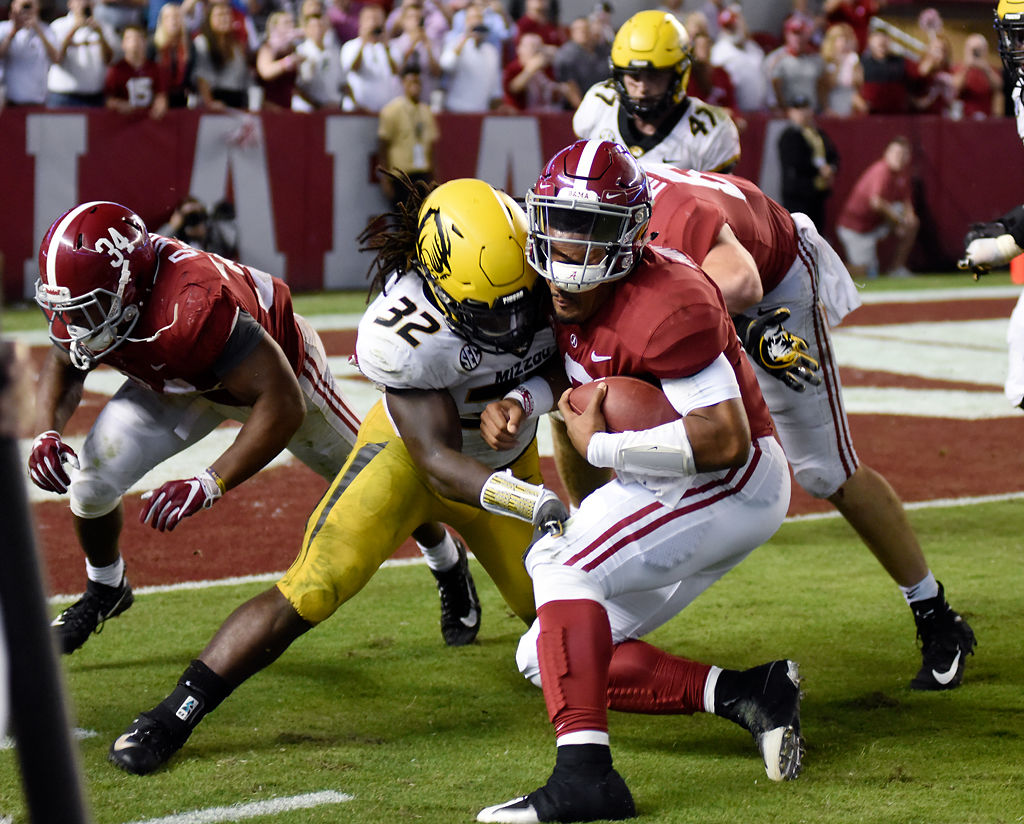 Mizzou Tigers haven't had great defensive prospects come out of that program in quite awhile but Nick Bolton could be the guy to change that after his stellar season last year. He's built like a prototypical linebacker at 5'11" and 237 lbs. with exceptional explosion and speed. He's probably the biggest hitter among linebackers and is the last guy a ball carrier wants to get tackled by in the SEC. He's extremely explosive once he locks on to a ball carrier and comes in like a missile to make the play. Excellent instincts against the run and does a great job bursting through openings in an offensive line to make a play in the backfield. Plays like he's on fire and it's a contagious energy that spreads to his teammates. He's got good instincts in coverage and never seems to be out of position. He has elite level agility and speed and can change direction on a dime to chase a running back like a cheetah chases a gazelle. He possesses a non-stop motor that is running hot all game and doesn't quit until after the whistle. Does a good job, even for linebacker, of covering running backs on screen passes and short crossing routes and will make an effort to deflect a football. He's got very strong hands that can bring down a ball carrier quickly. He's adept in both zone and man coverage and has surprisingly good hands for a linebacker. He's a great blitzer and does a nice job of weaving through traffic to make a play in the backfield. He thrives in short yardage scenarios where his instincts and physicality make him a menacing player. He's clearly the leader of the Mizzou Tigers defense and his leadership skills will earn him some points among defensive coordinators.

Doesn't attack the football enough when making a play and could practice stripping the football more to create turnovers. Not effective enough as a pass rusher when blitzing up as his lack of length and size makes it very difficult for him to disengage and shed blocks. He has shown to be less effective if his defensive line in front of him doesn't open up holes in the offensive line and will need to land on a defense in the NFL that can create problems in the interior of an offensive. His short arms have proven to be his downfall if he gets stiff arms and will need to learn to attack the waist of bigger ball carriers in the NFL. His size limits his ability to only a 4-3 scheme as he lacks the length to attack the line without lineman in front clearing the way.

He reminds me of Devin Bush coming out of Michigan a couple years ago not just because of the dreadlocks but because their styles of play are eerily similar. Both possess exceptional explosion and speed and both a hammer when they make tackles and while Bush is a far more effective blitzer coming out of college, Bolton showed much improvement as a blitzer in 2020. He has the potential to make an early impression in a 4-3 defense that has a productive defensive line in front of him and should develop into a quality linebacker within his rookie contract.