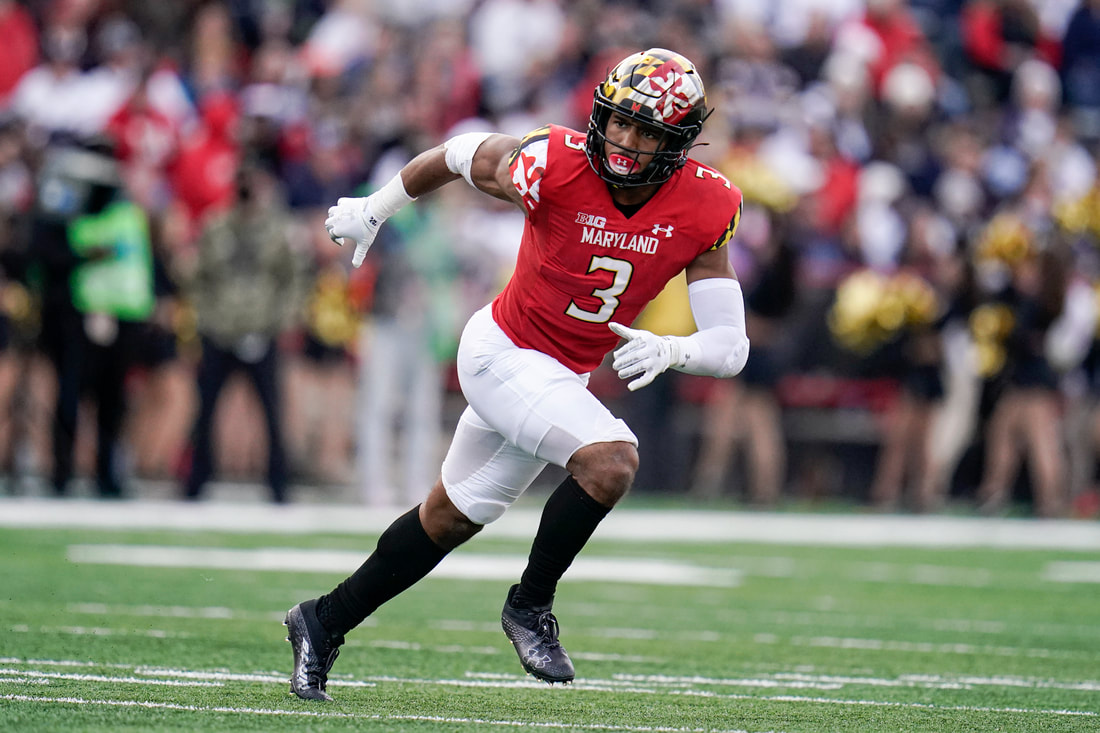 Photo by Julio Cortez-Associated Press
One of the big winners from the NFL Combine was Maryland Terrapin safety Nick Cross whose times and measurements at the NFL combine reveal a player that has a potential sky high ceiling at the position and if you watched any Maryland tape in 2021 it's hard not to notice the impact he had on the field. At a muscular 6' and 215 lbs., Cross brings elite athleticism, versatility, and menacing style of play. In zone coverage, you can clearly see a play that flashes limitless range and explosiveness when asked to play zone and his 40 yard dash time certainly gives credence to his potential. When he locks onto a pass, he explodes out of his stance to make a play and on more than one occasion comes from single high all the way to the sideline to break up throws. He's usually too quick to run away from in zone when the pass is thrown and when gets to his target if it's a broken pass, it's a quick and easy tackle. He has the athletic ability and fluidity to cover receivers in the slot as well as the size and explosiveness to give tight ends trouble all over the field. Not easily bullied by tight ends in coverage trying to get some separation from him and showed a feistiness to make any task for bigger receivers at least cumbersome. In run defense, he comes downhill with a vengeance and has obliterated many receivers and running backs unfortunate enough to find him in front of them. He's a powerful safety that has plenty of muscle in his frame to square up, upend, and takedown bigger ball carriers with ease. He flows with the trenches very well when asked to play in the box for his defense and is fearless when attacking the trenches in run defense. He excels at getting low when hitting ball carriers in the trenches and has popped the football out three times in his relatively short career. His ball skills are excellent at the safety position with 5 interceptions in his short career and it shows that when he does everything right on a particular coverage assignment, he can reap the rewards. He's a player that has been used more like a gadget defender at Maryland rather than been given one particular position to study and polish up because he's taken ample snaps at linebacker, both safety positions, and slot cornerback and teams looking for a defender that can wear multiple hats for their team should have this guy higher on their board than most. Nick Cross is a menacing football player that has a do-or-die trying style of play when it comes to helping his team and you can bet that any role his coach gives him he'll do his best to play to his full potential.

He's raw from a coverage standpoint at this point in his career and will likely need good and heavy coaching early on in his development to realize his potential in coverage. His instincts in coverage are a work in progress and while he certainly has flashed great range in the secondary, his distrust with his eyes on routes and offensive passing patterns often leaves him guessing rather than deciding which makes him late on throws as well as tackles. His indecisiveness in coverage and fear of making mistakes got him benched in a short 2020 season and learning how to process what he's seeing is crucial to his success in the pros. I didn't see him come down and play a great deal of slot coverage in either man or zone and will likely need to learn quite a bit in practice if teams want him to come down and cover efficiently. He can sometimes go for the wrecking ball hit in run defense over wrapping up and tackling and when this doesn't bring his target down, it has ended badly for his team. His pursuit angles need considerable work when giving chase as he can overrun his target allowing them to simply cut behind him up field. I wish he was used more as a blitzer in his college career because he has all the tools and traits to live in his opponents backfield.

I know it's not a great idea to blame coaching staff or a season for a player's shortcomings but clearly there was a disconnect with him and coaches when it came to his development. I would categorize him as a bit of a project for the position given his lack of development as a safety but if a team has a coach that knows how to communicate with him, he could be a quality NFL defender. If he doesn't pan out on defense, your team could at the very least have a good special teams player but that's clearly not the goal for him or his coaching staff.