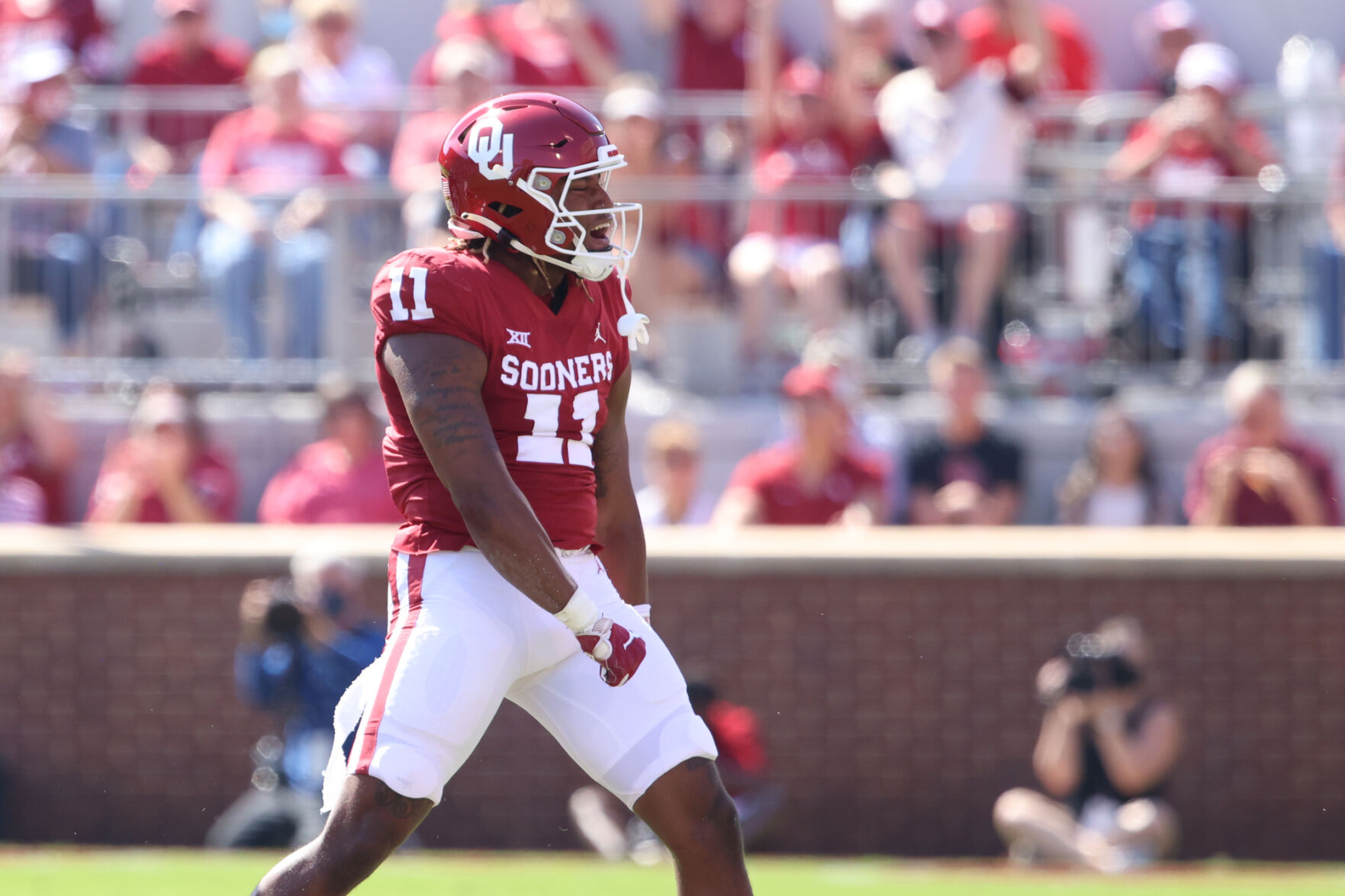 Photo by Edward Reali-The Daily
Although the Oklahoma Sooners haven't produced many quality defensive draft prospects in recent years, Nik Bonitto is about to change the narrative for Sooner defenders. At 6'3" and 245 lbs., Nik Bonitto brings electrifying athleticism and excellent technique. He's one of the most dangerous pass rushers in the SEC with his freakish explosiveness, speed, and agility at his size not to mention his versatility to line up everywhere for the Sooners defense. His first step off the line at the snap is incredibly explosive and it is rare to see an offensive lineman be able to mirror him. He has tremendous flexibility in his frame and has shown little to no issues bending the edge and getting to the quarterback on both sides of the ball. He has electric speed off the edge and is a phenomenal pursuit player when chasing down ball carriers. He plays with phenomenal pad level when he comes off the edge and his ability to dip his shoulder and slip under the arms of the tackle is terrifying for offensive tackles to deal with. He has very fast and aggressive hands at the line and does a great job of keeping his chest pads clean from offensive lineman. He has good length and impressive power in his frame and can bull rush offensive lineman if he gets into their chest pads early. He has a very good stutter and swipe move off the line that, combined with his natural agility and speed, make this move of his difficult for offensive lineman to block. He has a good swim move that can be effective both inside the line and outside the offensive tackle as well as an effective push pull move when he tries attacking the outside shoulder of the offensive tackle. He has an impressive spin move that he uses as both an initial pass rush move and a counter rush move when the ball carrier cuts inside on him. He's really good at stunting and shooting inside gaps as he does a nice job of keeping his pad level low when weaving through the trenches and does a nice job of rocketing up field when he locks onto quarterbacks in the pocket. He does a phenomenal job when asked to play spy role deep coverage plays and quarterbacks that try and test him usually don’t get very far. In run defense, he does a great job of digging his heels in the ground and holding his end of the line. He does a great job of using his length and power to stack offensive lineman and force ball carriers to run outside and give himself a chance to chase down and tackle. He has phenomenal change of direction for an edge defender and if he redirects and gives chase to ball carriers he has the necessary athleticism to do so and tackle ball carriers. He doesn't bite on read-option plays and does a great job following the play when chasing down the line and is great at shooting gaps in the rush lane tackling the ball carrier in the hole. He's a very good tackler with great grip strength and power in his frame and isn't afraid to head-on tackle power backs. He can bring the pain when he has a clean shot on ball carriers and will upend ball carriers that test him head on. His coverage skills are the best in the draft among edge rushers and can be trusted to play both man and zone. He does a nice job of recognizing wheel routes and has more than enough athleticism to stick to running backs down the seam. He has great range and enough twitchiness in his lower half to make some plays in zone and does a nice job of reading the passing patterns as they develop while keeping his eyes on the quarterback. He has some scheme versatility with the ability to play 3-4 edge rusher and Will linebacker in a 4-3. He does a nice job of reading the offense and timing his jump on the play which is a testament to his football. He’s a high motor player and a relentless competitor who will give 110% effort for his team.

He noticeably struggles with power on the field when in both his pass rush and run defense due to his size and he will need to bulk his frame and work on his ability to counter powerful offensive lineman. He can lose his balance when offensive lineman can accurately punch him when he bends the edge and his pass rush can completely collapse on the play. His lack of size can be an issue if offensive lineman that utilize more power in their game can engage with him and overwhelm him. He can be driven out of the pocket by offensive lineman if they get him head on and have momentum behind them and it can get ugly for him if he doesn’t get his feet set. Doesn’t play from a three-point stance for Oklahoma on the edge which kills his scheme versatility as an edge rusher. He doesn’t attempt to strip the football from ball carriers and has had opportunities to do so slip him by. When his rush attempt fails he doesn't try to get his hands up and bat down passes. He can sometimes be too patient when spying on the quarterback and make his move later than he should, often giving the quarterback more time to throw or more yards if he leaves the pocket.

He’s been Oklahoma’s most disruptive front seven player and is their best defensive player at times. He does a great job of cleaning up messes on the defense in both the pass rush and run defense and will be a fast rising prospect once the combine hits people put numbers on his athleticism. I think Oklahoma’s reputation as an offensive powerhouse in college football has done him a disservice and if he were on Alabama’s or Georgia’s defense with his level of production I think he'd be skyrocketing up NFL draft boards. He’s a phenomenal talent and could be the steal of the draft if picked by the right team.