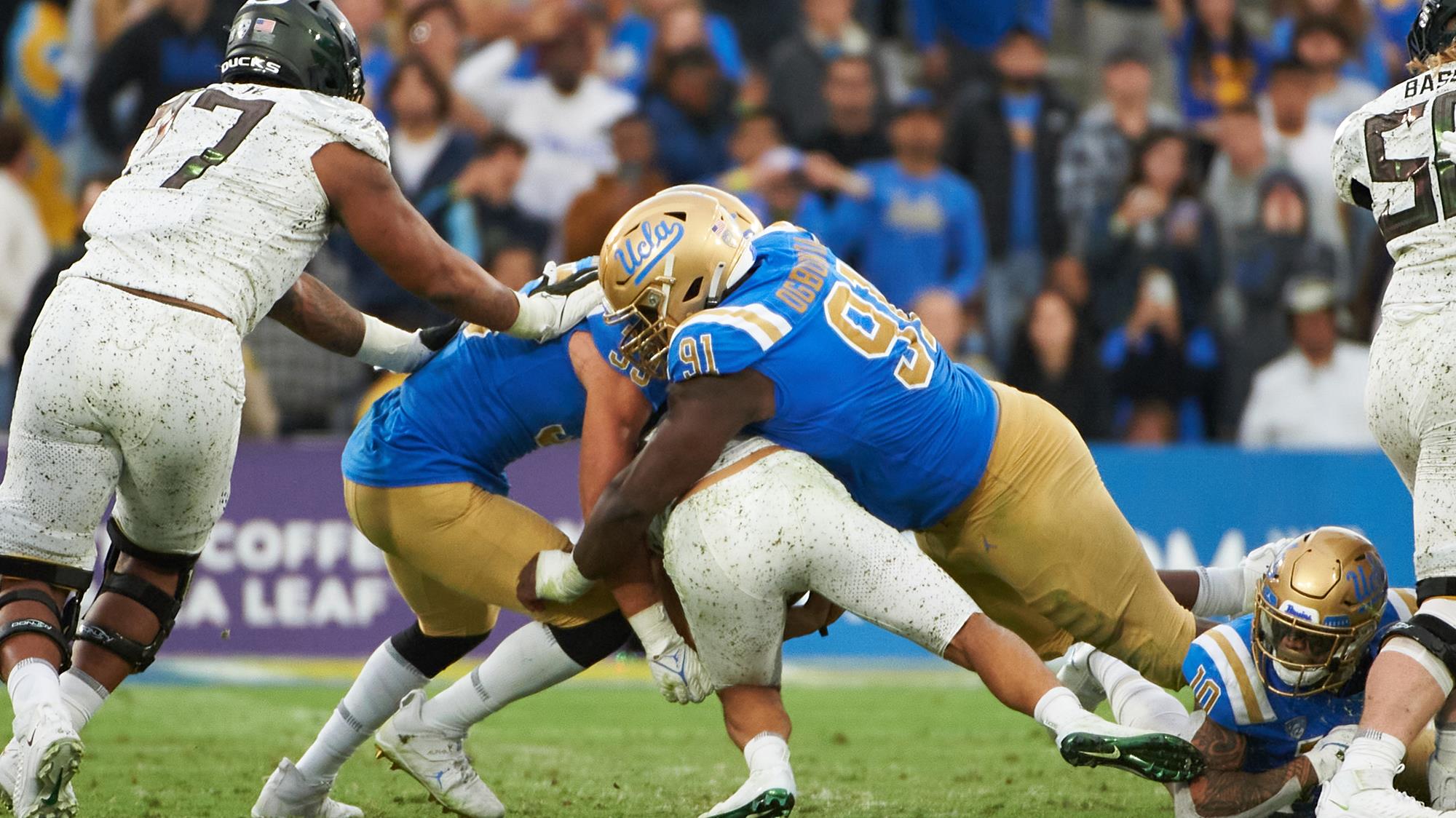 Photo by Don Liebig-UCLA Athletics
Built like a classic run stuffer in the interior of the defensive line, Otito Ogbonnia made quite an impression on NFL scouts in 2021 for his ability to clog the trenches in the PAC-12. At 6'4" and 320 lbs., Ogbonnia brings phenomenal strength, great length, and relentless work ethic. As a pass rusher, he possesses a phenomenal bull rush up the middle that can collapse the pocket effectively. He comes off the line with great explosion and pad level off the line and has shown an ability to shoot gaps if he catches his opposing lineman off guard. He has a menacing punch off  the line that is made effective by his incredible power in his upper body and exceptional arm length and he's flashed an ability to completely overwhelm offensive lineman off the snap when he combines his traits effectively. He has a very good push-pull move that helps him get a lane to rush the quarterback as well as shed blocks to collapse the pocket. He has a powerful swim move that can rock lineman sideways and it has been effective for him when he can shoot gaps and create issues in the backfield early. When his rush fails, he's good about getting his hands up in the air to bat down passes and disrupt lanes and had great success in his career of doing so for his defense. As a run defender, he's a defensive tackle that does all the dirty work for his team and this will probably be the role that he thrives in the NFL. He's great at holding his ground as he comes off the line with great pad level and he possesses tremendous power in his base. He's often forced running backs to cutback out of holes with his ability to clog lanes and force double teams in the interior and many PAC-12 running backs in 2021 had to go to plan B. He's capable of shooting gaps in the line when he can squeeze the the trenches a bit and can force running back to cut outside early. Although not often seen, he's proven to be a defensive lineman that can one-arm tackle ball carriers when he gets a grip on them. He's capable of splitting double to attack up field and rarely has found himself getting driven off the line. He's a rugged and tough interior lineman that loves to do the grunt work on defense for the betterment of the team and UCLA's defense in 2021 played very well because of his ability to anchor in the middle.

He's strictly a power based interior lineman that doesn't have much promise outside of a nose guard or 1-tech role on a defensive line. All of his success is relied upon him driving his opposing lineman back into the pocket as he lacks the lateral quickness and agility. His pad level tends to rise as his pass rush gets deep into the pocket and keeping pad level low will help him develop more consistency in his production. He can find himself getting eluded very easily by quarterbacks when he finds himself with an opportunity to get a sack and he may never develop the agility and quickness to consistently outmaneuver quarterbacks. He doesn’t possess a counter rush game at this point in his career and strictly relies upon his power and aggressiveness in the interior to get free.  He has clunky footwork and can be heavy footed in his movements in his rush and too often can get caught in the wash of the trenches in the run game. He's not much of a pass rusher at this point in his career and probably won't ever develop into one. He doesn't possess any finesse maneuvers in his pass rush repertoire and may never find a move that works effectively for him.

He's perfectly built for the role of a run stuffer and his play at the Senior Bowl and the 2021 college football season showed that he can make an impact on a teams run defense. He's got some traits that could make him a potential pass rusher but his role on a team will be in the interior of the line making a mess of run plays and allowing his teammates to make plays around him. If he can improve ability to move around in space a bit, a team could have a potential three down starter on their defensive line.