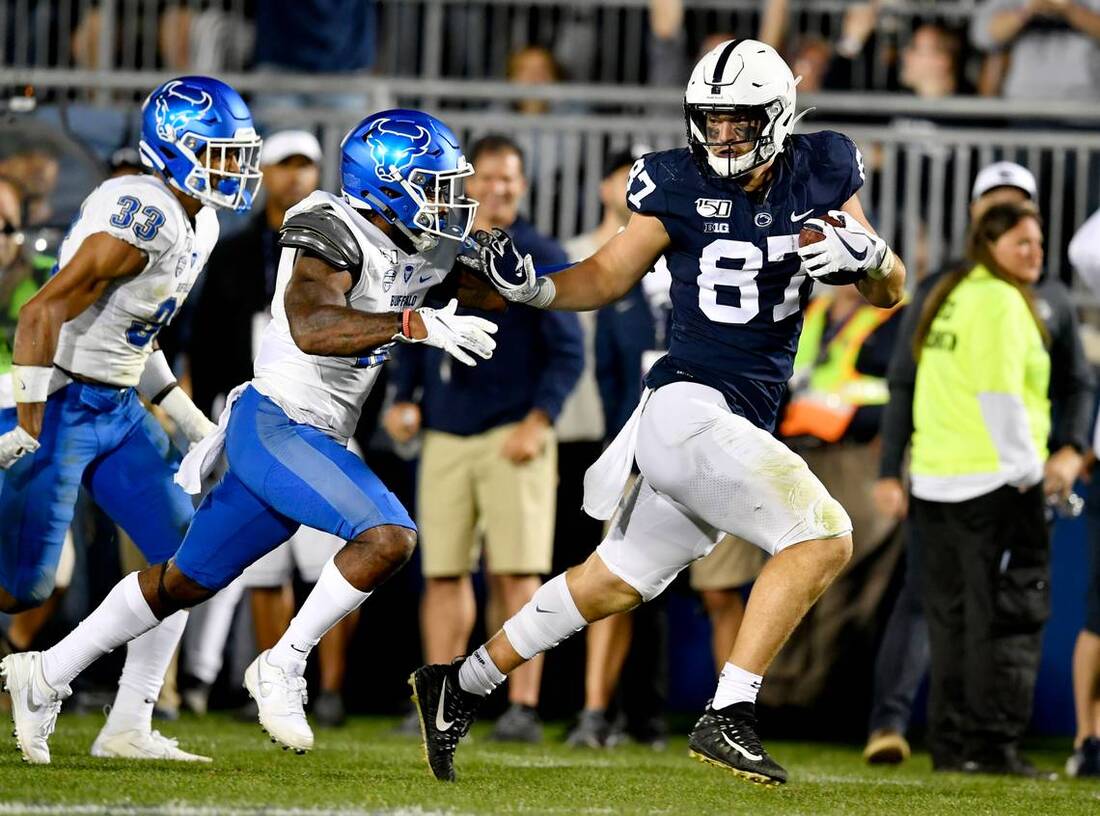 I hate it when scouts or analysts give tight ends the nickname "Baby Gronk'' but Pat Freiermuth has shown enough promise on the field to earn that name. He's a big bodied tight end at 6'5'' and 260 lbs. with a very athletic build and athleticism to match. He's got excellent hands and long arms giving him an incredible catch radius to hall in passes. He's got very good speed, especially long speed, to pull away from linebackers and safeties in coverage and catch a pass over the middle. He does a nice job of getting a good release from defenders and getting open quickly. He can recognize holes in zone coverage very well and can be trusted early in the NFL on option plays. He's got some serious hops for a tight end which makes him a very valuable pass catcher when a quarterback has to make a quick throw in his direction. His ability to make catches in the red zone are the best in this draft because of his natural ability to box out defenders and create space. He's got a good feel for the boundaries which can make him a valuable asset in any west coast offense in the NFL. He's an absolute stud after the catch for a tight end and can really put the "Baby Gronk'' comparison to the test. He's a surprisingly great route-runner not only for his size and possesses an advanced route-tree for this stage in his career. Was a clutch offensive weapon in the Penn State Offense and when a play needed to happen, they turned to him. He has a lot of power in his lower body that allows him to break tackles and carry defenders for extra yardage and when he has to cross a line on the field, few can stop him. He's been a good blocker in the run game and is willing to engage defensive lineman as well as linebackers, making him a tremendous asset of a rushing offense.

My biggest issue with Freiermuth is that he has an issue with keeping his balance after the catch and can at times stumble. He can be susceptible to getting tripped up and tackled by corners and safeties in the open field and should work on using his strength more in the open field. He seems to lack a lot of evasive maneuvers like incorporating a stiff arm and attempting more jukes in the open field. He does benefit from the team being a rushing offense primarily and can find himself open more often than most. He suffered a season ending shoulder injury in 2020 that required surgery to fix and teams are going to need to monitor the injury throughout the draft process.

Freiermuth's size and style of play are reminiscent of Rob Gronkowski but comparing him to one of the greatest tight ends in NFL history would be a major stretch but his potential as a balanced tight end is very good. If his shoulder injury checks out and a team in need of a tight end feels comfortable drafting him, he could be a sneaky pick at the end of Day 1.