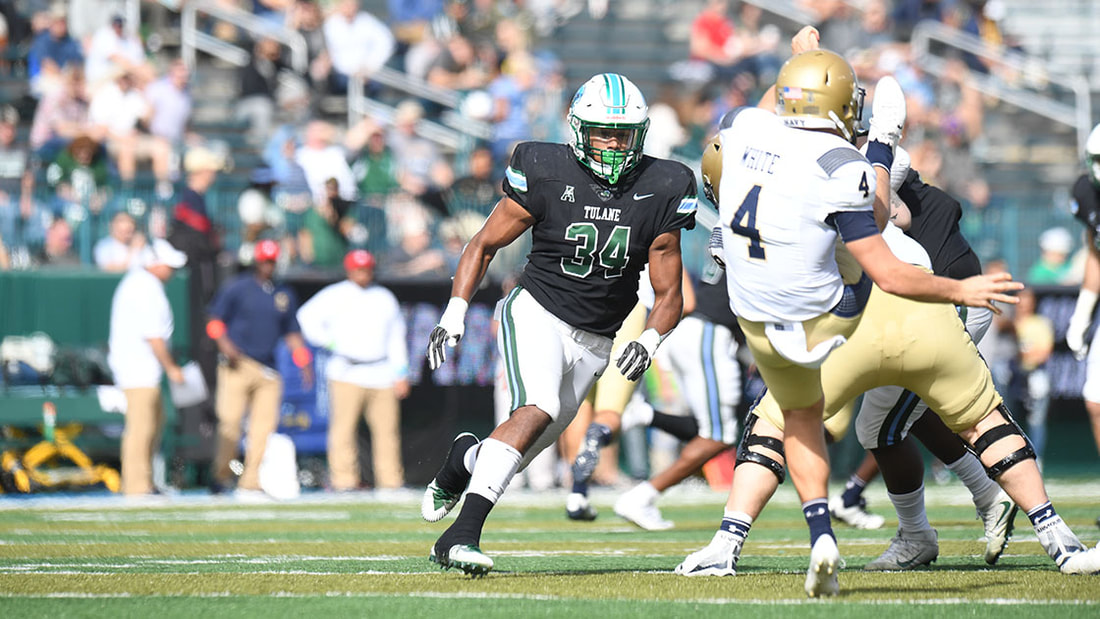 Tulane's Patrick Jones was a menace off the edge in 2020 and has more than earned . At 6'3" and 255 lbs., he possesses excellent strength and stamina. He's got an incredible bull rush that is reminiscent of James Harrison where his low center of gravity and power in his arms and chest allows him to easily walk back offensive tackles into the quarterback. He's a violent hand fighter that plays with a bit of an edge. He's got a vicious rip move and swim move that has won him a lot of battles off the snap. He's got some flexibility which makes him a dangerous pass rusher with his ability to bend the edge. He does a good job of holding his end in run defense and has enough power to stack offensive tackles. He's got a fiery motor that doesn't quit. He's got experience playing with his hand in the dirt and is effective in a 4-3 defense as well as a 3-4. Always plays with great pad level off the edge which is why his bull rush is so effective. When he finds a weakness in a offensive tackles technique, he will exploit it and dominate them all game. He's a nasty player overall and is going earn a fan club among defensive coaching staffs. He has great instincts as a pass rusher and does a great job of attacking the football and looking for strips. Coaches are going to be very pleased to see his rebound 2020 season that saw his production increase tremendously. He was used everywhere for the Green Wave defense and showed enough ability in coverage to be a 3-down player. He possesses a very good counter rush game with an effective use of inside spin moves as well as nice club move. He has good agility and can flow with a line effectively without getting caught in the wash. He's a good tackler and if he has a clean shot, he can light up a ball carrier. He does a good job of fighting through double teams and has enough flexibility to squeeze through blocks.

I don't see enough burst or speed in his game which could give problems if he can't win with power in the NFL. His arm length is on the short side and has trouble with offensive tackles that can beat him with size. He plays for Tulane which doesn't play against the power 5 schools in college football and most of his competition won't see an NFL field. He doesn't have the speed to chase down running backs and has had players turn the corner on him even when he gets the better angle. He played with another productive defensive lineman in Cameron Sample who helped rush from the inside and outside, giving Johnson plenty of one-on-one matchups with offensive tackles.

His lack of speed and agility as well as only modest length make his ceiling a bit limited but players with deficiencies have still found great success in the NFL. If he finds himself in a 3-4 defense in the NFL and continues polishing his skills, he could be a very reliable outside linebacker and a 3-down player.