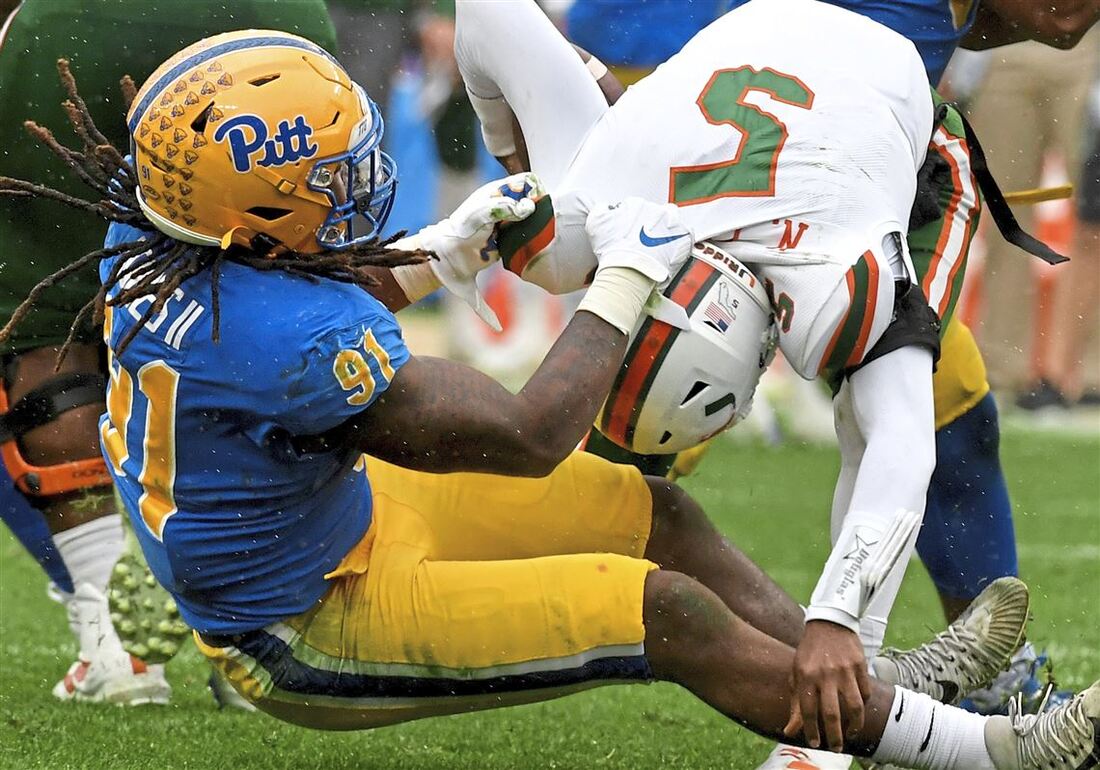 The Pitt defense was excellent in 2020 and their dominance was led by pass rusher Patrick Jones II. He's a prototypical defensive end at his size of 6'4" and 260 lbs. with long arms and excellent agility. He's been one of the most productive defensive ends in the ACC and has improved each season he has played with the Panthers. He's got a very good swim move that is very quick and is aided by his quick footwork. He's got the desired length for the defensive end position in the NFL and should draw interest for teams in a 4-3 defensive scheme. He's very good at establishing the better leverage at the start of the snap which allows him to shoot gaps and bull rush offensive tackles. He's very flexible and can bend the edge when he gets a decent get off. He is incredibly quick for a man his size and has shown in run defense that he can change direction on a dime. He takes great angles when making tackles and has strong hands to latch on and drag down ball carriers. He's a very experienced hand fighter and brings a great deal of counter rush moves such as inside spin, an inside stunt, and a very good club move. He has underrated power in his upper body and if he gets under an offensive tackle's pads they usually go for a ride. He possesses an excellent spin move that can put offensive lineman in a loop. He's a very good run defender who does an excellent job of staying patient and allowing a play to come to him. He's very quick to attack once he sees the ball carrier and does a great job of squeezing through cracks in a line to make plays. He gives great effort on every snap and has a very good motor.  He's very good at causing fumbles either punching the ball out of a running back's hands or stripping a quarterback and that's a trait that NFL teams covet in a defensive end. He has exceptional closing speed when he locks onto a ball carrier and chases them down. He possesses good explosion out of his stance at the snap of the ball and maintains excellent pad level through his progressions.

He needs to significantly add more power to his lower half as he finds himself on the ground too much. He has poor balance in his feet and doesn't recover well if he gets caught by the offensive. He benefited a lot from Jaylen Twyman demanding double teams and drawing most of the attention from offensive lines in 2019 as well as having another good rusher in Rashad Weaver forcing quarterbacks to run into his territory. He's quicker than he is fast and can find himself getting burnt up field if running backs can bet his angle. He's not a good tackler which is surprising given his size and strength and too often finds himself grabbing jerseys and dragging rather than wrapping up and bringing down. He has the potential to play in a 3-4 but most of his production and snaps came from lining up with his hand in the dirt, making him a pigeon holed prospect.

Patrick Jones II proved in 2020 that he can make plays with interior pressure giving him an advantage but he showed not only in games in 2020 but at the senior bowl and workouts that he has a ways to go when it comes to the development of his lower half. He's technically sound and has good potential to develop into a starting caliber defensive end, but he won't do anything until he builds up power in his legs.