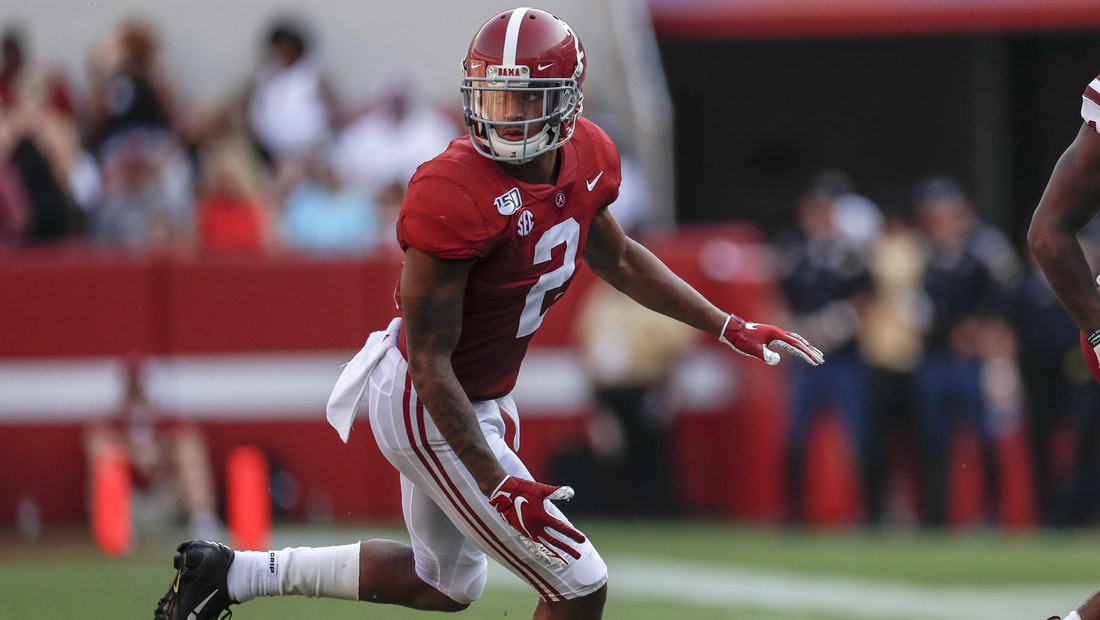 The other top cornerback in this draft that is very comparable skill wise to Shaun Wade is Patrick Surtain Jr. and he has his own traits as a cornerback that could make him possibly the 1st defensive player off the board. Surtain Jr. comes from NFL bloodlines with his father being a 3-time pro bowler for the Miami Dolphins. Surtain Jr. is a very big cornerback at 6'2" and 205 lbs. with elite level athleticism and excellent instincts. He's an elite level press cornerback with the size and strength to bully any receiver in college football and in the NFL, oftentimes taking his man completely out of play. He's always looking to turn the ball over whether it's stripping the football  out or picking the ball off. He's probably the best cornerback Alabama has ever had when it comes to run defense and tackling. He's a fearless defender when having to come up in run support and if he locks on to a ball carrier, he's going to lay the wood. He's got some explosive hops, even for a cornerback, and is a match-up nightmare for receivers on 50/50 balls. Very good hands when coming down with an interception and is a fighter for the football once the ball is in the air. His tenacity and effort are easily noticeable on the field and often can energize his team. He plays man coverage with great patience and anticipation and his timing when attacking the football is very good. His length in his arms makes life difficult for quarterbacks throwing to his man and they almost always have to thread the needle in his direction. His football IQ is among the best in the draft probably due being around the game all his life and you clearly see his attention to detail. Was rarely targeted at Alabama as SEC quarterbacks feared throwing the football in his direction.

Not enough experience in zone coverage in the vaunted Alabama defense which somewhat limits the defenses he can thrive in. He plays with an exceptional cast with a lot of Alabama defenders likely to not only get drafted, but taken early. Nick Saban's defense's do a great job of hiding weaknesses in a cornerbacks game and Alabama cornerbacks don't have the best track record in the NFL. Not a lot of burst on the ball in zone coverage and I would like to see more range in his game. He can have trouble at times guarding the shiftier receivers in college football and may need coaching in his footwork to fix this issue.

He's lived around the game of football all his life and has seen what success looks like, given how his father played the game, and should be more of guarantee to succeed in the NFL more than any other Alabama cornerback to come out in over a decade. His style of play, tenacity, and rare size and athletic ability for the position make him a very marketable player and likely a top 10 pick in the draft. He's got a very high floor for a prospect and a promising future ahead of him as a man and press cover corner in the NFL.