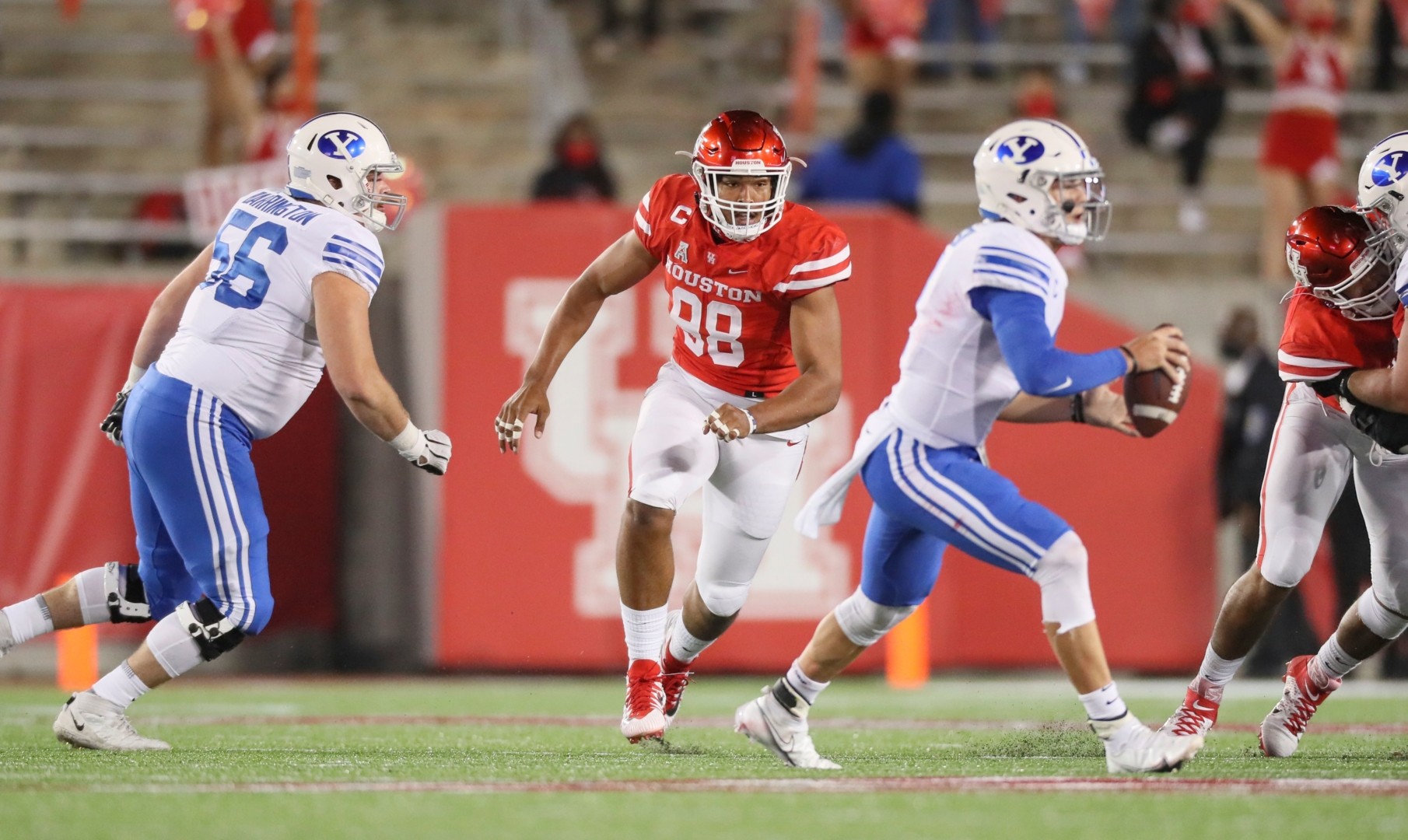 The Houston Cougars may have had a so-so season 2020 but defensive end Payton Turner put himself on the map with his stellar play. Standing at 6'6" and 275, Turner possesses freakish size and elite level athletic traits for a position that can never have enough of both. He's very athletic and has enough speed to create tremendous mismatch problems for offensive lineman. He has oak branches for arms and very strong hands and when gets a hold of his opponent, they are usually back pedaling out of the play. He lined up all over the front 7 for the Cougars and brings a lot of versatility to a defense. He's more flexible than a man of his size should be and could possibly be an effective edge bender with more improvement. He utilizes a very effective push and pull move, a club move, and quick swim move which seemed to be more effective with each game in 2020. He possesses a very powerful upper body and a tremendous strength in his hands and when bull rushing his man off the line. He's surprisingly nimble on his feet for a man of his size and doesn't easily get evaded by ball carriers running to his side of the field. He does a great job of utilizing his length to disrupt passing lanes and bat throws down. He's very powerful at the point of attack and will gain ground early in his bull rush if his opponent doesn't play with good leverage. He played in a two point stance in college and flashed a stutter-step move that could beat slower offensive lineman off the snap. He's a violent tackler when his man struggles to go down and will often throw them down with authority. He's an incredible effort player and plays one of the hottest motors you'll find in the draft.

He wasn't done any favors playing for Houston because the Cougars never played at a position long enough to feel comfortable. Too often did he look lost at times playing defensive line or stand up on certain plays and mainly won with effort and his athleticism. His first step explosion was inconsistent either because he doesn't time snaps well or he's waiting to see how his opposing lineman blocks him. He doesn't play with a good pad level which isn't surprising given his height. He has no counter rush game to speak of outside of thrashing and clawing his opponents grip from him. He can tackle quarterbacks too high at times which make him a target for personal foul calls in  the NFL.

It's always a bit infuriating to see a player with his potential be used so poorly by a team but if given a single position on defense and asked to learn and hone his skills, a team could have a special player on their roster. I think his home is a 4-3 defense playing end with the occasional opportunity in the middle of the defensive line. He's a boom-or-bust player in this draft and could be a steal if put in the right situation.