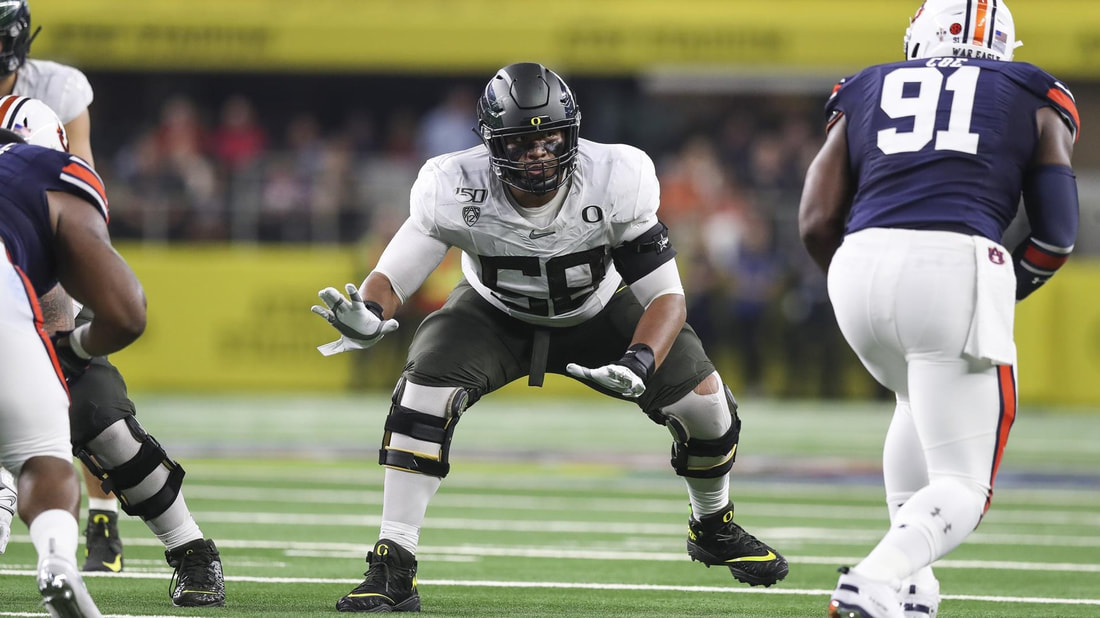 If Penei Sewell had been able to enter the 2020 NFL draft, he would have easily been the 1st offensive tackle off the board, he's that gifted. Penei Sewell is one of the most physically gifted offensive tackles in this draft at a muscular 6'5" and 325 lbs. and has never been outmatched by a defender athletically in his college career. His strength and mobility rank among the top 3 in the draft if not at best and is going to be a very big problem for NFL defensive lineman to handle in the pros. In the run game, Penei comes off the football like a demon and he's looking to run defenders over and drive them into the turf. He plays with a very wide base and his powerful legs can absolutely move even the bigger and more powerful defensive lineman off the ball with ease. He's very low off the ball and establishes tremendous leverage very quickly, ensuring that he wins the battle. He's very eager to get to the second level after destroying his first guy and will look to go head hunting for linebackers when reaches them. He's no stranger to leading a convoy for his running back and allowing him to break open a big run up field. In pass protection, he's extremely quick off the line and his ability to mirror defenders off the line is easily the best in the draft. His punch is vicious and violent and will knock most defenders off balance, if not off their feet. His powerful upper body and impressive quickness and balance makes quick work of bull rushers. His arm length is good enough to keep defenders out of his chest and keep them at a distance. He was Justin Herbert's best asset on the Oregon offense in 2019 and a huge reason for he was selected in the at #6 in the 2020 NFL draft. He's a nasty finisher when he gets his man off their feet and will plant them into the dirt when given the opportunity. He does a great job of riding his guy out of the pocket when they attempt to bend the edge and will throw throws out of the play. He's got the Tyron Smith pull and swipe move ingrained in his when his guy tries to slip by quickly. He's very good at getting his hands into his opponents chest and it's almost impossible for defenders to break off.

He can at times rely on his physical ability and against the more technical pass rushers he can be prone to letting them slip by. His arm length is good enough but he may suffer early against experienced NFL defenders with longer arms. He can at times struggle against heftier defensive lineman, usually athletic tackles that bounce outside, and if he loses his pad level he can go for a ride.

I know there is no such thing as a perfect prospect or a guaranteed hall of famer in the draft, but Penei Sewell is as close as you can be to that level of praise. A great pro comparison for me is Trent Williams who is likely to get a gold jacket when he decides to hang up the cleats for good and any team lucky enough to be in a position to draft him should do so without hesitation. He's an elite level prospect and is likely to be a perennial pro bowler in his career. If Penei Sewell falls out of the top of the draft he will be the steal of Day 1.