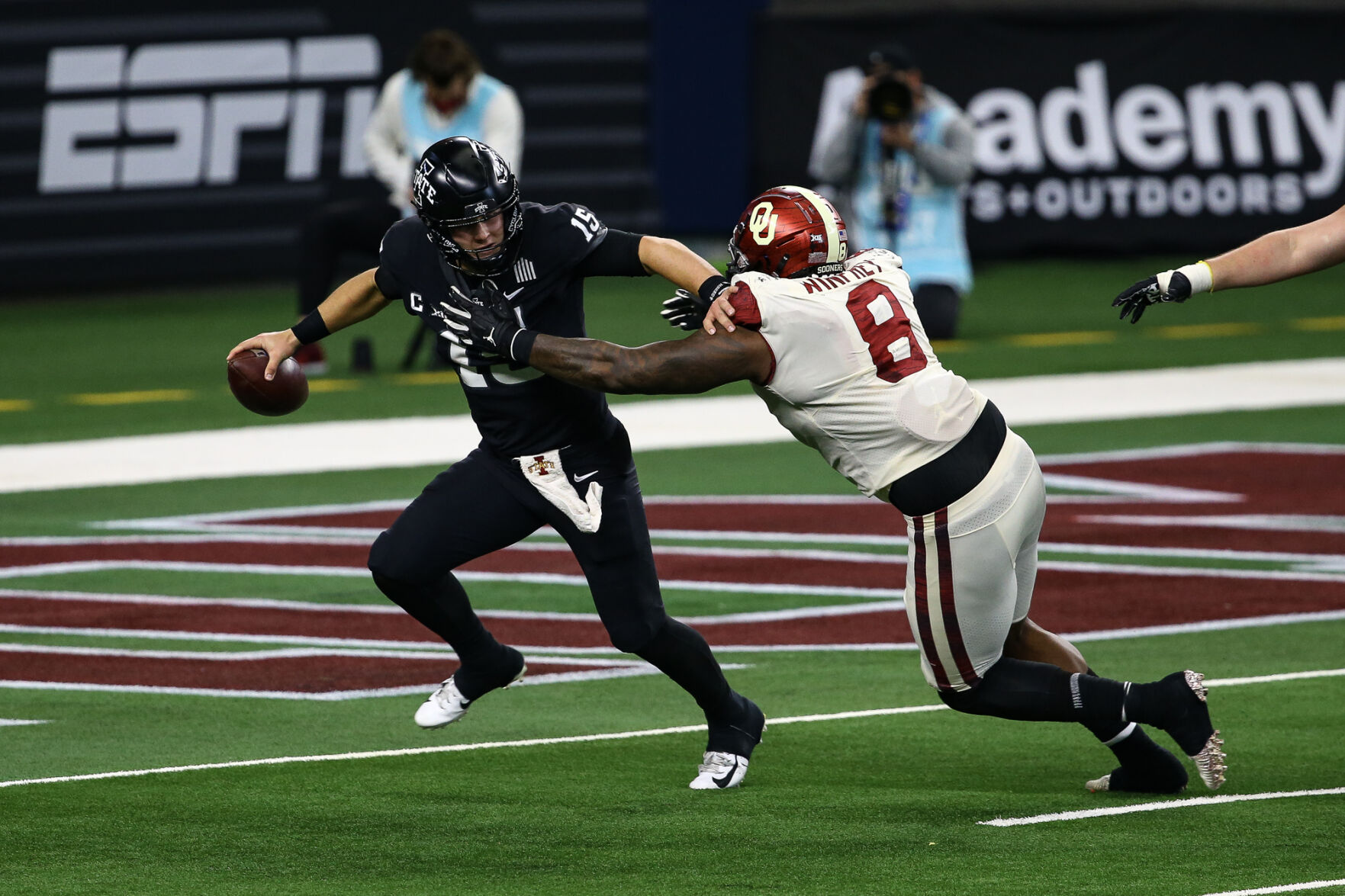 Photo by Trey Young-The Daily
Perrion Winfrey was one of the most sought after JUCO recruits in recent memory and not only did he improve the defensive line in his two years for the Sooners but he thrived in their system. At 6’4” and 300 lbs. Winfrey possesses excellent athleticism and power. He has one of the best get-offs at the snap among all defensive tackles in the draft and it’s where most of his production originates from. He comes off the line with an impressive blend of speed, power, and explosion and can overwhelm offensive lineman very early in a play's progression. He has a very powerful punch off the line and can uproot squatty guards that try to out-leverage him with pad level. He has excellent grip strength and huge hands for his size and when his mits latch onto offensive players, they don’t break loose. He has a ridiculous bull rush up the middle and can be a pocket collapsing machine when he gets his legs under him and drives lineman into the backfield. He possesses great speed for an interior defensive lineman and has shown to burst through into the backfield and run down quarterbacks and running backs quickly. He has good enough arm length for an interior lineman to keep most guards and centers from attacking his chest pads. He’s a vicious hand fighter in trenches and does an incredible job of swiping, slapping, and clubbing the arms of offensive lineman to keep himself free from their grips. He takes on double teams with violence and determination and can be very difficult to stay in front of when he’s thrashing through punches and grips. He has good flexibility in his frame and does a great job of absorbing contact and keeping his balance. He has good agility and twitchiness in his lower half and has multiple plays that involve him doubling-back and making tackles. When his rush fails, does a nice job of raising his arms to disrupt passing lanes, keeping himself productive during the play. In run defense, he’s a big rock in the middle of a stream because all running plays by an offense seem to have to go around him. He’s very good at digging his feet in against double teams and holding his ground, often forcing ball carriers to cut outside of the middle. He’s one of the best block shredders among his fellow defensive lineman with his tenacity and athleticism to club and rip through lineman. He’s a great tackler that has more than enough grip strength to latch and drag down ball carriers with one-arm. He has more than enough power in his frame to push into lanes opened up by offensive lineman and force the running back to cut outside. He possesses good lateral agility and does a nice job of flowing with the line and staying in the play on outside runs, often driving the running back out to the boundary line. He has excellent versatility as a defensive lineman with snaps taken everywhere from nose guard, 3-tech, 1-tech, and 5 tech end and has shown himself to be effective at every one of them. He’s a high motor defensive lineman who doesn’t until after the whistle is blown. His JUCO-to-Power 5 school college shows a player with incredible discipline and determination which are the foundation for success in life, not just football and those traits NFL coaches search for in a player.

He’s very raw as a prospect and while it’s easy to fall in love with his production and athleticism in the middle of the defensive line, his lack of technique holds him back. He comes off the line with too high pad level which often results in him having to fight through more contact than he should have to. His high pad level gives offensive lineman more of a chance to attack his chest pads and force him to fight blocks with a greater degree of difficulty, often taking him out of the play. While he has a tremendous bull rush, he doesn’t appear to have any go pass rush move that he can rely on and when using rush moves you can tell he’s still learning how to properly initiate moves. His swim move can be overdrawn and slow at times giving lineman a chance to attack his ribs. His spin move can be applied very late in a rush attempt and often seems to be used simply to shed blocks and double-back towards the play that has gone by him. He doesn’t appear to use a rip move or a push-pull move in the line which is a little surprising given his athletic ability and exceptional power in his frame. He doesn't have a counter rush move in his arsenal as well and that often forces him out of the play with his inability to slip pass protection if his bull rush fails. He only has two seasons of play against quality competition and his only full season of starts was in 2021.

Perrion Winfrey is going to be a hot commodity come draft day if he shows out at the NFL combine and aces workouts with teams because he’s an easy player to like when you watch film. I don’t like making comparisons with prospects because oftentimes the comparison is wrong but he does play eerily similar to Jay Ratliff, 4-time Pro Bowler and All-Pro defensive tackle, with his ferocious play, exceptional athletic traits, and versatility. If Winfrey can polish his overall technique and work on keeping his pad level down, he could be a very special player in the NFL and could be a quality starter early in his NFL career.