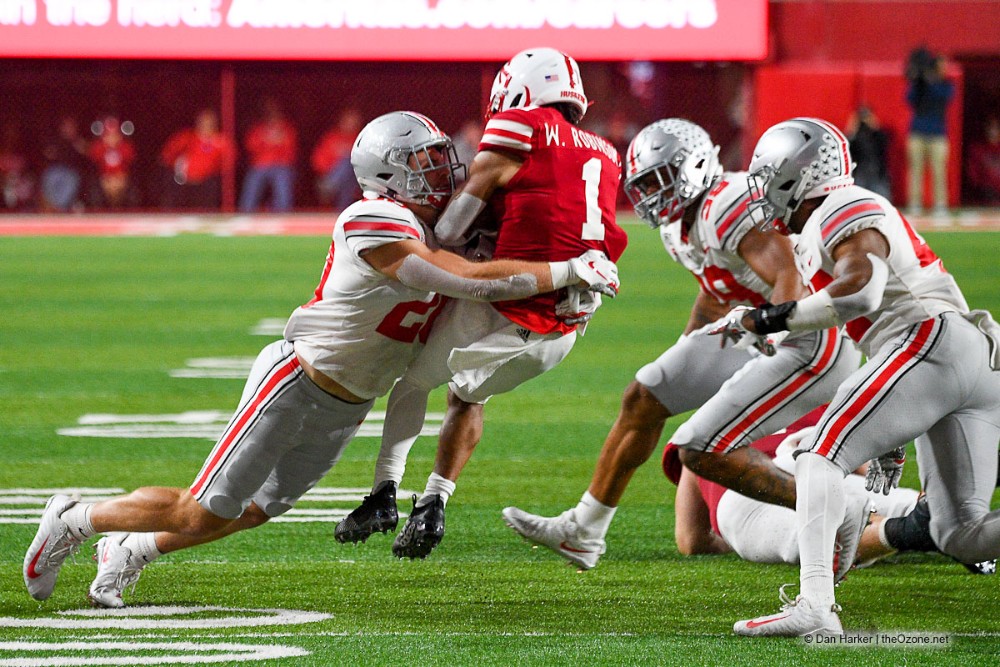 Ohio State in 2020 featured the best linebacking corps in the country and the most feared member of that group was Pete Werner. He's a big linebacker at 6'2" and 240 lbs. with great power and toughness. He's a physical finisher as a tackler and can lay the wood on running backs that cross his path. He has a very strong upper body and rarely needs backup when making a tackle. When he grabs on to a ball carrier, he has a strong enough grip to hold on and drag down. He's a heads-up form tackler and doesn't get moved easily when tackling head on. He has great instincts in run defense and knows how to read plays and attack the running back in the lane. He has a nose for the football and never finds himself too far from the end of the play. He's more than willing to attack the teeth of a defense and plays without fear when facing offensive lineman. His powerful frame allows him to absorb blocks better than most linebackers in this draft and maintain his balance, allowing him to stay in the play. He plays with an incredible motor and stamina and never left the field in 2020. He brings a lot of power at the point of attack when engaging blockers and has enough power to stack lineman and shed when needed. When he sees a gap opening in the running game, he brings enough power and aggression to collapse the gap and make the tackle. He's a great communicator at the line and makes sure his teammates are on the same page. He did an excellent job of causing fumbles in 2020 by punching and ripping at the football every chance he could. He understands how to play shallow zone coverage very well and never seems to be out of place when covering the slot. He's very aggressive when having to cover tight ends and has enough speed to stay in their hip pocket.

He's not the most agile linebacker in the draft and players have been able to beat him with speed. He has enough speed to pursue for a short while but running backs have been able to turn the corner on him when they turn the jets on. He can struggle at times in the open field and fall for juke moves. He takes bad angles at times which can really hurt his ability to make tackles on stretch and pitch plays. Slot receivers can give him trouble in man coverage and with quickness and separate from him quickly. He's not a great blitzer which is surpassing given his style of player and isn't going to put sacks in his career. He can get overaggressive when attacking gaps at times and bite on read-options and play action.

He's a prototypical inside linebacker that will make a strong impact in a team's run defense. He's a tough and rugged linebacker that's going to make the tough plays when needed and that's a quality all 32 teams want in a linebacker. He should be a starter within his rookie contract and could develop into a quality run defender in his career.