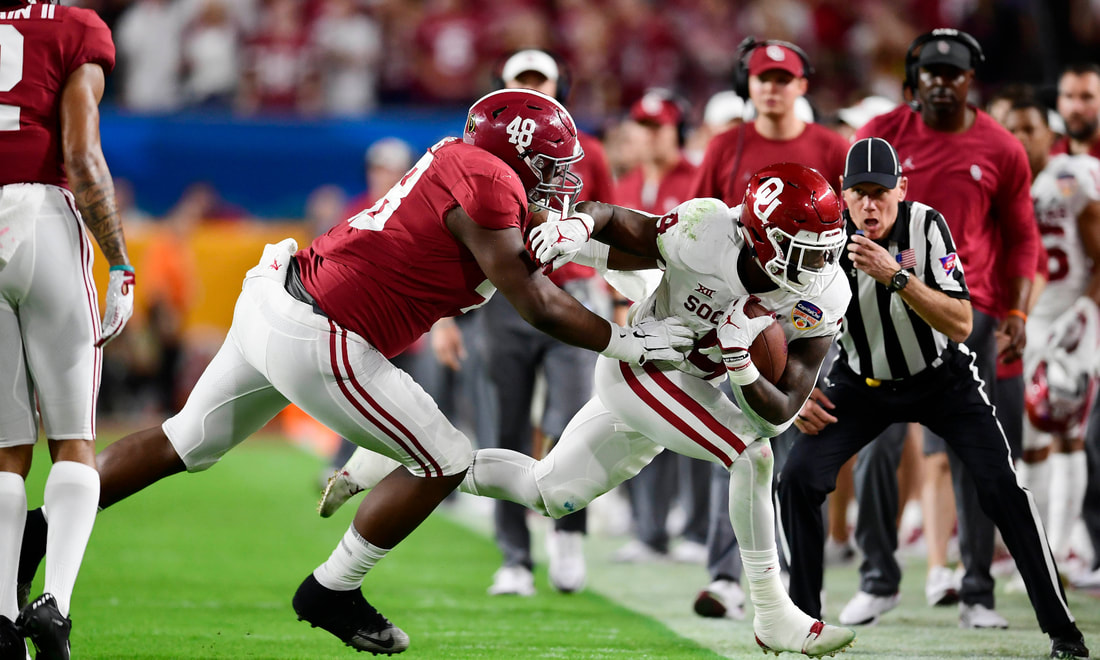 Photo by Tommy Gilligan-USA Today Sports
Phidarian Mathis is the next defensive lineman to come out of Nick Saban's Alabama Crimson Tide defense and, like most of his former teammates that have been drafted, he should find his niche in the NFL relatively quickly. He's a classic Alabama defensive lineman in terms of size at 6'4'' and 315 lbs. with exceptional length in his arms and exceptional power in his frame. He has impressive power in his upper body and core which makes him an immovable object in the middle of the line. He comes off the ball with good pad level and good explosion out of his stance and does a great job of using his length to create distance from offensive guards and centers. He has decent flexibility in frame and contort a little to make a tackle if need be. He has a monstrously powerful punch out of his stance that on more than one occasion knocked an offensive lineman off the ball and allowed him to simply run through them. He has big, heavy, and powerful hands behind his punch and when he gets into a lineman's chest pads it can be game over quickly for them. He has one of the best bull rushes in the draft when the stars align for at the point of contact and can collapse pockets from the inside with ease. He has above average agility in his feet for a man his size and has enough shiftiness in his lower half to make a good pass rush in the middle. He has a very powerful push-pull move that can get him free up the middle and an excellent swipe that can create his own lane practically if he hits it right. He's a phenomenal hand fighter in the trenches that plays with both quickness and violence when swiping and clubbing offensive lineman hands and arms when they try to get ahold of him. He does a phenomenal job of putting his hands in the air at the line of scrimmage to disrupt passing lanes and his excellent length has gotten a few batted passes in his career. He’s at his best by far in run defense as he will hold his ground at all costs in the middle. He does a great job of digging his heels in the ground for runs up the middle, often forcing them to bounce outside his gap. He's the definition of a space-eater for Alabama and commands at least two offensive lineman to block him on every play. He does a good job of deconstructing double teams and clogging the middle of the trenches, allowing his fellow players to win mismatches and wreak havoc in the backfield. He’s an aggressive block shredder and can play angry when he locks onto the ball carrier. He does a great job of diagnosing the offensive run quickly and either collapses the hole or meets the ball carrier in it. He’s a great tackler with his powerful grip and long arms and bringing down ball carriers has been little issue for him in his college career. He’s sneaky good at punching and stripping the football from ball carriers and causing turnovers, a skill that defensive  teams love in a player. His production jumped significantly in 2021 despite having to share snaps, as all Alabama lineman have to do, which certainly shows his massive improvement overall as a player. His motor and overall athleticism has vastly improved from his 2020 tape and has helped fill the void left behind by Christian Barmore’s departure very well. He has some scheme versatility with snaps taken as a nose guard, 1-tech, and 5-tech end in college and will likely fit those schemes in the NFL.


He’s very raw as an overall pass rusher, even though he’s gotten better in 2021, and will likely only be a two down player in the NFL. One of his biggest issues heading into the draft will be his stamina and conditioning because one of the reasons Alabama kept him on a snap count is because he gets gassed out towards the end of games, an issue that will need to be addressed in order to succeed in the NFL. He possesses, at best, average speed for a defensive lineman and won’t be a factor in pursuit if having to run down ball carriers. He doesn’t possess many pass rush moves in his arsenal and will need to work broadening his repertoire in the NFL if he wants to see the field more. He doesn’t have a counter rush move in his arsenal either and will need to work on one in order to succeed in the NFL. His balance in his feet need major improvement as too often he can find himself slipping or collapsing when fighting through double teams. He carries some bad weight on his frame and will need to hit the weight room and treadmill a lot in training camp to bulk up his frame more. His pad level is inconsistent off the snap and can often lead to him freeing up his chest for offensive lineman to attack. He’s very top heavy as a defensive lineman and filling out his lower half will do him wonders in the NFL.

He's a great guy to have as a nose guard or a 1-tech in a defensive line given his style of play. He's an unselfish run stuffer and a good one too and teams are always looking for defensive lineman that can create blitz lanes for others. I wouldn’t draft him with the hopes that he develops into a pass rusher quickly, but he does have the tools to be a three-down lineman in the NFL. If he can trim the fat and become a more conditioned defensive lineman, he’ll be a great anchor on an NFL defensive line.