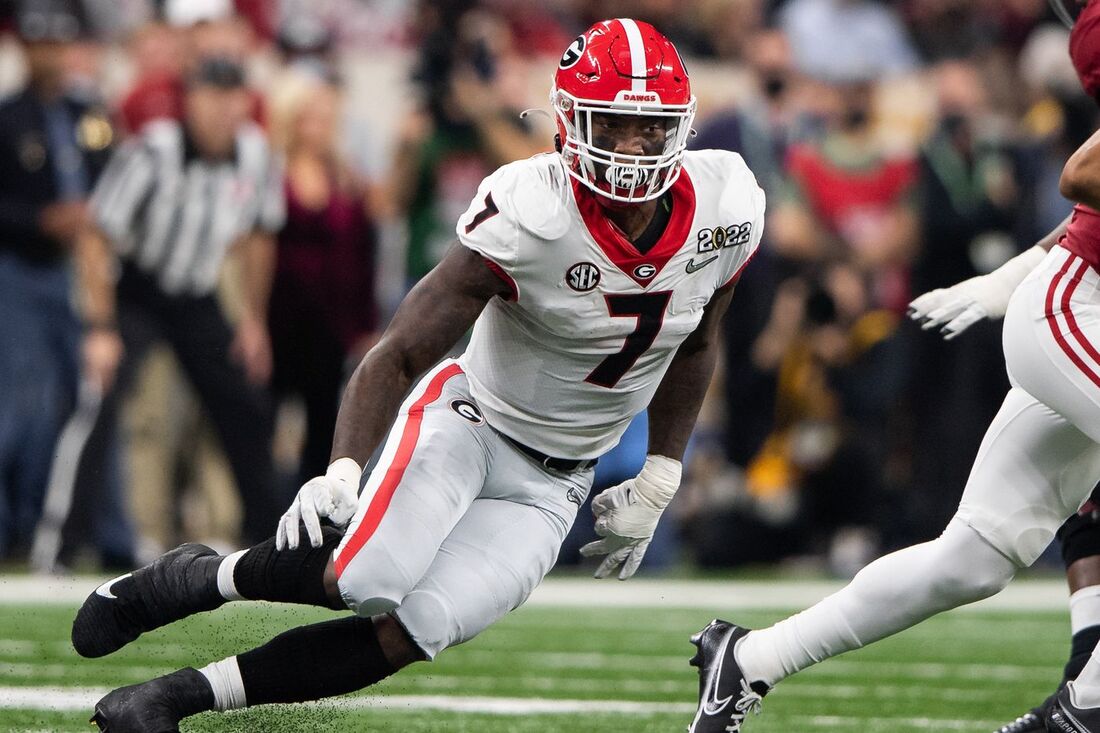 Photo by Zach Bolinger-Icon Sportswire via Getty Images
Georgia defenders have filled this 2022 NFL draft class and continue to climb up boards as their performances throughout the draft process have continued to impress scouts from all 32 teams and Quay Walker has stood out to many teams as a player with immense potential. At 6'4" and 241 lbs., Quay Walker brings exceptional athleticism, pass rush ability, and potential versatility to the linebacker position. As a run defender, he plays with good instincts and physicality at the line of scrimmage. He can run sideline to sideline to make plays in the run game which he did quite often for the Bulldogs and when he makes contact with the running back he can hit like a wrecking ball. He has very good length and extremely strong hands for a linebacker and has on more than one occasion wrapped up and thrown down ball carriers with vicious intent. He's great at squaring up his target in the hole of the line and has enough force behind and drive in his legs to halt any sort of forward progress. He's quick to diagnose run plays and blocking schemes early in their development and does a great job of snaking his way into the hole to make tackles. As a pass rusher, he has immense potential to be a chess piece on a defense as his size, length, and athleticism show a player capable of wearing multiple hats on defense. He's built like an edge rusher and when he attacks the line he's very good at using length, speed, and agility to create separation and squeeze into the backfield. He's great at keeping his eyes on the ball carrier which helps him stay close to the football at all times. Although the sack production won't show it, he's very good getting into the backfield as a pass rusher and often has forced quarterbacks into the arms of other defenders or has forced them to throw the ball away. In coverage, he displays good instincts at sniffing out screen plays and short passes and does a great job of tackling the receiver quickly. He's quick to his natural length to bat down passes at the line of scrimmage and has shown an ability to effectively cover tight ends and slot receivers in zone coverage. He's competitive on the field and his development week after week for the Georgia Bulldogs shows his work ethic on and off the field to become a better player.

It's the issue I have with all Georgia defenders in this draft, outside of defensive tackle Jordan Davis, that there is so much talent around him on the field that it allowed him and his fellow defenders to roam free and wreak havoc everywhere. His defensive line opened up huge holes for him in the interior when he blitzed with Devonte Wyatt, Travon Walker, and Jordan Davis making mincemeat of blocking schemes that allowed him run through and attack the line of scrimmage often unhindered. In run defense, his angles when pursuing ball carriers can be a little and potential running backs a chance to beat him around the edge or give them room to make a move on him. His only starting season came in 2021 on a stellar defensive unit and any critiques by teams need to be taken with a grain of salt. His coverage skills leave a lot to be desired currently and didn't have to face much adversity in zone or man in 2021 with his defensive line and fellow linebackers often destroying offenses with consistency. He can do a better job fighting through blocks at the line of scrimmage as sometimes he can spend too much time trying to run around lineman rather than having a plan to run through them. I would like to see him try and strip the football more when making tackles as he had plenty of opportunities to and learning to do so will benefit his career in the long run. His play strength at times, especially when taking on blockers, can be underwhelming and learning to play with more physicality against more physically imposing players is a must for his long term success.

Quay Walker might consider a project currently at his point in his career with lacking experience and whether his team helped inflate his production a bot. He possesses exceptional physical traits for a linebacker and could be a versatile piece on a defense but he'll need to really develop quickly in his game to find himself being productive in the NFL. He's a boom-or-bust prospect currently as a player but if he goes boom for a team, he could be a special player.