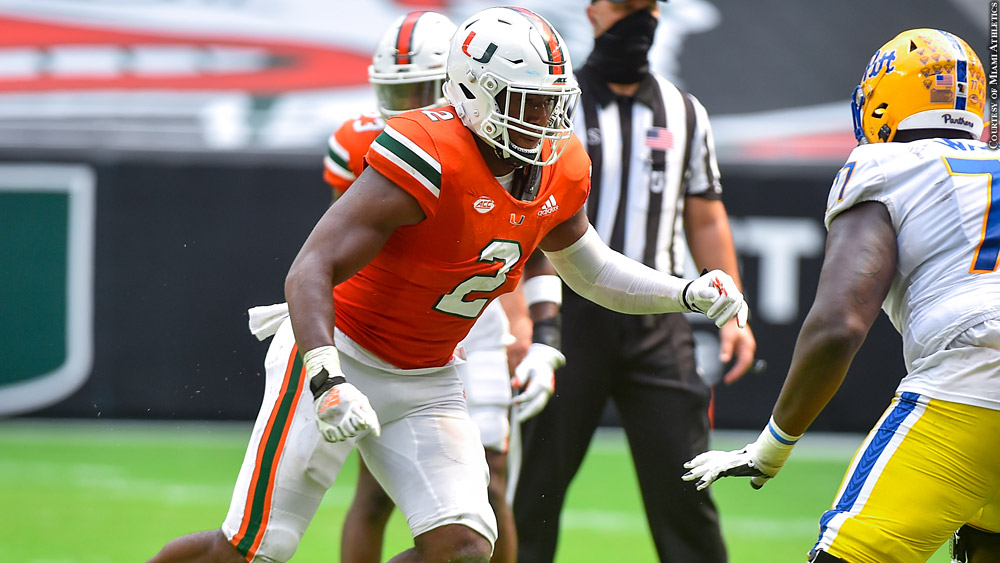 There hasn't been a transfer player with more hype than Quincy Roche out of Temple and in 2020 he showed at Miami that he was worth acquiring. He's perfectly built to play outside linebacker in a 3-4 defense at 6'3" and 245 lbs. with great athleticism and technique. At Temple, Roche was one of the most feared pass rushers in the ACC with his impressive first step and explosion off the line. Offensive tackles couldn't handle his raw speed and off the edge and he was constantly wreaking havoc in the backfield. He might be the most technically sound pass rushers in the draft as he has clearly honed his skill set and made adjustments when needing to do so. He can swim move, spin move, stutter step, push pull, dip and rip, and bull rush with ease and rarely found an opponent that didn't succumb to at least one of those moves. He has very good flexibility to bend the edge and make plays in the backfield. He's flexible like gumby and has shown little issue with ducking and bending past offensive lineman that he gets the jump on. He's incredibly instinctual as a pass rusher and has it ingrained in his DNA to go after the football when bending the edge or making a tackle. He was used like a chess piece for the Miami Hurricanes defense and consistently found success on twists and stunts. He plays with excellent pad level and has good enough length in his arms to make him an effective bull rusher. He does a great job of keeping his opponent out of his chest with hand swipes and chops and he uses each with phenomenal timing and placement. His counter rush moves such as his inside spin move and backside swim move.. He has great flexibility and has no problem bending the edge and dipping past offensive tackles. He's an incredibly consistent player and brings the same motor and competitive fire to every game he plays in. He's got some coverage skills in his game and any team that drafts him would be wise to at least experiment with him in space.

Roche is a phenomenal pass rusher but he's considerably lacking when defending the run. He doesn't have a lot of power to his game which can get him in trouble when he's holding his edge. He can sometimes take the bait on draw plays and while he does have the speed and agility to adjust quickly and chase, he gives up too many of those plays. He didn't produce on the stat sheet as much he should in 2020, even with the rise of Jaelen Phillips on the other side of the field, and while he still showed his ability, his lack of getting home on quarterbacks is concerning. He can struggle against offensive tackles that can beat him with length and he has trouble with disengaging from tackles. His size and style of play pigeon hole him as a 3-4 outside linebacker and most teams in the NFL aren't running that particular scheme, limiting his options.

He's currently a situational pass rusher with a high chance of being an every down player because few players in this draft bring the level of experience, reps, and production that he brings to the table. If he can quickly get up to speed in a 3-4 scheme and learn how to better handle run defense as well as show some effectiveness in coverage, he could be a great NFL player in his career.