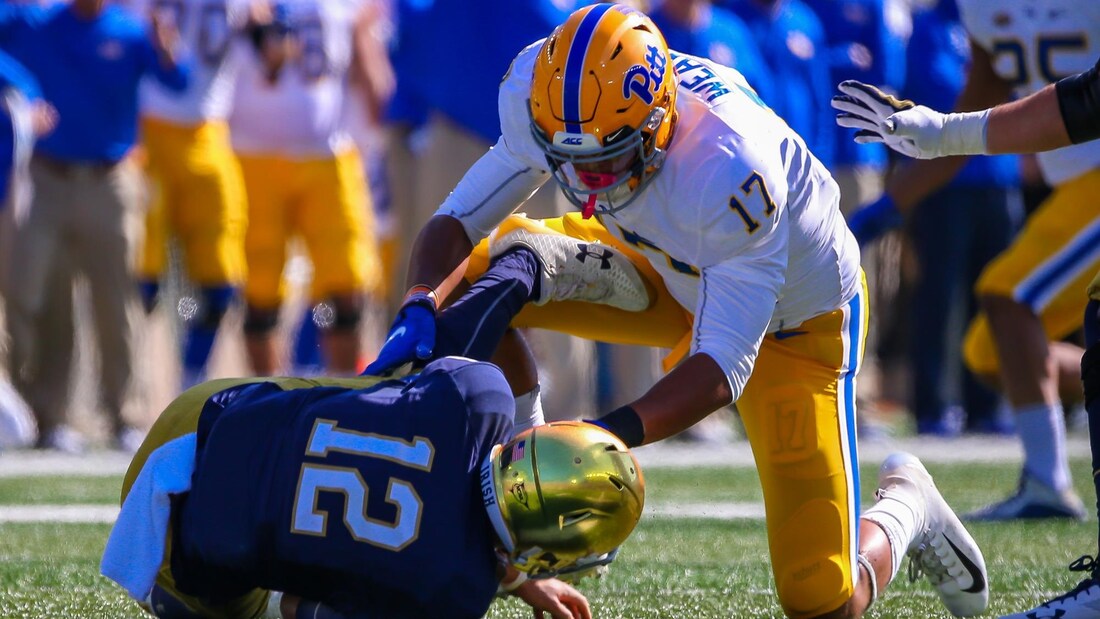 The Pitt defense featured one of the most aggressive pass rushing duos in the country with Rashad Weaver and Patrick Jones II with the former being by far the biggest surprise of the season for the panthers. At 6'5" and 270 lbs., Weaver brings the necessary size and length to thrive as a defensive lineman. He's a long defender that has a great deal of muscle mass in his build. He has long arms and a powerful upper body and can make quick work of offensive lineman that give up the chest to him. He comes off the line with great pad level and does an excellent job of using his leverage to uproot tackles and drive them back. He has a well built lower half and has the ability to drive and block his opponent's back into the pocket with ease. He's shifty for a man his size and can make offensive lineman pay for lunging at him and overextending to block. He's one of the most technically sound pass rushers in this draft as he uses an impressive array of pass rush moves like a push and pull, a chop, a club swipe, a swim move, and a menacing bull rush. He does a great job of getting his hands up in throwing lanes and batting down passes. and He's a student of the game with great instincts and a high football IQ and rarely finds himself away from the ball. He goes after the football when making tackles and is always a danger around the edge to cause strip sacks. He's a very seasoned hand fighter that knows how to counter punches from tackles and use them to his advantage. He's an excellent counter rusher who comes with plan B when his initial move fails him. He's at his best in run defense where his size, strength, and length help him hold up in run defense and maintain his ground edge on outside runs. He's very good at stunting inside and forcing runs to bounce outside and he does a great job of reading plays and reacting accordingly.

He's much quicker than fast for sure and can find run plays to get away from him if he arrives late. He's a stiff pass rusher and lacks the necessary explosion to be a threat to bend the edge. He's not going to run down running backs on the other side of the field and can find it difficult to sack quarterbacks that climb the pocket and take off. He can quit on plays that are out of reach for him which shows either a lack of conditioning or effort, either way it's not good. His size and lack of flexibility and speed make him strictly a 4-3 pass rusher. He doesn't use his length to it's full advantage at times and it can cost him against more athletic offensive tackles. He benefited a great deal from playing alongside Patrick Jones II who at times created pressure opposite Weaver, causing quarterbacks to wander his way.

Weaver's ceiling isn't great but he has a higher floor than some would expect from him if he played in a 4-3 scheme. His lack of versatility to play standing up is going to hurt him but it's likely to land him in the right situation. If he can further hone his skills, he could be a decent starter for defense.