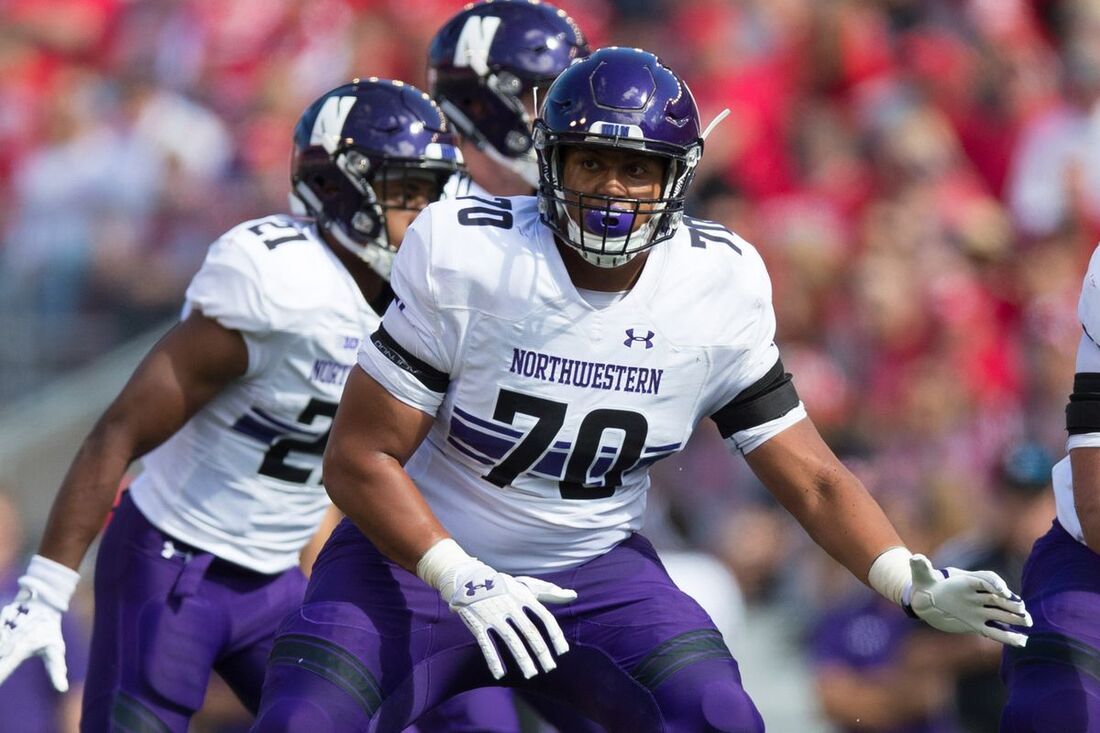 Northwestern's Rashawn Slater turned heads last season when he faced #2 overall pick Chase Young in 2019 and played surprisingly well for a small school tackle. He's built very well at 6'4" and 315 lbs. with exceptional upper body strength and impressive mobility. He's an impressive athlete for a small school prospect and rarely is outmatched by athletic defenders on the blind side. He possesses a very powerful punch that has knocked defensive ends to the turf and he uses it with good accuracy. In pass protection, he pops out of his stance with a good explosion and is quick to protect himself from inside slants and cuts. His active feet and great lateral mobility allow him to mirror pass rushers on the edge. He's very good at riding his edge rusher out of the pocket and has enough power to toss them out of the play. He does a nice job against bull rushes with his ability to take the bull rusher, stand-up them up, and drive them back. He also does an exceptional job of thwarting spin moves and counter rush moves by smartly allowing his opponent to lose balance and collapse on top of them. In the run game, he comes off the line with great explosion and pad level and usually the low man off the line. His impressive power and agility makes quick work of defensive ends and he does a good job of making blocks in the second level of a defense as well. He has impressive grip strength that can be impossible to break off when he's run blocking. He does a good job turning his defender out of the rush lane and is good to have on pulling blocks.

While he has played against, and at times dominated, Power 5 edge rushers he rarely faces players of the at caliber while playing Northwestern. His arm length is a bit shorter than most teams would like at the tackle position and it has come to bite him in his college football career. His pad level is too high in pass protection and it has gotten exploited on numerous occasions against more talented opponents. I would like him to develop more of a mean streak in the run game and look to run over defenders rather than into them. He lacks flexibility in his hips and it takes him at least a few yards to recover if a bull rusher wins the leverage battle. He can be inconsistent as a left tackle, often playing up and down to his competition.

His name has rocketed up draft boards as of late due to his exceptional skills in pass protection and highly impressive athleticism. Slater is going to be a constant talking point throughout the draft process and I doubt he finds himself waiting long to get drafted. He's not a top 10 player in my opinion but this sheep-think league is going to get a team to take him early. I think he has a great future at tackle but he's at the very least going to be a quality starter on an offensive line.