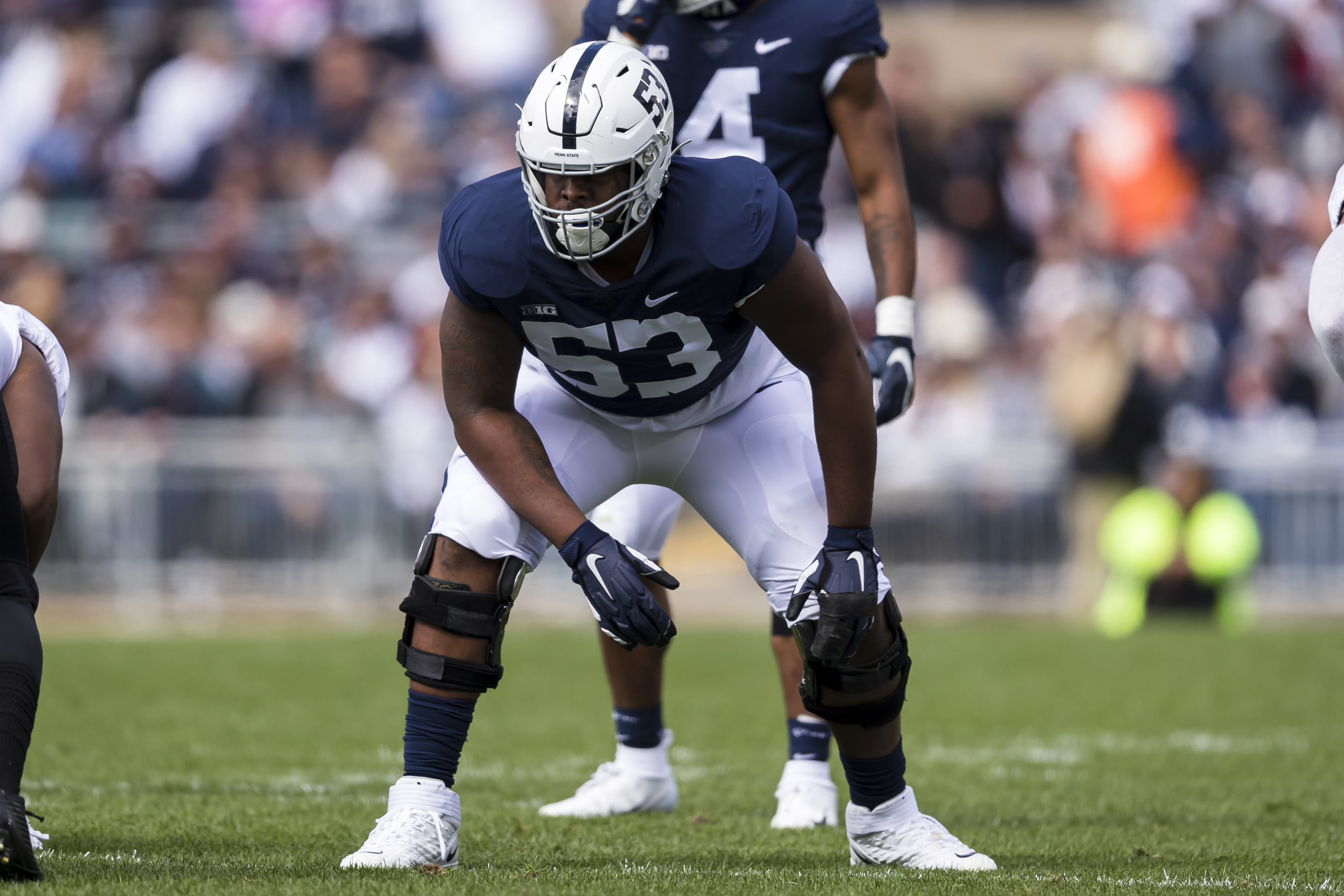 Photo by Scott Taetsch-Getty Images
Penn State has produced some freaky athletes in recent years and now has garnered a reputation among NFL teams as the school to focus on if you want NFL prospects that are off the chart physical specimens and Rasheed Walker certainly is going to turn heads at the combine and workouts with his athletic traits and physical build. He possesses elite size and length at 6'6" and 315 lbs. with a freakish athletic profile and malicious nastiness you can't teach. In pass protection, Walker displays exceptional explosion out of his stance with phenomenal agility and quickness in his feet. He's a very light footed offensive lineman who can look like he's gliding at times with his speed and agility and has the potential to mirror any and all edge rushers in both college and NFL. He has very long arms that have proven to be excellent assets at creative separation from edge rushers when keeping his chest clean. He's as mean and nasty a hand fighter as you'll find in this draft with his ax-like chops and vicious swipes and can often deter his opponent from getting into his chest too often. He possesses a very powerful punch out of his stance as well as from a stand-up position and while absolutely knocking the opposing defender off their feet or at the very least upend and stun them. When he gets his hands into his opponents chest pads not only is it usually game over with his vice-like grip but he will thrash and toss his opponent like a rag doll and try to bury them in the ground early. He's very good at throwing his edge rusher outside when they bend the edge around him, often resulting in a tremendous highlight of him man tossing a human being. He's a finisher of his blocks in pass protection and if he catches his edge rusher off balancing or slipping, he will plant them and keep them on the turf to put salt in the wound. He has a good anchor that's helped by his consistently low pad level and outstanding hip flexibility and knee bend allowing him to hold up against bullrushes very well. When run blocking, he comes off the line with great power, momentum and pad level and will drive his man off the line early. He brought the kitchen sink with him at the point of attack and was very good at creating holes on outside runs as well as collapsing the defensive line and keeping his rush lane clean. He's a bulldozer when asked to block edge rushers out of the lane with some of his blocks continuing 15 yards down field. In his three years starting at Penn State, he has helped pave the way for a litany of excellent running back talent which should help his resume in interviews with coaches. He brings a great deal of impact when making blocks in the open field and is looking to take defenders heads off when he lines up his target. He takes very good angles in the open field when making blocks and has more than enough quickness and agility to make blocks, and absolutely maul, linebackers and defensive backs in the open field. He's a tenacious and ultra-competitive player based on his tape whose refusal to give in has given his opposing defender very long and painful days on the field.

He might be the most raw offensive lineman in this draft when it comes to technique and fundamentals in pass protection and it's going to be a long coaching and development process for him to succeed in the NFL. He has major difficulties recognizing stunts and twists at the line and struggles to neutralize them on a consistent basis. His punches are often inaccurate and timed poorly leading to edge rushers either swatting his punches and getting by him with ease. Far too often punches outside the numbers which has put him in great danger of getting holding calls as well as leaving his chest highly vulnerable to bullrushes. He leaves chest open to attack too much for comfort and can struggle to reestablish control if a defender locks in. He has a tendency to overextend outside and leave cutback lanes for pass rushers in his inside gap giving his opponent a cutback lane inside. He lunges and overextends himself way too much when he faces speed rushers and has been prone to being shrugged off and tossed aside. He's been Penn State's starting left tackle for three seasons and to see him still have such struggles may scare teams away as he potentially has a very slow developmental process. His footwork, although fast and light, often can get compromised by his tendency to shrink his base which in turn can cause issues with his balance in his pass protection and fall victim to stronger and more technically sound rushers. The Michigan Wolverines Aidan Hutchinson and David Ojabo ate him alive on multiple occasions, as they did to everybody in college football, and showed how much growth is needed in Walker's game to become a competent NFL tackle. Spatial awareness can also be an issue for him as he has on occasion blocked his edge rusher into a sack or on occasion his defensive lineman into a running back likely due to his violent playing style and getting a better sense of where the ball is on a play will be key to his NFL development.

Rasheed Walker was a potential Day 1 selection in the draft before the Wolverines pass rush came into town and showed him, and hopefully other future draft prospects what happens when you simply just rely on athleticism and make refining and polishing your technique an afterthought as Michigan came into Pennsylvania and beat the breaks off him. He'll need major coaching issues and will likely have to play his first couple seasons at guard to become acclimated to the NFL before being trusted to man the tackle position. His athleticism, prototypical build, and nastiness should translate well into the NFL and are all traits that you can't teach in an offensive line prospect. He's a project with a ridiculous ceiling and if paired with a really good offensive line coach that doesn't rush his development, a team could have a potential quality left tackle.