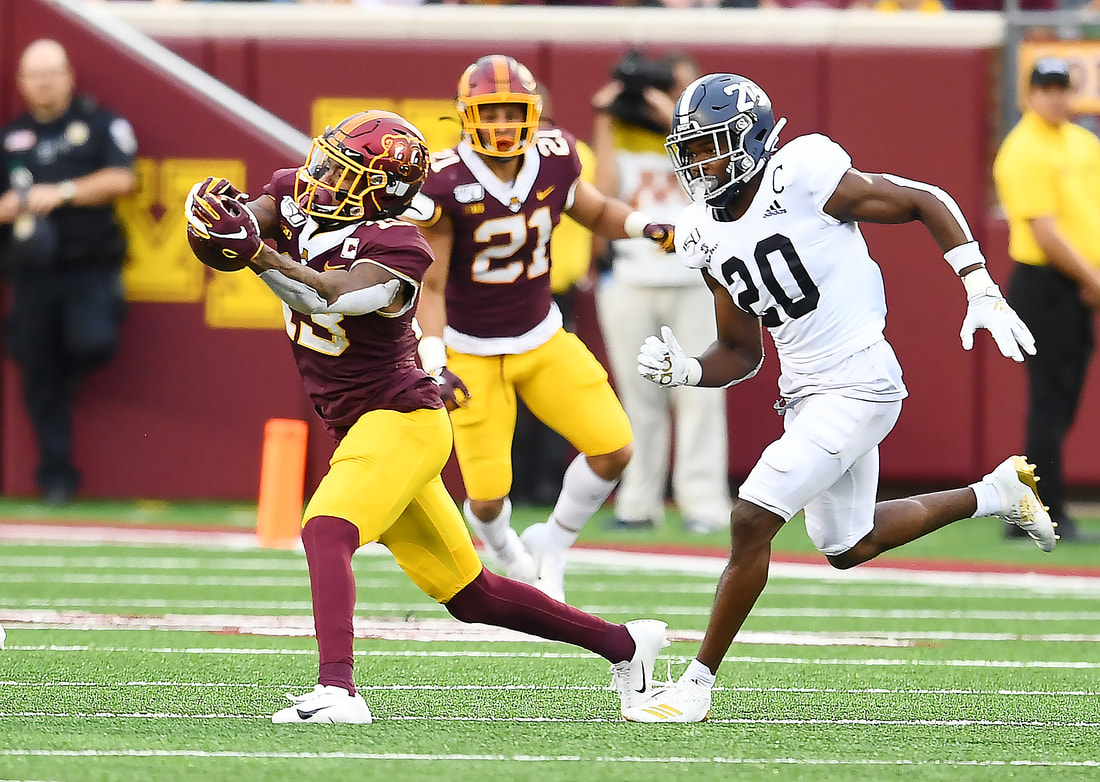 Rashod Bateman destroyed pretty much every cornerback he faced in 2019 and will have the eye of pretty much every NFL scout in 2020 as they hope he can repeat his production. At 6'2" and 210 lbs., Rashod Bateman boasts a very solid and athletic frame that scouts like in a receiver prospect. He possesses the best hands in the entire draft and it's not debatable. His focus, big hands, and long arms allow him to catch pretty much any ball thrown in his direction and at times he only needs one hand to do the job. He does an excellent job on deep routes of tracking the football and getting underneath the pass. He's a very good jump ball receiver with excellent leaping ability and a competition that allows him to come down with the pass on contested throws. His strong hands allow him to maintain balls throughout the catch process on big hits and he is a great player to have on the sidelines when in need of making a boundary play. He's an adequate route-runner with a good sized route-tree and good enough agility to make quick breaks and cuts on his routes. He's got great speed at his size to go deep and get behind safeties although that's not his specialty. Does a good job in getting through press coverage and working his way back into his routes. He's a very good run after catch receiver who got some wiggle in his feet to make defenders miss and his long arms allow him to stiff arm players off and away from him. He's a consistent player who comes to each game well prepared and ready to go and doesn't shy away from tough competition. He was the best player on the Golden Gophers offense and doubled on many occasions in 2019 which goes to show how good he was as a player.

Not as athletic as you would like a player of his caliber to be and it showed up when put up against a superior athlete. He has trouble separating from corners when his slant-n-go route doesn't fool corners and when he catches a pass downfield, it's almost always a contested one. The only time he really has space from defenders is when coverage's break down allowing him to sneak by and make a play. He has a good but not great get off the line and usually has to work early to get separation. When he catches the ball and takes off with clear skies in front of him he can sometimes get caught by the faster players on defense which gives me the impression that his straight-line speed isn't enough to make him  a consistent threat after the catch.

​Rashod Bateman is likely a possession  receiver in his career but I do believe he has the ability to be a teams #1 guy. His competitive fire and elite level hands make him a great target for an accurate quarterback and I can definitely see him finding early success in a good offense.