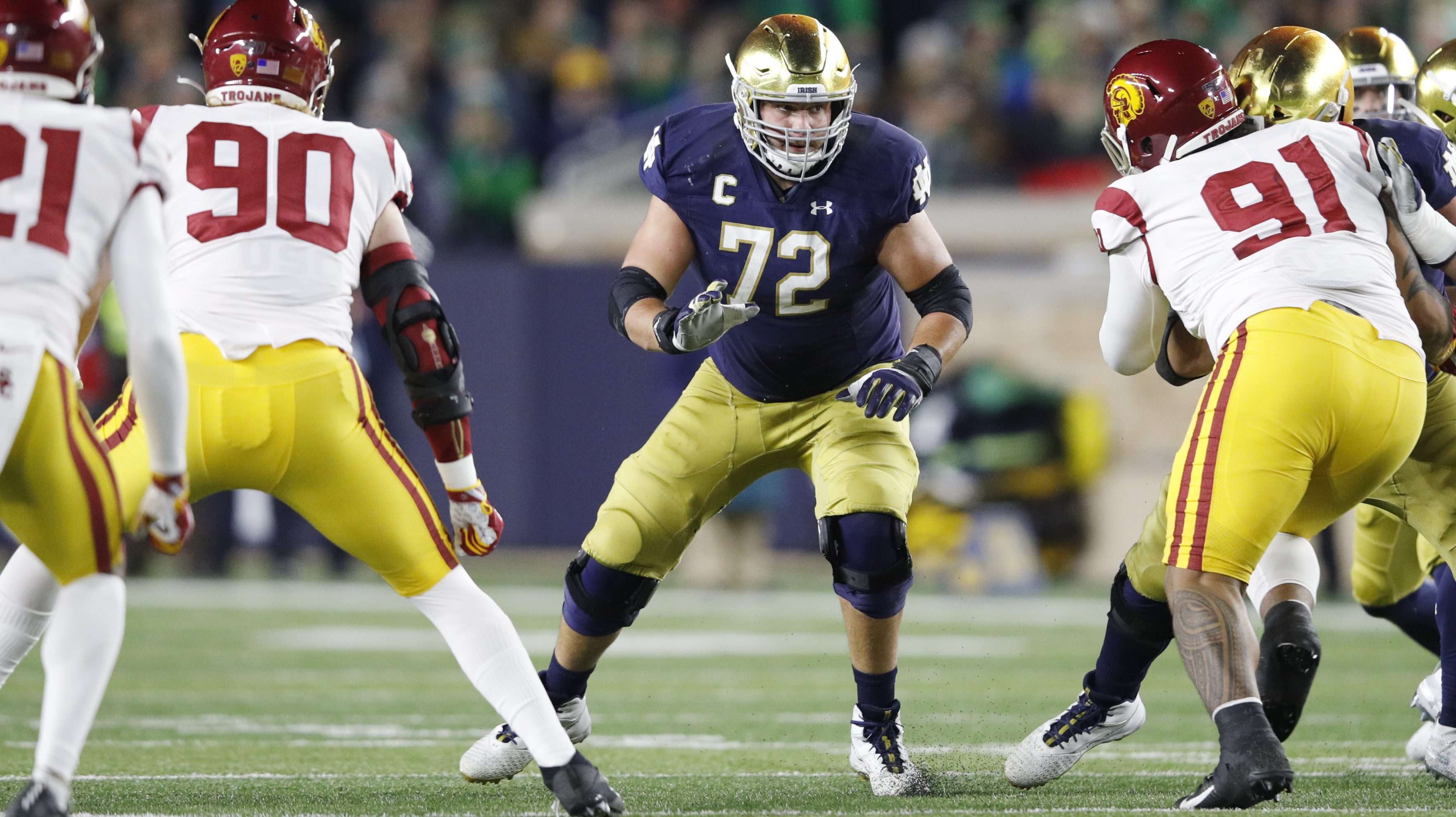 Notre Dame has a long history of putting quality lineman into the NFL and Robert Hainsey has a chance to be the next one off the line. He brings good size to the tackle position at 6'5" and 305 lbs. with great length and good athleticism. He possesses above average length in his arms and rarely finds himself getting outreached at the point of attack. Like all Notre Dame lineman, he's a very technical tackle that has plenty of reps under his belt. He knows how to counter initial rush moves and force his opponents into plans quickly. He's athletic enough to move with speed rushers and force them to work around his frame. He has good pad level when combatting bull rushes and does a nice job of redirecting his bull rusher. He has a quick and effective punch and has enough juice to stun lineman off the line. He has a great feel for defensive adjustments and is quick to recognize and react to stunts and twists in his direction. He does a nice job of keeping his inside clean when engaging rushers and rarely allows defenders to slip by him. He has strong hands and he's very aware of releasing his grip when he senses a potential hold. He has good speed when attacking the second level of a defense and takes great angles to pick up linebackers. He has battled against the most talented college football players in the country and held his own. He brings great effort on every play and doesn't stop blocking until the play is over.

His lack of power in the lower half is evident when asked to drive lineman off the ball. He struggles to create holes for rush by himself and his powerful interior lineman were constantly needed to help double team lineman. He's top heavy with his power and if he loses the leverage battle, he can often find himself getting walked back. He has good speed in short area spurts but he can struggle on pull plays to reach blocks and open lanes. His ability to take great angles makes up for his lack of agility because when he has to double back and secure blocks, he shows significant issues. Doesn't generate much explosion off the line and isn't known for bringing the pain at the point of attack. He hasn't played enough reps outside of offensive tackle to warrant any versatility to his game and doesn't have the athleticism to feel comfortable playing blindside tackle.

He's a quality depth player in his rookie year but his technical prowess and effort will likely get his a chance to start after. Notre Dame has put a lot of talent into the NFL and rarely are they misses and while he's not the best to come from the program, he certainly has a higher chance than most prospects in this draft to carve out a role in the pros. He has a good enough floor as a prospect to make an early Day 3 selection.
​