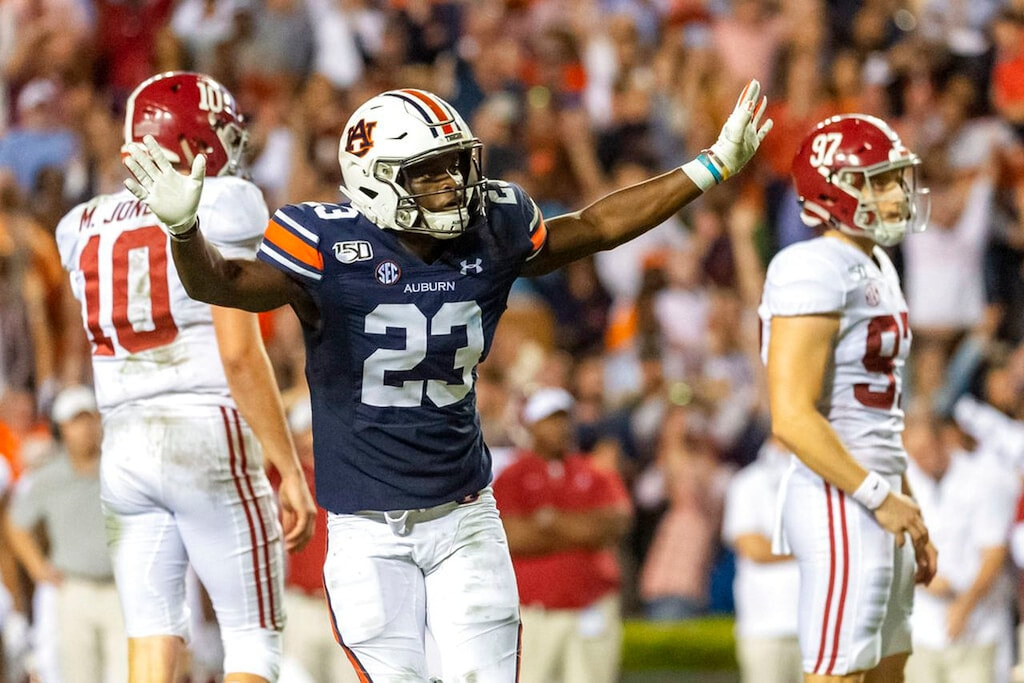 Photo by Vasha Hunt-Associated Press
Roger McCreary has been one of the fastest rising prospects in the NFL draft after a stellar 2021 season. At 6' and 190 lbs. McCreary brings great size and athleticism to the cornerback position. He possesses good arm length and prototypical size for an outside defensive back. In man coverage, he displays fluid footwork in his and good explosiveness when having to redirect. He plays low in his back pedal and has good hip flexibility to quickly turn upfield and run. He has good straight line speed and can hit top gear quickly if he has to make-up ground. He possesses sufficient quickness to change direction on shallow slants and make plays and has great make-up speed if he bites on sluggo routes. He has great route recognition early in a plays development and plays patiently when lined up deep to prevent him from jumping on routes too soon. He has very good length in his arms which helps him keep passing windows small, forcing quarterbacks to target elsewhere. In press coverage, he shows good aggression and tenacity at the snap when jamming the receiver and ensures to ride them out early if he can. He forces them to fight through him to get on their routes and can force delayed reads for quarterbacks. He does a good job letting up past five yards to avoid penalties. In zone coverage, he displays excellent quickness, agility, and explosiveness in his lower body to be a good zone cover corner in the NFL and his length in his arms helps him force quarterbacks to arc throws over him. He has excellent ball skills on the outside and quarterbacks should be weary of throwing bad passes in his direction. He has good hands for a cornerback and does a good job of high-pointing the football in the air. He's very aggressive on contested catches and will fight and claw to dislodge the football. He's a very aggressive and willing tackler in run support and doesn't shy away from contact. He's a fearless corner in coverage who doesn't shy away from competition, just ask Treylon Burks in 2021 when lined up against McCreary. McCreay plays in the SEC which features some of the best college football talent in the NFL and

Roger McCreary is a raw prospect at corner and will need heavy coaching early in his career to reach his potential. In man coverage, he can be late turning up field on deep routes which can cause him to get burned deep. He's a bad tackler as a cornerback as he doesn't try to wrap up ball carriers but rather will lower his shoulder without bringing his arms forward. He doesn't try to strip the football when making tackles which is a must in today's NFL and too often takes bad angles when chasing ball carriers. He can miss his jumps on the football occasionally and miss opportunities to make a play. In zone coverage, he appears a little lost in space and can be late when diagnosing routes and covering his zone. He can get bullied in press coverage when opposing receivers are bigger than him adding more muscle to his frame could serve him well. He plays inconsistently with some of his games showing a potential lockdown corner and others where he looks lost and confused. He doesn't have snaps at safety or corner which pigeon-holes him as an outside corner exclusively and kills his potential versatility to play slot corner or safety.

Roger McCreary is raw but has great potential to be starting outside cornerback in the NFL with his size, athleticism, and competitive fire but he needs tempering and polishing to truly shine in the NFL. He has that "it" factor as a cornerback prospect with his high effort play on the field and if gets put in the right situation and with the right coach, he could be a steal in the draft.