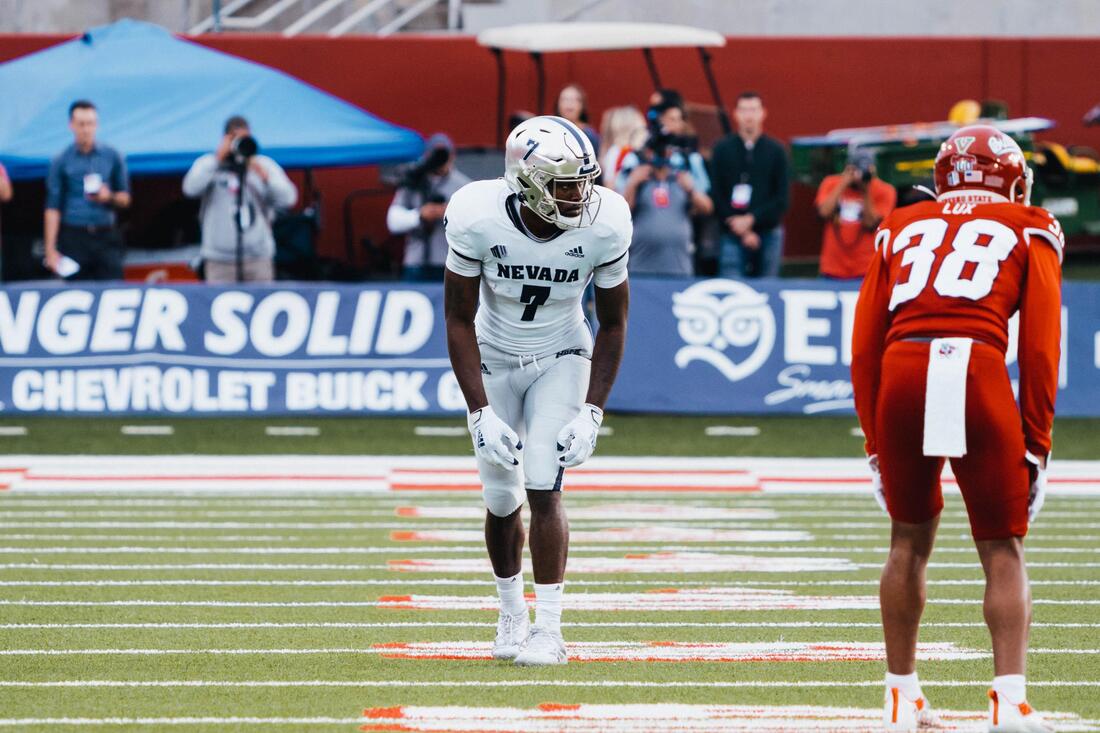 Photo by Farrell Shine-nevadawolfpack.com
Nevada was probably the most underrated team in college football this year as they had a quarterback receiver combination in Carson Strong and Romeo Doubs that many defenses had a difficult time combating and while Carson Strong has earned dark horse first round conversations around the league, Romeo Doubs certainly deserves his own praise. At 6'2" and 200 lbs., Doubs brings great size, length, and speed to the receiver position. Romeo was easily one of the best deep threats in college football and certainly in the Mountain West conference where he made it a routine weekly to burn corners deep with his ability to hit an extra gear and float under deep balls. He exceptional straight line speed and when he gets behind his defender it's usually too late for them to adjust and catch up. He gets impressive separation on deep routes as he does a nice sluggo route and when paired with a big armed quarterback like Carson Strong, things can turn deadly for an opposing defense quickly. He's impressive when he has the football in his hands because he's more elusive than you would think for guy with his straight line speed and has made defenders look foolish in the open field. His production is consistent on the stat sheet with few outlier games of immense yardage and some with very few. He can play both on the outside and in the slot giving him good versatility for an offense. He's been very good at the catch point with his scrappy style of fighting for the football and securing the catch through contact. He's been very good on short passes about picking yards after wards and if he sees green grass in left front him by the defense he can be a difficult man to catch and bring down. He has a good set of evasive maneuvers for a receiver and surprising power in his legs to at times break would be tacklers. He was a very good return man in college and does offer value to a special teams unit in the NFL. He's competitive and he is very willing to cross the middle and catches in dangerous waters which gives him great toughness in this regard. Has had two straight 1000 yard receiving seasons and had 11 touchdowns in 2021showing that his production in college football was no fluke.

The Mountain West isn't college football's toughest conference and Romeo Doubs did take advantage of corners in college football that are likely to be competing for a practice squad position when their college careers are over and his lack of competition against Power 5 defensive backs will cause him to drop in the draft. Average quickness and agility in his lower half and struggled to make cuts in his routes, especially in the shallow level of the field. His release against press coverage can be a difficult task with his lacking mass at 200 lbs. and adding some muscle to his frame could improve this issue in the NFL. He's got the tendency to catch with his body which has led to some drops in his college career. Doubs has issues with route-running as a whole as he often doesn't fool his man nor does he get great separation at the top of his routes. He's more of a burner than a turner on the field with most of his big plays coming on deep passes. Carson Strong was a great quarterback in college and his draft status as a potential Day 1 pick certainly shows that Carson Strong definitely helped Doubs out in terms of getting him catchable balls.

Romeo Doubs has been in the top 100 of every big board I have seen which goes to show just how much confidence scouts and teams have in him as a viable deep threat option in the NFL. He needs to become a much more nuanced route-runner and probably should put on some muscle mass to better handle aggressive corners in the NFL. His straight-line speed and return ability are likely to translate at the next level and if grinds for his team in practice I could see him being a quality #2/#3 receiver and core special teams player in the NFL.