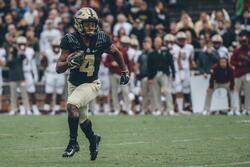 Rondale Moore is easily the best speedster receiver in the entire draft and every time you watch his highlights you can see a receiver with Tyreek Hill potential. He's built like a speedster at 5'9" and 180 lbs. with more than enough muscle on that small and compact frame of his to withstand punishment. He's got lots of speed to burn in his legs and is usually having to slow down rather than speed up to catch a deep ball. He's an excellent route-runner with his elite level speed and agility and has a vast route tree to match. His best attribute by far though is his run after catch ability which has made him the most dangerous receiver in college football. He's as explosive a player as you'll find at the receiver position as he can go 0-60 in the blink of an eye. He's got such a muscular frame and built so low to the ground that even elite defenders can't get a good shot on him to bring him down. His elite level leg strength for his size allows him to shed arm tackles with ease and actually have defenders bounce off of his legs. He's got some of the best jukes and spin moves I have ever seen a receiver have and he makes even elite tacklers look foolish in the open field. He's not afraid to take a hit and has on more than one occasion lowered his pads to plow defenders. He possesses excellent hands and holds onto the ball through contact, even over the middle where he may take a big hit from defenders. He's by far and away the best player on the Purdue roster and even the elite college football programs, such as Ohio State whom he played against, have been unable to stop him when he gets going. He's such a danger after the catch that Purdue regularly throws him screen passes because he's likely to take it to the house, even with defenders in front of him. Not afraid to contribute on sweep plays and take hand-offs because of his ability score at any given chance. Doesn't look for contact after the catch which is amazing and when he's near the sideline he will opt to run out and save his body. Like all speedsters his size he suffers from his limited height which rears its ugly head when he has to come down with a contested ball.

His catch radius is very small for a receiver and will need an accurate quarterback to get him the ball. He suffered some injuries in 2019 and missed his last 8 games of the season and given his lack of size and consistent beatings he took in his freshman year, it will give teams pause about whether he can handle the rigors of the NFL.

He's as good a deep threat as you'll find the draft and will absolutely dominate in the NFL if paired with a decent quarterback. His speed and run after catch ability make him the most dangerous receiver in the draft and I wouldn't be shocked if he ends up becoming another Tyreek Hill. If he can maintain his health and be put in the right scheme, he could be a perennial pro bowler in his career.