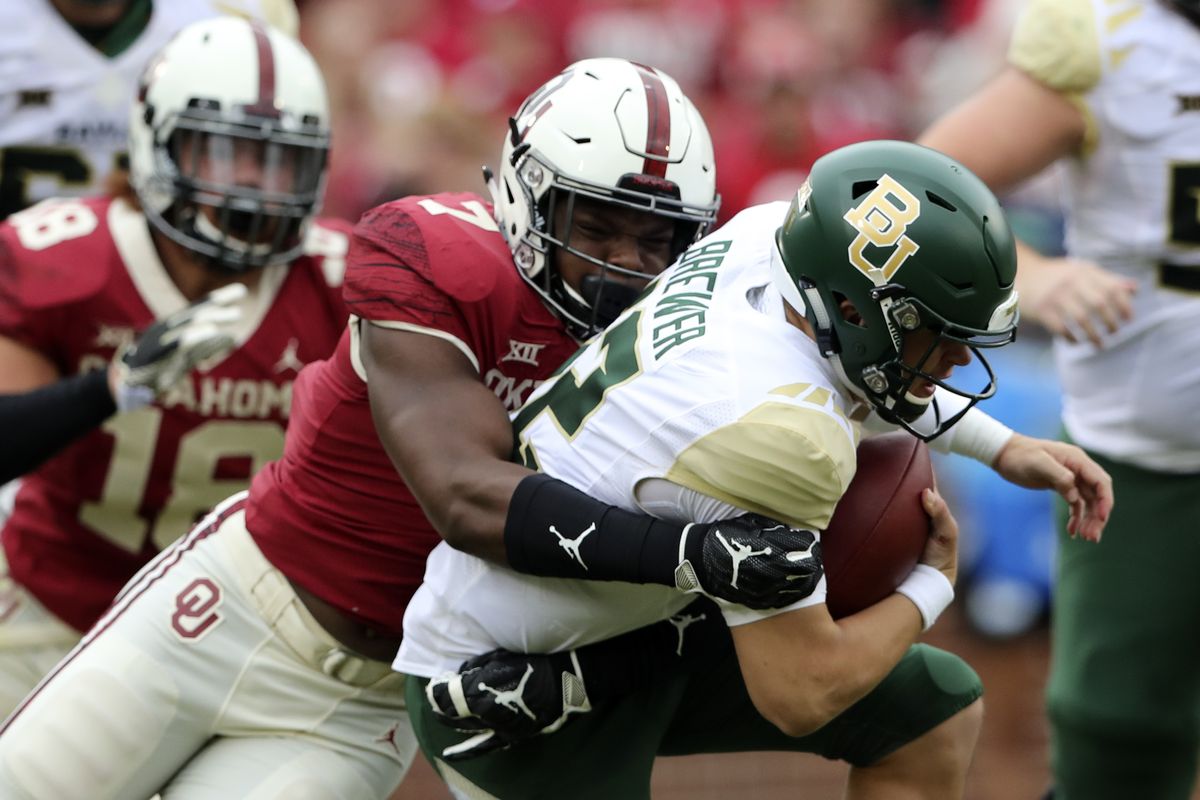 Ronnie Perkins was easily Oklahoma's best defensive player in 2020 and has seen a major rise in his draft stock since his stellar pro day. At 6'3" and 250 lbs., Ronnie Perkins boasts great athletic ability and flexibility. He's built to rush the passer off the edge which was exactly what he did for the Sooners. He has the first step quickness to beat offensive tackles early on the snap. He has the speed to quickly bend the edge and make plays in the backfield. He has good length in his arms to keep offensive tackles out of his chest and has very fast hands to swipe away tackles from getting into his chest. He displays good pass rush technique with an excellent stutter-step move and swim move that's going to be difficult to counter in the pros. He has above average power in his upper body and can hold his own in run support. He has a good punch and strong hands to stack and shed blockers in run defense and has more than enough agility to change direction quickly if the ball carrier changes direction. He's got enough speed to chase down running backs that are running in the opposite direction and quarterbacks that break the pocket. He's a great gap shooter on twists and stunts and is reliable as a second effort player. He's very patient when playing the edge in run defense and doesn't rush in on read option or play action plays. He plays with a great motor and always gives his all in a game. He has experience playing with his hand in the dirt and from the stand-up linebacker position. He lived in the backfield in 2020 and really elevated his ability to squeeze through cracks in an offensive line to penetrate the backfield.

Ronnie Perkins doesn't have much of a counter rush game to speak of yet and it can turn ugly fast when his initial move fails. He doesn't go after the football enough when attacking the quarterback and I don't see him try to strip footballs from running backs enough either. He could use more rush moves in his repertoire as his swim and stutter-step move can be neutralized by more athletic tackles. He has the length and power to bull rush opponents but he doesn't utilize it enough and should be more consistent when applying power to his game. His timing of offensive snaps is inconsistent but that should be improved with more reps and studying tape.

Ronnie Perkins has the potential to be a good pass rusher in the NFL but it could be awhile until he realizes his potential. Until he can utilize a counter rush game and learn to make turnovers. I think he can play in both 4-3 and 3-4 for in the NFL with his athleticism and instincts and if he can hone his technique some more, he will be a quality starter in the NFL.