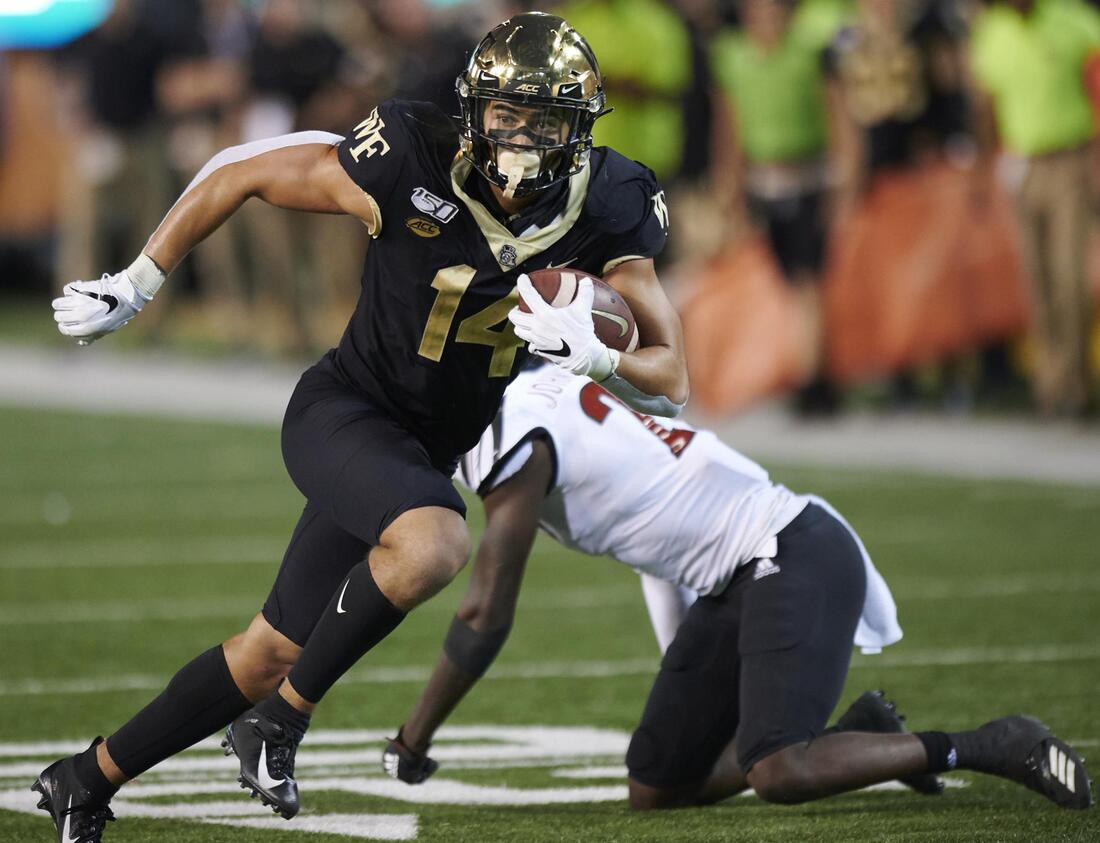 Sage Surratt, brother of Chazz Surratt, really burst onto the scene last year and has garnered quite the hype train as of late. He's a big and athletic target at 6'2" and 215 lbs. with a lot of muscle and a lot of speed. He possesses tremendous change of direction for his size and it really shows up in his route-running. He's smooth and slick when running his routes with excellent change of direction on his routes and good burst. When asked to run deep he can turn on the boosters and get behind defenses quickly. He has very good hands and does a good job of going after the football. His broad frame as a wide receiver serves him very well when fighting for contested catches and he usually finds a way to muscle them in. He does have a good repertoire of routes and knows how to run them well. He's wicked smart as his background will tell you with him being accepted to Harvard out of high-school but chose to go to Wake Forest in order to pursue his dream of playing pro sports. He's got some ability after the catch and can be dangerous if given open field to run. He fights for extra yards and doesn't go down easy. He tracks the ball very well and is quick to reach out and reel in passes. He does an excellent job of quickly disengaging from press coverage and getting open quickly. He's quick to hit top speed and does a great job of creating separation with his strength.

He has a lot of evasive maneuvers even though he clearly shows that he can be a dangerous player with the ball in his hands. Injured his shoulder last season and missed the last 4 games giving teams a reason to be concerned about injuries. He struggled mightily against top competition in college and had a tough time getting open. He's not very agile or fluid outside of running his routes. He relies too much on his physical makeup and strength to get open and it could get offensive foul calls. He lacks suddenness when entering some of his routes and he doesn't have the twitch to laterally explode.

​Sage Surratt was a terror in the ACC last year and really gave top college defenses worries. If he hadn't hurt his shoulder last year, he probably would have flown up draft boards and likely would be hearing his name as a possible fringe Day 1. His got loads of potential on the right and with the right quarterback but the planets have to align for that to happen.