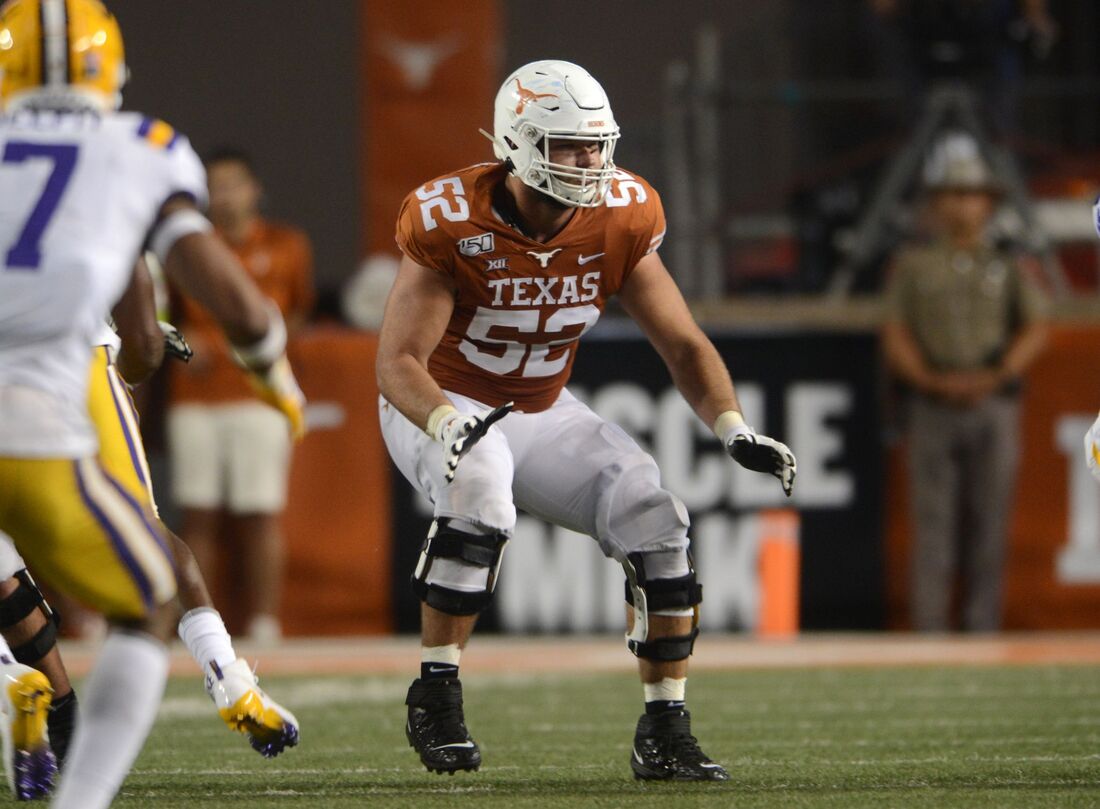 Samuel Cosmi is one of the biggest boom or bust in the 2021 NFL draft but after his good season in 2020, he could be a very early draft pick in next year's draft. He has exceptional length at 6'7" and 300 lbs. with long arms, big hands and very fluid short area quickness. He has a natural feel for pass protection and has been a key piece of the Texas Longhorn offense for two seasons now. He's a menace in pass protection if he smells blood in the water and isn't afraid to pummel pass rushers into the turf early. He's one the best in the draft when blocking at an angle as his exceptional length and excellent athleticism allow him to still be effective at riding pass rushers out of the pocket or collapsing them inside even when he's lost the battle early. He has enough athletic ability in his feet to mirror any defender in college and in the pros. He's got a very powerful punch that he uses with tremendous accuracy. He's a hard man to break off when he gets his hands into your chest and will look to bully them into the ground if he gets his shot. He's a very nasty offensive tackle when hand fighting and utilizes a powerful and painful chop on defenders arms when they try to get into his chest. His long limbs allow him to keep defenders out of his chest and establish better leverage against a bull rush. In the run game, he can be a hard man to stop when he has his opponent squared up on him. His exceptional athletic ability is really on display when he beats his man and enters the second level of a defense where his speed and agility for a man his size allow him to make quick use of defenders. He's one of the best offensive lineman in this draft to lead a convoy on a game breaking running play and will make sure the running back has more than enough room to break away from defenders. He offered his quarterback Sam Elhinger more time in the pocket than he probably deserved given how erratic he is whenever he even hears pressure and did a great job of keeping his opponent out of the pocket when Sam would take off.

​He can struggle at times against the exceptionally explosive athletes like last year's K'Lavon Chaisson and will need to find a way to effectively neutralize athleticism that matches his own. He has survived way too much on his athletic ability and will struggle mightily in the NFL if he can't develop his technique more. He's very bad about keeping his balance as an offensive lineman and has on occasion found himself on the ground if he got caught by a pass rusher. Much leaner than an offensive lineman his size should be and will need to bulk more muscle mass in his frame to find success in the NFL. He has the ability to mirror his guy but has struggled against the quick and flexible pass rushers that can get by him by dipping and bending the edge on him. He plays too tall at times and can go for a ride backwards if he allows a defender to latch onto his pads. He has a hard time reacting to blitzes and stunts on him given his lack of experience at the position. Samuel Cosmi is either dominating his guy or getting dominated which shows a lack of consistency and technique to his game but you can't find many players with his level of athletic ability.

Cosmi is a project but he's a project that could pay off big if given a little time to develop. His ceiling is enormous as a prospect and I believe if put with the right coaching staff and scheme that he could flourish and turn into the steal of the draft. His competitive nature and athleticism are traits that you can't teach in a lineman and at least one coaching staff is going to fall in love with his potential.