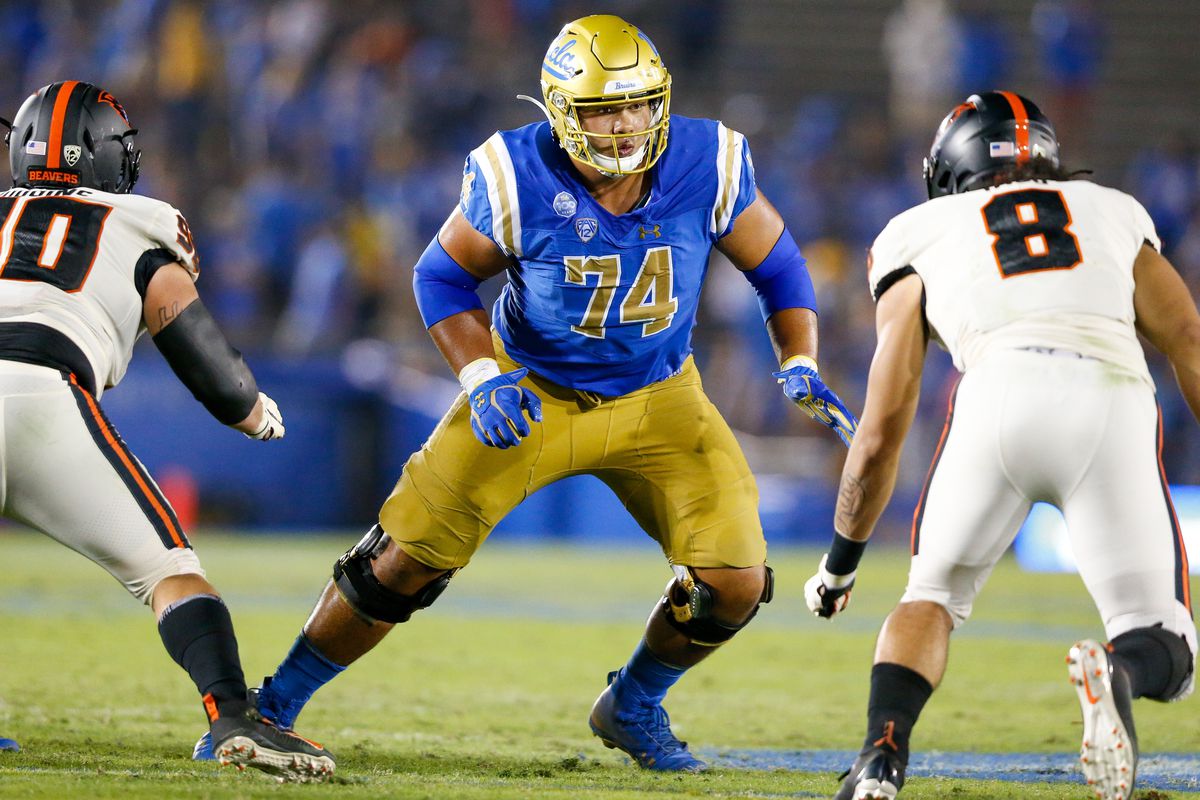 Photo by Jordon Kelly-Icon Sportswire via Getty Images
UCLA had its first positive season under head coach Chip Kelly and a lot of that success came from the ability of left tackle Sean Rhyan. At 6'5'' and 320 lbs., Sean Rhyan possesses phenomenal athleticism, exceptional football IQ, and fearsome nastiness. UCLA employs a one-of-a-kind offense that has a great deal of moving pieces like trick plays, lots of read option passes, constant screens, misdirection, and of course his famous quarterback runs, and the athleticism needed by offensive lineman to not only run these plays but to make them work effectively is extraordinary and Rhyan thrived in the offense, something highly unprecedented for many offensive line prospects. In pass protection, Sean Rhyan plays with excellent explosiveness, agility, and speed which you could see when he plays left tackle against a team's best edge rusher. He has enough athleticism and quickness to mirror edge rushers off the edge and if he gets put inside, he'll be able to handle even the more athletic defensive lineman in the NFL. He has a very powerful punch when he lands it and has exceptional grip strength to lock in his defenders and ending plays. He has exceptional power in his frame and whether it's tossing edge rushers out of the play or absorbing bullrushes, it's rare to see him get overpowered. He has a tremendous anchor with tree trunk legs and when he gets rooted in the ground, he ain't moving. He has good hand fighting skills and does a nice job of keeping his chest clean from defenders. He can be a nasty lineman to make a mistake against as he will drive into the dirt and make you pay. He had a great game against Kayvon Thibodeaux when they faced each other, so well that Oregon forced Thibodeaux to the other side of the line because he couldn't beat Rhyan on the outside. His potential in the run game is what makes many analysts, including myself, picture him as more of a guard because he's perfectly built for the position. He plays with great pad level for a 6'5" offensive lineman and when get under a defenders pads, they go for a ride. He comes with excellent power and momentum out of his stance in the run game and he can upend defensive lineman that play higher than him. When he locks his hands into chest pads in the run game, he will drive guys completely out of the play when he gets going and can be a menace to get away from. He's very good at turning defensive lineman and edge rushers out of the rush lane and was usually the preferred lineman to run beyond for Zach Charbonnet.  You can tell just by watching film that Rhyan is looking to hit people in the open field and linebackers and safeties seem to actively avoid him when he breaks into the second level. He's excellent when pulling due to his aggressiveness and athleticism and can clear rush lanes with ease. He's a highly competitive, highly intelligent prospect who will pick up the nuances of playing guard quickly in the NFL whose high motor and high effort should serve him very well in the NFL.

His aggression gets the best of him far too often when engaging defenders in the second level and he has a history of missing blocks because of it. He can take poor blocking angles in the second level due to his aforementioned over aggressiveness and give defenders opportunities to make plays behind. His power in his punch can be mitigated by his accuracy and timing at times, allowing defenders to either evade it or recover quickly from. His lack of arm length is likely to force many teams to look at him as a guard prospect and while he has the capability to learn a new position, it could mean a set back in his development as a prospect. Too often can grab outside the numbers, often shoulders, in pass protection and while he didn't find getting many holding calls, it's a bad habit that he'll need to break in the NFL. His footwork in pass protection can improve as he often doesn't chop his feet enough, allowing his opponent opportunities to cut back and take his inside gap. The offense Chip Kelly ran is so different from others in college football and the NFL that it could take some time for Rhyan to fully adjust to the pro style offense, however his high football IQ and overall IQ considering the mental pedigree needed to attend UCLA likely means he can pick it up quickly.

I like Sean Rhyan more than other analysts in this draft because while he will get dinged for his length and his likely position change in the NFL, his high football IQ, athleticism, and nastiness all translate very well into the NFL and if put on the line early for team to polish his game, he could prove to be a great rookie and even better veteran down the line. He has a very high ceiling for an offensive guard in the NFL and if coached up right and given time to develop, he could find himself playing in a pro bowl in his career. ​