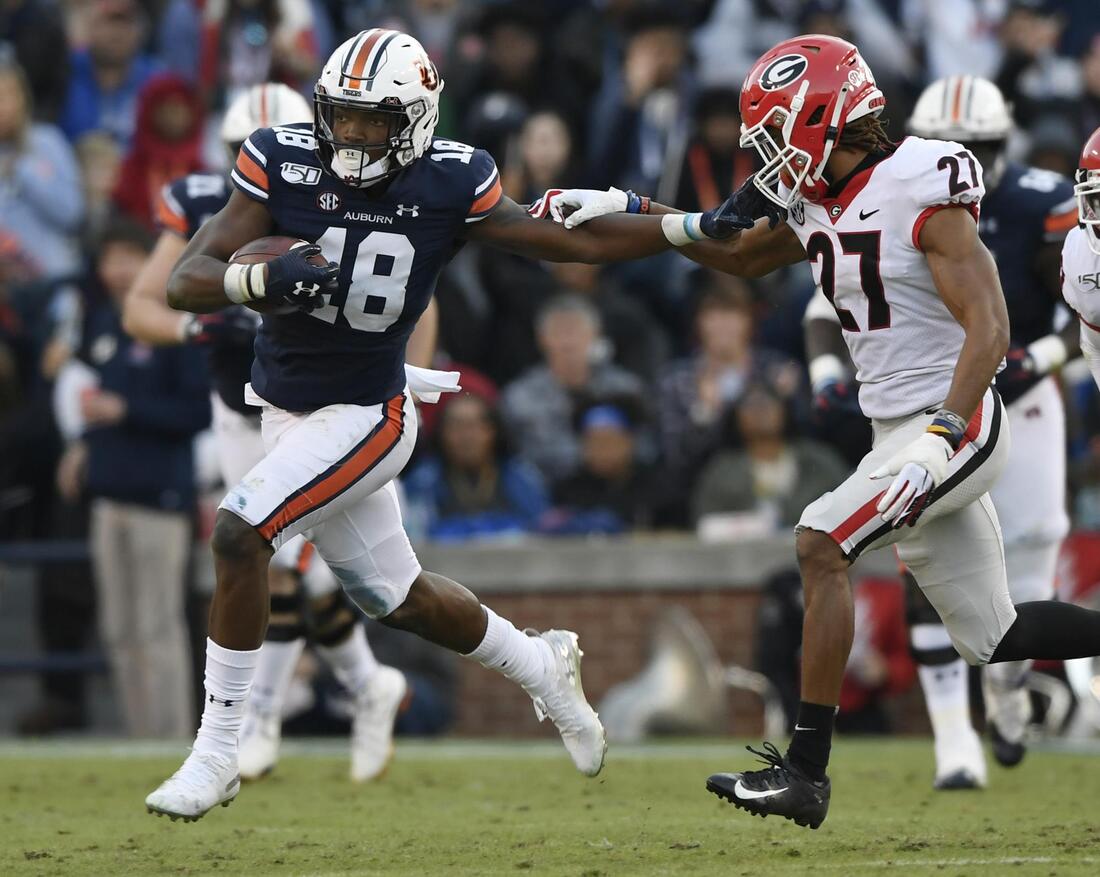 Auburn Tigers quarterback Bo Nix played his heart out in 2019 but he wouldn't have been nearly as effective if Seth Williams didn't bully cornerbacks off the line and make difficult catches on a consistent basis. He's a very thick and muscular receiver at 6'2'' and 225 lbs. with impressive power and excellent hands. He's an intimidating presence to be across from as a cornerback and is going to be a tough play to press coverage in the NFL. He's an excellent red zone player with his ability to push off defenders at the line, find a zone to run into, and come down with the jump ball. He's a beast on slant routes and fades and is going to be a difficult player to cover on these routes. He's got very good athletic ability with an excellent combination of speed and quickness for his size. He has a very large wingspan, even for his size, and it is extremely difficult for cornerbacks to reach into his hands and knock passes away. He's got incredibly strong hands and does an excellent job of holding onto the football through contact. He's as mean and aggressive as a bull attacking a matador and has no issues about getting extra physical with corners. He's a good option on seam routes where his speed and size can overwhelm cornerbacks. Always wins the contested catches and is going to be a huge factor on 3rd down plays. He's about as clutch a college receiver as you'll find in this draft and should be a teams 1st or second option when in need of a score or 1st down. He commands at least two players to bring him down after the catch and will thrash and claw for extra yards. He's got a very good sense for the sideline and has plenty of toe-tap catches near the boundary line.

Not the best route-runner and mainly relies on his size and athleticism to make plays and that will only get a player so far in the NFL. He's not agile enough to get separation from cornerbacks and almost every ball thrown his way is a contested catch. Not much yardage after the catch surprisingly given his size and athleticism and I would like to see him break more plays.  He's very stiff running his routes and he doesn't possess many routes in his tree. He can get aggressive after the play and can let his temper get the best of him, causing the yellow flags to fly out.

Seth Williams reminds me of Dez Bryant in so many ways with his physicality, his size, his athletic ability, his competitive fire, and aggression but all those attributes can only help you so far in the NFL. He needs to be put on a team with an accurate gunslinger of a quarterback if he wants to find success in the NFL because the days of getting the big and strong receiver that can catch jump balls and fade routes are dimming away. He also might want to learn some evasive maneuvers in the open field in order to truly maximize his gifts.