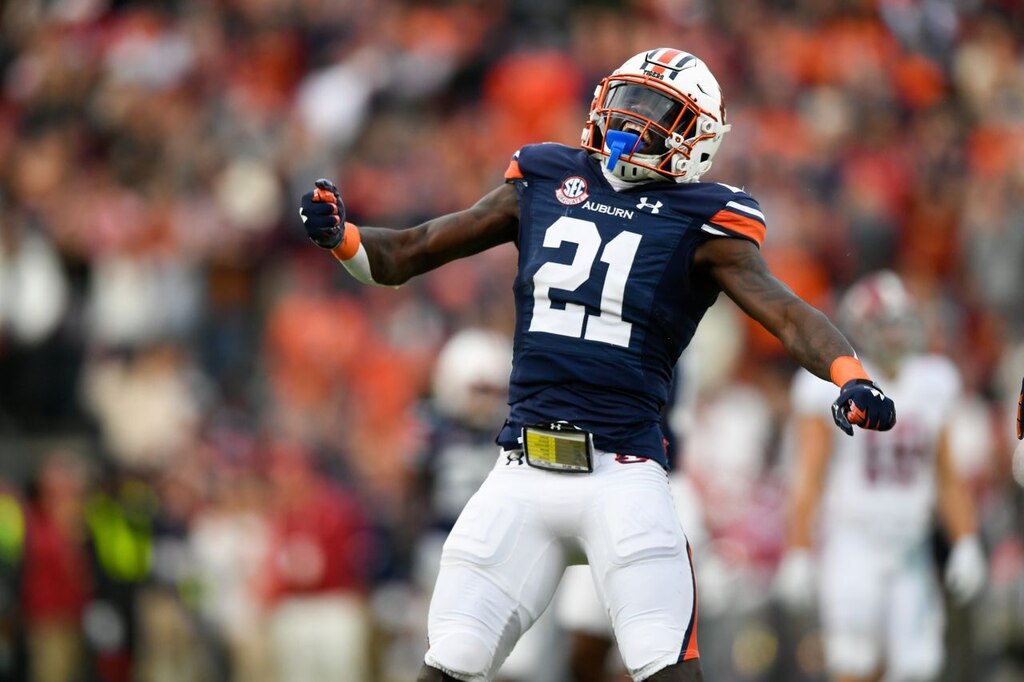 Photo by Todd Van Ernst-Associated Press
The Auburn Tiger secondary features some talented prospects in this years and next year's draft but none are more feared than Quindarious "Smoke" Monday. Smoke Monday brings rare size to the safety position at 6'3'' and 210 with elite length and explosiveness. He has good speed for his size and can reach top speed very quickly. In zone coverage, he does a nice job of using his length to his advantage by forcing quarterbacks to try and throw over his huge frame which can lead to bad passes as well as allowing him to effectively match up with tight ends if they find the open hole on defense. He does a nice job of jumping routes in zone and sticking his hand into the catch point causing incomplete passes and will hit stick receivers in his zone if he has a shot. In man coverage, he does a great job of matching up on tight ends in the slot or at the line and has the athleticism to stay on them all over the field. He plays very well against bigger receivers like tight ends and taller receivers in man coverage as he's not phased by their size or athleticism due to his own exceptional traits. He's the biggest hitter in the draft and it's not very close with every tackle and hit of his looking like a plane crash. He absolutely rocks ball carriers backwards when they make contact and it does make offensive players very wary of his presence on the field. He has caused receivers to drop passes when crossing over the middle as they see him coming in hot and that fear of getting obliterated helps his teammates make plays. He's as sure-handed a tackler as you'll find in the draft as he possesses good strength in his frame and long arms that can envelope ball carriers. He's a heads-up tackler and does a great job of wrapping up and bringing down ball carriers quickly. He's fearless as a tackler with his willingness to head on tackle ball carriers bigger than him like tight ends or full backs. He's a phenomenal blitzer for a safety as he showcases enough athleticism and fluidity to weave through lineman to make a play in the backfield, but also because when he gets back there he doesn't miss tackles. He has snaps blitzing up the middle as well as off the edge and has made plays at both. He has good ball skills for safety and this is where his exceptional length comes into play as he can fly high for the football. He also has excellent return skills as a safety with three touchdowns on defense. He has the ability to play both linebacker and strong safety in the NFL and his hit power as a safety could make him a tone setter on defense. He's an ultra tough player that plays with a sharp edge to him and he brings a non-stop motor as well.

Smoke Monday I would classify as your classic strong safety as he's much more adept at tackling ball carriers than covering and that was what Auburn used him for. He played a lot of snaps as sub package linebacker and often covered in the shallow zone area on passing downs which limits his versatility to play deep on the back end of the defense. He needs to work on his back pedal and as well as lowering his pads when man or zone coverage. In zone coverage, he has the tendency to get lost in space a bit which makes him slow to react to throws. He doesn't possess the great range that you look for in coverage safeties and he does have trouble diagnosing routes at the line. He doesn't try to strip the football enough when making tackles and also doesn't try to knock the football out of the ball carrier's hands with his shoulder. He doesn't match up well in man coverage against shiftier receivers and if you were to use him at a position outside of safety it would have to be a sub package linebacker. He takes too long of strides in coverage which kills his ability to turn and burst on the football and will need major refinement to his game in order to be a truly trusted asset on the back end in an NFL defense.

Smoke Monday is a different safety prospect in this draft as he's more hybrid linebacker than true safety but the NFL loves experimenting with defensive players and hybrid linebacker has been a position teams have been trying to get right since Kam Chancellor. Guys that can hit like Smoke Monday are still liked by NFL teams because they can not only cause turnovers occasionally but they bring a toughness and an intensity that makes a football thrive off of. If he can fix his coverage issues, polish up his technique, and broaden his overall game as a safety/linebacker, he could be a steal in the draft to the right team.