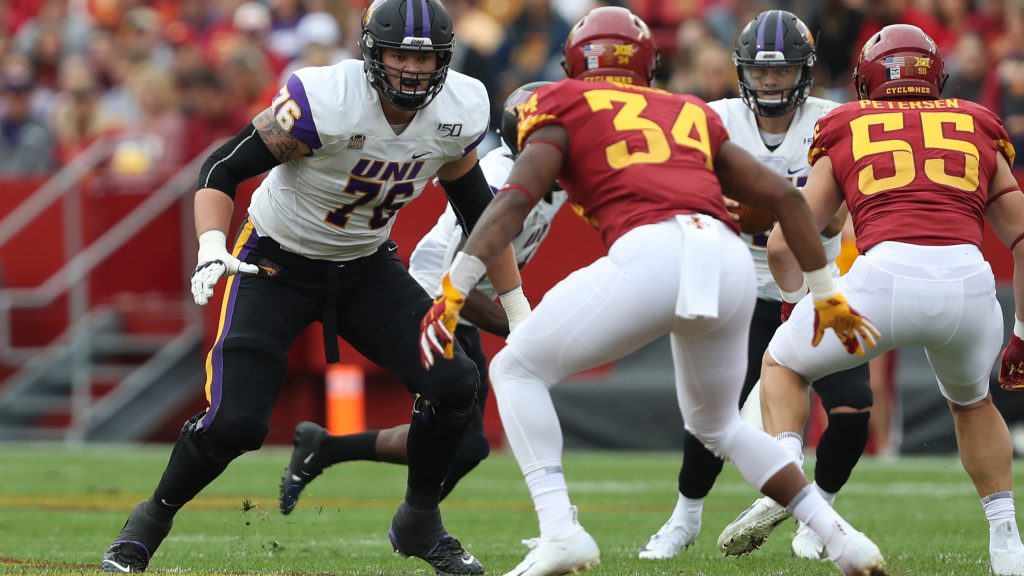 UNI Offensive Tackle Spencer Brown turned in an incredible 2019 for the Panthers and is going to turn a lot of heads at the UNI Pro Day. He's a monster at 6'9'' and 320 lbs. with exceptional athleticism and fearsome mean streak. As his size would suggest he possesses ridiculous length and knows how to use it. He possesses excellent upper body strength in his arms and chest and when he punches a defender, they usually hit the turf hard. He's very good at keeping his opponents hands out of chest by using both his sheer power and length and rarely loses his grip. He comes off the line with incredible explosion and power and it usually ends with him mauling his opponents. He's very good at upending defenders by coming off the line with great pad level and is very accurate when getting his hands under his opponents pads. He's a mauler and finisher in the run game and clearly enjoys running through defenders. In pass protection, he does a great job of kicking, sliding out of his stance and mirroring his opponent. He has quick and choppy feet that help keep his opponent in front of him and his length makes it very difficult for guys to get into him. He's a good hand fighter with a very strong grip that keeps his men close to him. He's very good at knocking his opponent off balance by using their momentum against them and rarely losing on bullrushes. He doesn't fall for chops or swipes and has too much power his upper for opponents to knock his hands away. He still has plenty of room to grow on his body and has become much more improved every year he's been in college.

He's built too top heavy at this point in his career and when he doesn't gain the leverage needed to engage his opponent, it ends ugly usually. He can get taken for a ride if a defensive lineman bull rushes him and gets into his pads and he lacks the lower body strength to recover quickly. He can be prone to holding his opponents too long and draw a flag occasionally. He played a majority of his games against low level competition where his athletic traits and immense size can make up for any mishaps he has and going from the low level college ranks to the pros will be a culture shock. I didn't see play left tackle at UNI which gives me some worries about his versatility at the next level. He has struggled at times dealing with shiftier edge rushers in college that can keep up with his athletic ability and will need time to adjust to the speed of the NFL.

Spencer Brown is a great offensive tackle prospect who has the potential to really develop into a force at the offensive tackle position but he's going to likely need significant time to adjust to the speed of the pros. If he can build some more strength in his lower half and grind in practice, I can certainly see him reaching his high ceiling.