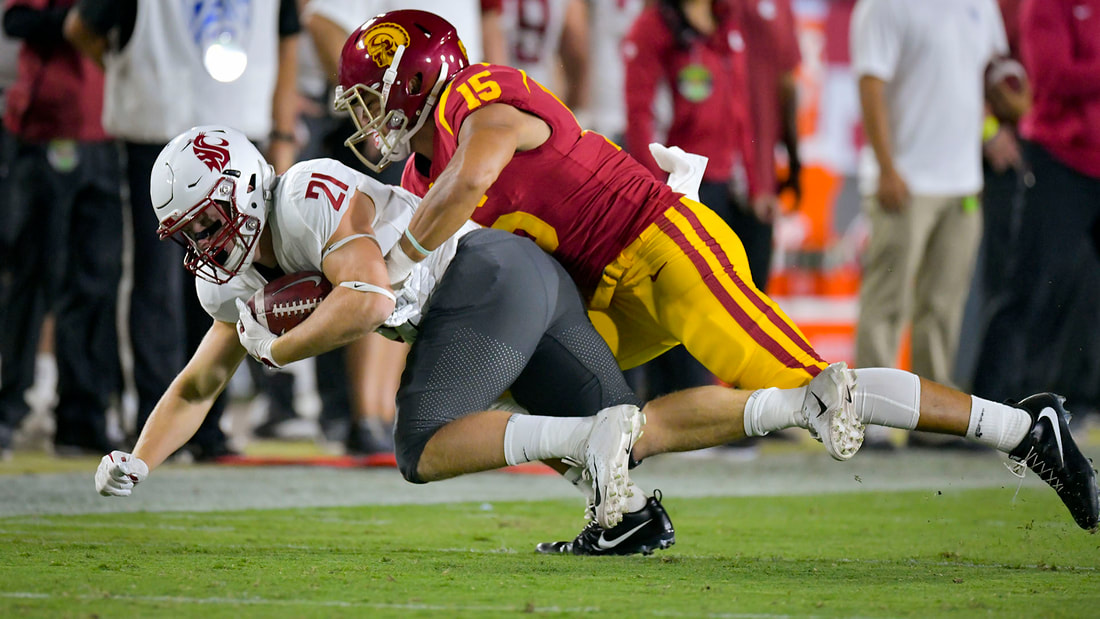 There was no better player for the last half of the 2020 season than Talanoa Hufanga who made the USC Trojans defense a force to reckon with. He possesses easily the best build for the position in the draft at 6'1" and 220 lbs. with impressive athletic ability and rare versatility. He's one of the most feared hitters in the draft, earning the nickname "The Trojan Missile" by his peers, and his style of play has created a lot of problems for PAC-12 offenses. He's the best tackling safety in the draft, rarely losing a ball carrier from his grip, and he always attacks them head on. He's easily the most versatile defender in the draft with USC playing at safety, linebacker, cornerback, and even as a pass rusher off the edge. His football IQ is off the charts as he's rarely out of position on defense. He doesn't fall for misdirection such as play action or fakes very often and when he sees his opening to make a play, he breaks on the ball like no other safety in the draft. His pursuit speed in run defense is unmatched by his peers and his explosion on the ball is rare. He's always looking to create turnovers on defense, often swiping at and trying to strip ball carriers when he has a shot. He loves to come down and play in the box in run support is the last guy you want to meet in a hole. He made incredible improvements in 2020 in coverage from his 2019 season, logging in 4 interceptions in only 6 games. He showed tremendous ball skills for the position making difficult interceptions look easy. He has great range for a safety of his size and has shown to have no issue playing the single-high safety role on defense. He has very good hips in coverage with good fluidity and explosion on the ball. He times his jumps very well on contested catches and does a good job of getting his hands on the ball. He showed much better skills in zone coverage in 2020 with most of his interceptions coming off of tipped passes in his direction. He takes good angles on the passes when jumping routes and isn't far from making plays when he does.

He has had a number of injuries occur in his college with broken collarbone in 2018, a dislocated shoulder in 2019, and got hurt in 2020 but didn't miss time which does bring up durability issues with Hufanga which becomes even more worrisome given his style of play. While he certainly has the athletic ability to play man coverage he rarely is used in that role on defense and he'll need to show in workouts that he can be trusted to cover in the slot.

Talanoa Hufanga is going to be a great addition on a defense that's looking for a hard hitting strong safety should have Hufanga at the top of their board. His style of play and high football IQ will make him an effective safety and one of the more versatile defenders in the NFL.