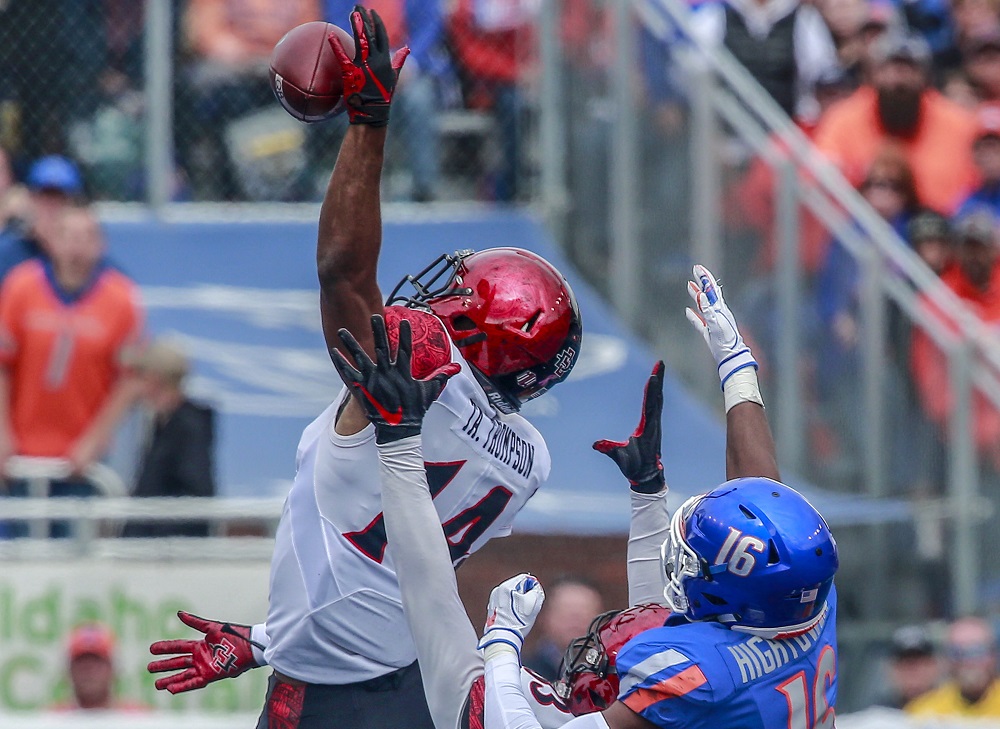 Tariq Thompson is San Diego State's turnover machine in the secondary and easily one of the most dangerous safeties in the Mountain-West Conference. He's got great size at 6' and 200 lbs. with easily the best ball skills in the Mountain-West Conference and probably the best hands among defenders in the Mountain-West Conference. He's got versatility as a defender with experience playing both safety and nickel cornerback. He's got excellent hands for a defender with fantastic ball skills that can turn any bad throw into a turnover. Very instinctual safety in zone coverage with excellent agility and quickness and does a great job of route recognition. Good burst on the pass when he spots it in the air and is very competitive on contested passes. He's a reliable tackler with good form and doesn't find himself on the losing end of a collision often. Very consistent in his play and rarely makes the same mistake twice. He's got good skills in man coverage which seems to be why the Aztecs use him in the slot so often. Doesn't get fooled by double moves often and has a high football IQ for the safety position. He's got some leadership qualities especially when it comes to communicating pre-snap with his team. He does look to strip the football when he has a chance and does possess adequate skill in this department.

He's not a great athlete and he struggles when asked to face off against some of the more athletic players in college football. He has been burned on more than a few occasions even when he gives coverage which shows a lack of long speed to his game. He lacks range for a safety and has to be totally reliant on his ability to diagnose plays in order to be a factor on perimeter passes. While the Mountain-West conference isn't the worst conference in college football, with talent getting drafted out of there every year, the quarterbacks that come out of that division very rarely make any impact in college football and one could say that Thompson has very much thrived off of bad competition.

He's a great player to have in the rotation on a roster and will likely compete for the starting job early in his career on a team but I think his lack of athletic prowess will hurt him a great deal with his draft stock given the speed that NFL teams are now looking for at the wide receiver position. I think if he can work on getting faster and more explosive on the field and then be able to show scouts at the combine how athletic he could be then I don't have any reason why a team would pick him late in Day 2 of the draft. He's shown to be one of the smarter defenders in the draft and you can't ever have enough players with his kind of instincts and intellect.