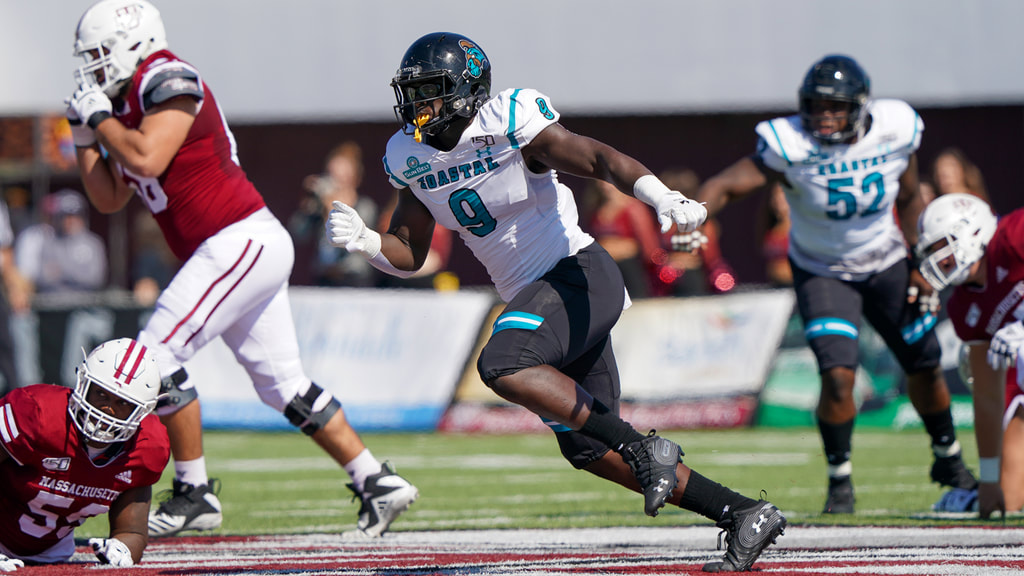 Coastal Carolina had one of it's best seasons in a very long time lead by a defense that played with a malicious mindset the most impressive player of the group was Tarron Jackson. At 6'2" and 260 lbs., Jackson possesses a compact and muscular frame and tons of explosion to pair with it. He's every bit of his 260 lbs. when it comes to power because he proved himself to be a bull dozer off the snap when he rushes the passer. He's a heavy handed player that brings the boom behind his hands when he punches. He comes off the snap with good explosion and it does help that he's already built very low to ground, allowing him to establish excellent leverage early. He's got excellent agility in short spaces can make offensive lineman pay for lunging or overextending to block him. He's very good at using his hands to counter punches and evade blockers and is one of the violent hand fighters in this draft. He uses clubs, chops, and swipes with power and precision to lineman out of his pads. He has longer arms that his 6'2" frame would indicate and when rushing from the interior, he can quickly uproot and drive back guards. He's a very strong defensive end in run defense and will hold his ground when offenses rush at him. He's an excellent tackler with a tremendous nose for the football and does a great job of trying to strip the ball out. He has iron tight hands when tackling ball carriers and brings them down quickly. He's comes with a plan B when his initial move fails often using spin-out move when an opening on the inside opens up. He plays with tremendous effort and doesn't stop playing till the end of the whistle.

He's a player who is much quicker than he is fast and isn't a threat to run down ball carriers or give chase. He has enough explosion of the snap to potentially bend the edge but he lacks the flexibility to do so consistently. He played for Coastal Carolina which isn't a college program that finds itself playing against many Power 5 schools in college football and the jump in competition could be an issue for him. His production can be inconsistent with most of it coming against programs that aren't competitive. Double teams can be tough for him break through and he will need to work on his flexibility to better squeeze through blocks in run defense. His size limits his ability to lineup outside of a 4-3 defense as an end and he may be too small to line up inside on passing downs.

Coastal Carolina is going to have more than a few players taken in next years draft but none are likely to be as good as Tarron Jackson. Jackson's pass rush technique and power are very impressive but his lack of stellar competition, while not his fault, will plant doubt in the minds of scouts. His showing at the senior bowl did him a tremendous favor but his tape is what's going to get him drafted. If he can show out in training camp and make plays in a defensive line rotation, he could be a quality starter by the time his contract is up.