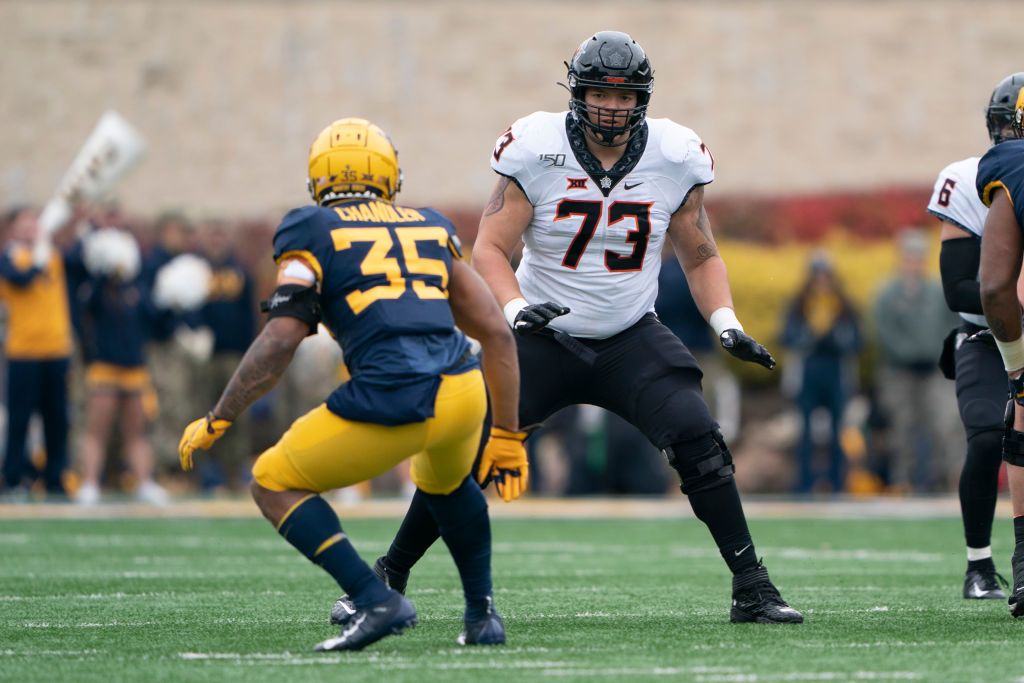 Teven Jenkins was a rock at the right tackle position in 2020 before choosing to opt out 8 games in after suffering a lower back injury. At 6'6" and 320 lbs., Jenkins brings a great deal of size and power to the tackle position. He's as aggressive an offensive tackle as you'll find in the draft, especially in pass protection. He's very good at the gaining the upper hand in a leverage battle and throwing his opponent to the turf. He loves to humiliate his opponent by laying on them and keeping them down to add salt in the wound while also keeping them out of the play. He has good length in his arms which helps at keeping his opponent at a distance. He's a good hand fighter and knows how to counter finesses rush moves. He has a good punch that will be effective in the pros and should earn him a pancake of the week award early in his career. He's clearly highly competitive in his play and will be a coach's favorite early in camp. He's explosive off the snap and in rushing game and can create lanes early on the edge. He has very strong hands that allow him to clamp down and take his opponent out of the play. He keeps his pads low and can be a load coming off the line. He was a cornerstone piece of a dominant run game at Oklahoma State that saw Chuba Hubbard run wild in 2019 and only showed consistency when Chuba again had a productive season in 2020.  He showed at his pro day that he's much more athletic than people though with fantastic numbers across the board. He knows how to buckle down and anchor his legs against a powerful bull rush and will return fire once he re-establishes his base.

He's mauler and a bruiser which has its own cons that teams are going to have to deal with. He's far too aggressive in pass protection and too often finds himself on the receiving end of holding calls. Oklahoma State is known for the Air Raid offense they employ however that offense has shown to produce underdeveloped offensive lineman as their blocking time is cut in half. He too often finds his chest being used against him and it can be a struggle to reestablish control. He can play high in his stance which can lead to him losing balance and he will need to bring his pads down in pass protection and widen his base in order to prevent him from getting run through. He's too eager as a run blocker to look for the kill shot when making blocks and too often is trying to destroy his opponent rather than neutralizing and moving on. His arm length is a big question as well as it falls below the desired length most teams require.

I think he's certainly earned a look at offensive tackle but I think his future is at guard given his aggression and arm length. His need to run over guys like stampeding rhino is encouraged at guard and may prolong his career in the pros but that certainly should be a plan if he doesn't work out on the edge. He's going to earn praise from coaches in camp and could be a fan favorite early if he shows promise.