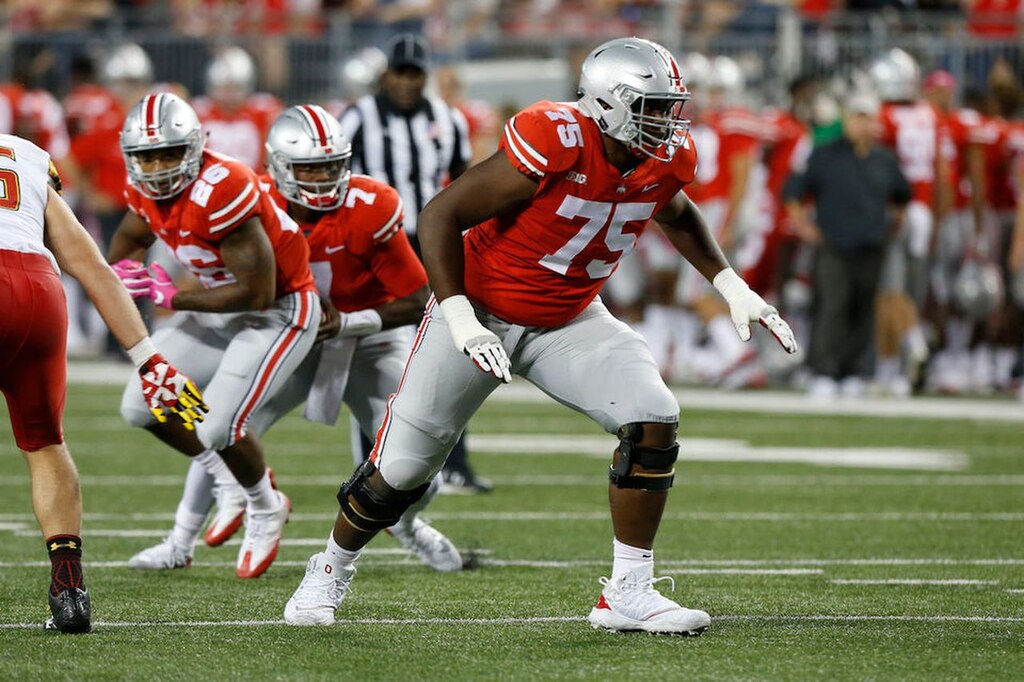 Photo by Jay LaPrete-Associated Press
Thayer Munford has been a mainstay on the Ohio State offensive line and will look to get more notoriety during the NFL draft process. At 6'6'' and 320 lbs. Thayer Munford brings excellent length, and versatility to the position. Ohio State has revamped its offense of the last few years from a ground and pound run based offense to a pass happy play action offense and Thayer has distinguished himself as a very good pass protector in his career. He has very good length in arms for the guard position and getting outreached by defensive lineman will be a rarity for him. He has a good punch when he lands accurately and has strong hands to latch onto chest pads and keep his man in front of him. When he plays tackle, he displays good polished footwork when he kicks out of his stance and can keep his edge rusher in front of him if they don't utilize tremendous speed. He's very good at keeping his inside gap clean, at both guard and tackle, forcing defenders to have to take a longer route to the quarterback. He's a technically sound hand fighter when engaging defenders and is very good at keeping his chest pads clean from edge rushers and defensive lineman. He possesses a great anchor with a powerful base and ample strength in his upper body to lift defenders and halt bullrushes. He's very good at recognizing blitzers and can neutralize them when he has time to react. He can be aggressive in pass protection when he locks up his man and has a few plays of him planting his opponent into the turf. In the run game, you can see the potential of a good road grading guard when he gets his 6'6" frame lower and drives players off the line. He possesses sufficient athleticism in the screen game when he's able to single block linebacker and defensive backs and can be a part of a convoy if need be. He's a great asset on double teams in the run game with his ability to use his powerful lower half to drive guys off the ball quickly. He's a decent pulling guard when hits the gap and can make nice blocks in the rush lane to extend plays. He's a highly versatile prospect with a tremendous amount of snaps at both tackle and guard spots and will be a valuable offensive piece to teams in need of depth on their line. He possesses great football IQ with his ability to play a multitude of positions and his willingness to do so shows his unselfish competitive spirit to put the team over him.
​
I would describe his footwork and overall movement skills as "clunky" because he's heavy footed in his stance and his movement skills are average at best, which is probably the reason Ohio State pushed him to left guard instead after losing his spot at left tackle. Not overly agile in his lower half and making quick adjustments during a play like double teams or changing direction on the fly will be difficult for him in the NFL. He can at times be late coming out of his stance which has forced to lose battles in the trenches and force him to recover before he can get going. Not a very explosive athlete, even among offensive lineman, and has struggled at times against athletic defensive lineman that can win with speed. His pad level is high for a guard likely due to his 6'6" tackle frame and lowering his stature will be a must for him to survive in the NFL. He got man-handled by Michigan edge rushers in Aidan Hutchinson and David Ojabo when he played offensive tackle and his most likely place to find success will be inside. His punch power can be inconsistent and often can be inaccurate when he initiates. He has issues with establishing angles when run blocking and can be guilty of missing his targets in the second level. Not much of a nastiness in the run game and will need to become a much more aggressive lineman to find success in the NFL. He doesn't bring much power or momentum when he gets off the line and wouldn't be a lineman I would trust to open holes in the trenches in the running game.

Thayer Munford in my opinion is quality depth with the potential to become a good starter in the NFL with continued reps in game. The good news for him is NFL offensive lines always change at some point during the NFL season with the brutality of the pro level and with his versatility, he likely won't have to wait long for his shot. If he can develop quickly by polishing his game and developing a mean streak, he could find his way into a starting role within his first couple years of his career.