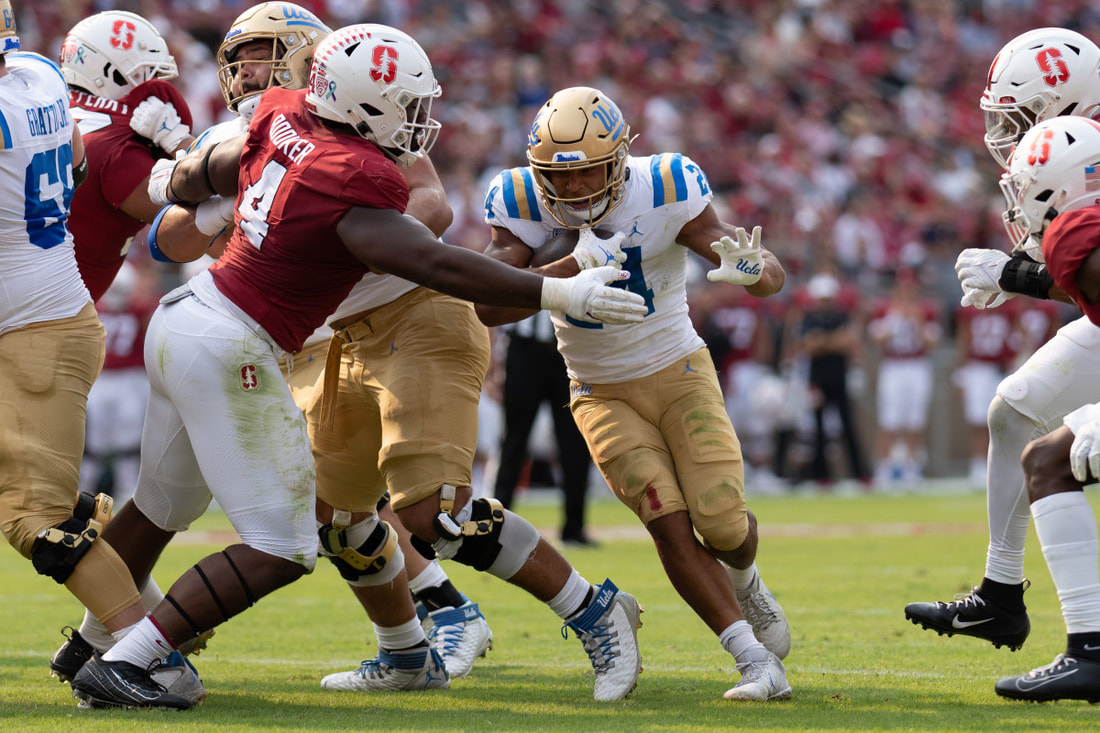 Photo by Stan Szeto-USA Today Sports
If you could build a defensive line in a factory for your NFL team it would probably look like Thomas Booker out of Stanford who may possess one of the most jacked builds for a defensive lineman coming out of college since Aaron Donald. At 6'4" and 310 lbs., Booker brings an Adonis-like build with elite athleticism, ridiculous power, and rare versatility. As a pass rusher, it's very easy to see his rare athletic traits on the field because this defender can move and like a player his size in the interior of the line. He comes out of his excellent explosion and power at the point of attack to quickly get some separation between him and the offensive lineman in front of him. He has good length in his arms and phenomenal power in his upper body as well which can be difficult for shorter armed offensive lineman to handle. He has a monster punch off the line that can be pretty accurate as well and most of his great plays have come from his ability to rock offensive off balance. He has very strong hands to rip through offensive lineman to get to the quarterback on push-pull moves and does a nice job of shedding blocks when the quarterback is in range. In run defense, he's good at shooting gaps to try and force running backs outside the hole. He's great with the offense due to his elite agility and lateral quickness that always seems to keep him in plays. When he gets his shoulders down, he's an incredibly difficult defensive lineman to move off the ball with his muscle bound build and power to match and has held his in the interior in goal line situations. Stanford used him literally everywhere on the defensive line in a multitude of fronts to try and he flashed potential to be a very reliable player at each and every position they asked him to play such as defensive end, defensive tackle, and on many occasions nose guard. He's been a team captain for the last two seasons at Stanford and has been a tremendous leader for his team and community on and off the field. He's a Stanford graduate who excelled in Academia on campus and even found himself nominated for academic awards at one of the nations most prestigious programs. Stanford athletes have a high success rate in the NFL at many different positions and teams do covet prospects from schools that continually feed great players into the pros.

He relies way too much on his elite athleticism and monstrous power to make plays for his defense and it has cost him severely in terms of fundamentals of the position as well technique in both the run and passing game. Outside of an occasional rip move, Booker doesn't possess any pass rush moves in his repertoire. He plays with terrible pad level from start to finish on every play and has no counter rush game if he gets caught. He doesn't seem to understand how to put moves together and struggles to shed blocks once a lineman gets into his chest. His pads climb as he starts to drive his opposing lineman back in run defense and can find himself getting into stalemate quickly. When he doesn't play with low pad level he's found himself getting run over very quickly as he doesn't have the flexibility in his frame to properly withstand getting driven off the ball.  He spends too much time watching the play develop and not enough time trying to disrupt and it's unclear to me whether this is a coachable issue for him or a problem coaching staffs are going to get frustrated dealing with. He doesn't play with much nastiness or anger in the trenches which is something you need to have a little of to survive in the NFL and coaches are going to have to grind on him in practice to see if he can get angry and make plays. He was misused in my opinion at Stanford as he suffers from the dread swiss army knife role on a front seven with coaching staffs thinking that he can do everything for the team because of his athleticism and never learned how to play one position great. He's inconsistent as a defensive lineman as you'll find in the NFL draft when it comes to technique and fundamentals of the position but when he flashes potential, it's incredibly bright. His motor can run hot and cold at times as he can at times be seen running 20 yards downfield in an effort to make a play or fond himself watching a running back fight through tackles 5 yards from him with him rushing in to end the play.

Thomas Booker may have suffered from thinking too much on the field as the Stanford Cardinal coaching staff had him wear a ridiculous amount of hats for a defensive lineman and getting him to play one particular position in the NFL could be just what he needs for success. His home in the NFL is at the 3-tech tackle position in a 4-3 defense as his size and athleticism make him a perfect gap shooter at the very least in the pros and if he can fix his technical and fundamental issues with his game while playing with some anger, a team could have reliable starter at discount pick. Thomas Booker has produced quite a bit of flashes in his Stanford career and all he needs is the right coach to give him some gas to turn him into a raging fire on the field.