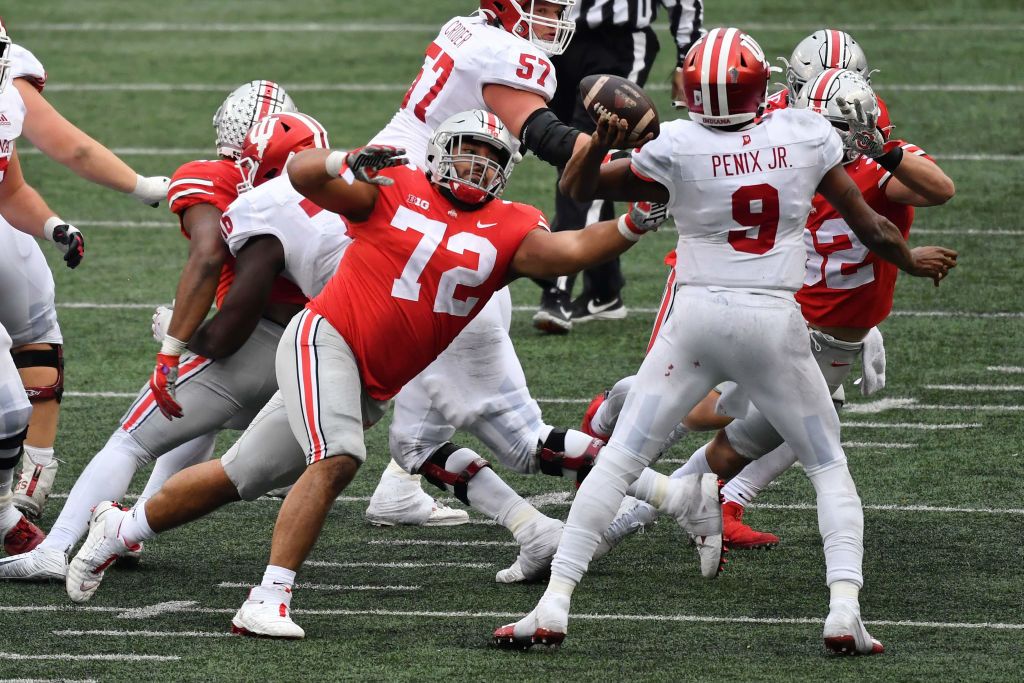 Tommy Togiai played very well for the Ohio State Buckeyes in 2020 and really elevated a defense that lost quite a bit of talent in the 2019 draft. At 6'1" and 300 lbs., Togiai brings great power and ferocity to the defensive line. He's a space-eater through and through and did just that for the Buckeyes. He relishes eating up blocks and giving his exceptional linebacking corps opportunities to make plays in the backfield. He boasts a powerful upper body and has shown little issue with shedding blocks and collapsing the pocket. He's a force when bull rushing and does a great of drawing double teams when pushing his man up field. He has a very powerful punch and strong hands to rip offensive lineman off of him. He's surprisingly nimble and agile for a man his size, especially for a 1-tech defensive tackle, and has on more than one occasion given quarterbacks fits by penetrating the back field. He does a great job of collapsing rush lanes and holding his ground on ISO runs, allowing his teammates to clean up plays. He does a good job of flowing with run plays and never seems to find himself being caught in the wash. He's a great second effort player who can finish off scrambling quarterbacks that find themselves in his proximity. He's a violent defensive lineman when it comes to hand fighting and block shedding and will scratch and claw his way to break free. He's a good arm tackler who drags down ball carriers when gets a fist full of jersey. He consistently wins with pad level and leverage and doesn't find himself getting driven off the ball often.

He possesses very short arms which can be a detriment when breaking away from offensive lineman. He's strictly a space-eater in the NFL and won't give a team much outside of run stuffing. He doesn't bring much first step explosion off the snap and is usually making up ground before taking it. He doesn't have a pass rush move that's very effective and wins mostly with his bull rush. He doesn't bring much versatility due to his size and lack of playing time early in his career and won't find much success outside of a 4-3 defense as a 1-tech.

Run stuffers are still a valuable asset in the NFL and can occasionally find themselves with a lucrative deal but rarely are they in high demand in the draft because they can come from anywhere. Togiai will be forced in the middle of line as a space-eater and run defender but he offers no positional flexibility outside of that role.