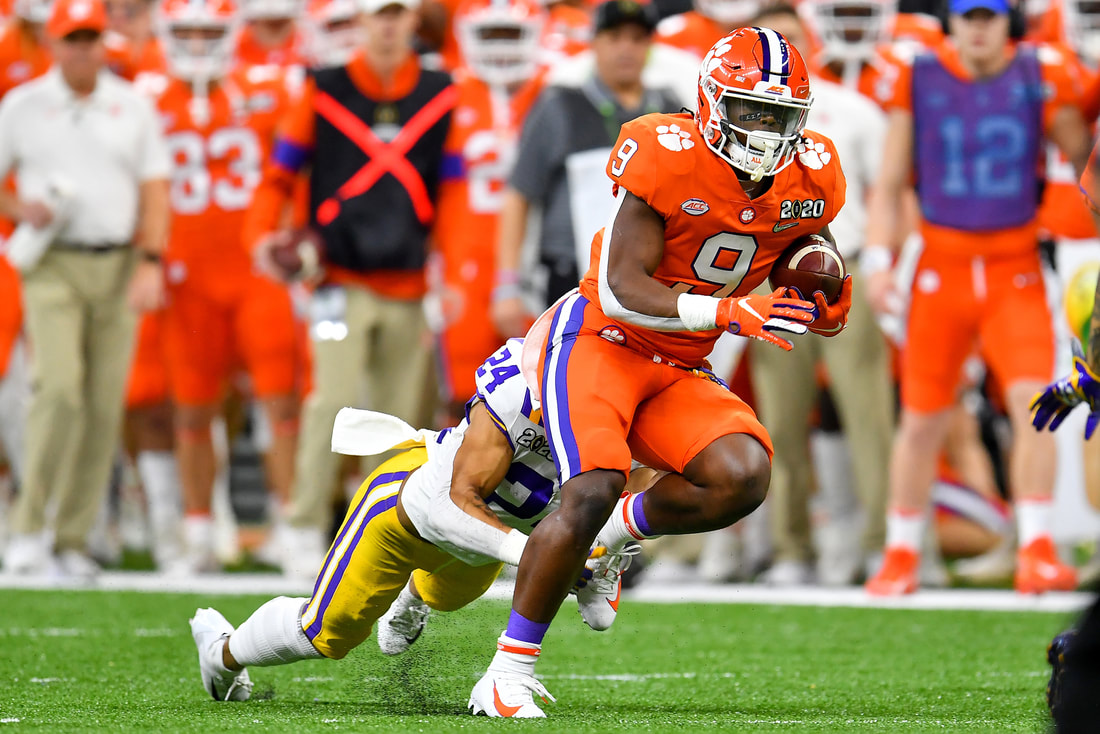 In January of 2020, Travis Etienne decided to return to college football which shocked most teams considering the short shelf life of running back careers. And while the decision was questionable, his talent is undeniable and is one of the biggest reasons for Clemson's success over the past few seasons. He's got everything you want in a running back with elite level speed, power, and agility. He's got break away speed when he gets a hole to run through and if he gets past you good luck catching him. He's a malicious ball carrier despite his 5 '10' ' and 215 lbs. who has no fear of contact in-between the tackles. His agility is one of his best attributes because defenders never seem to get a clean shot on him trying to bring him down. He's got an elite level spin move that can break any NFL pros ankles and on many occasions in 2019 he used it multiple times on the same run. He can take a shot and keep his feet churning and still get ready on the next play. Unreal balance in his feet to get knocked sideways and keep his feet as and it also helps him spin-out of most tackles he's put in. Excellent power in his chest and arms that allow him to use a vicious stiff arm on incoming tacklers and he usually plants them into the floor. His explosion and burst through a hole is elite and pretty much eliminates defensive lineman from arm tackling him. He can turn into Emmitt Smith when running into the trenches and is easily the best running back in the draft when making guys miss in small spaces. Great back to have in pass protection as he knows how to pick up blitzers and will pop them if he gets a good opportunity. He has very good hands and knows what to do once he gets the ball. He plays like his life depends on it and will fight extra yardage when he has to. His ball carrier vision is excellent for a running back with his ability to read his blocks and find the path of least resistance in an NFL defense.

While he's a tremendous running back overall, his stats might be a bit inflated due to having Trevor Lawrence and Justyn Ross on his same team which allows him to face 5-man boxes and really do damage to defenses.  I am also concerned about the amount of touches he will have gotten after starting 3 seasons for the Tigers and how his shelf life as a running back. He plays behind a very impressive offensive line that is usually surprising defensive lineman with run plays, given the potency of their passing attack.

Etienne is one of those rare running backs that have everything like an Ezekiel Elliott or a Saquon Barkely but his amount of carries plus his offense not necessarily runs through gives me a little pause to draft him early in the first round as he lacks the experience the aforementioned had at taking over ball games. He's a guaranteed Day 1 pick in the draft and a staple in a  team's backfield for over a decade.