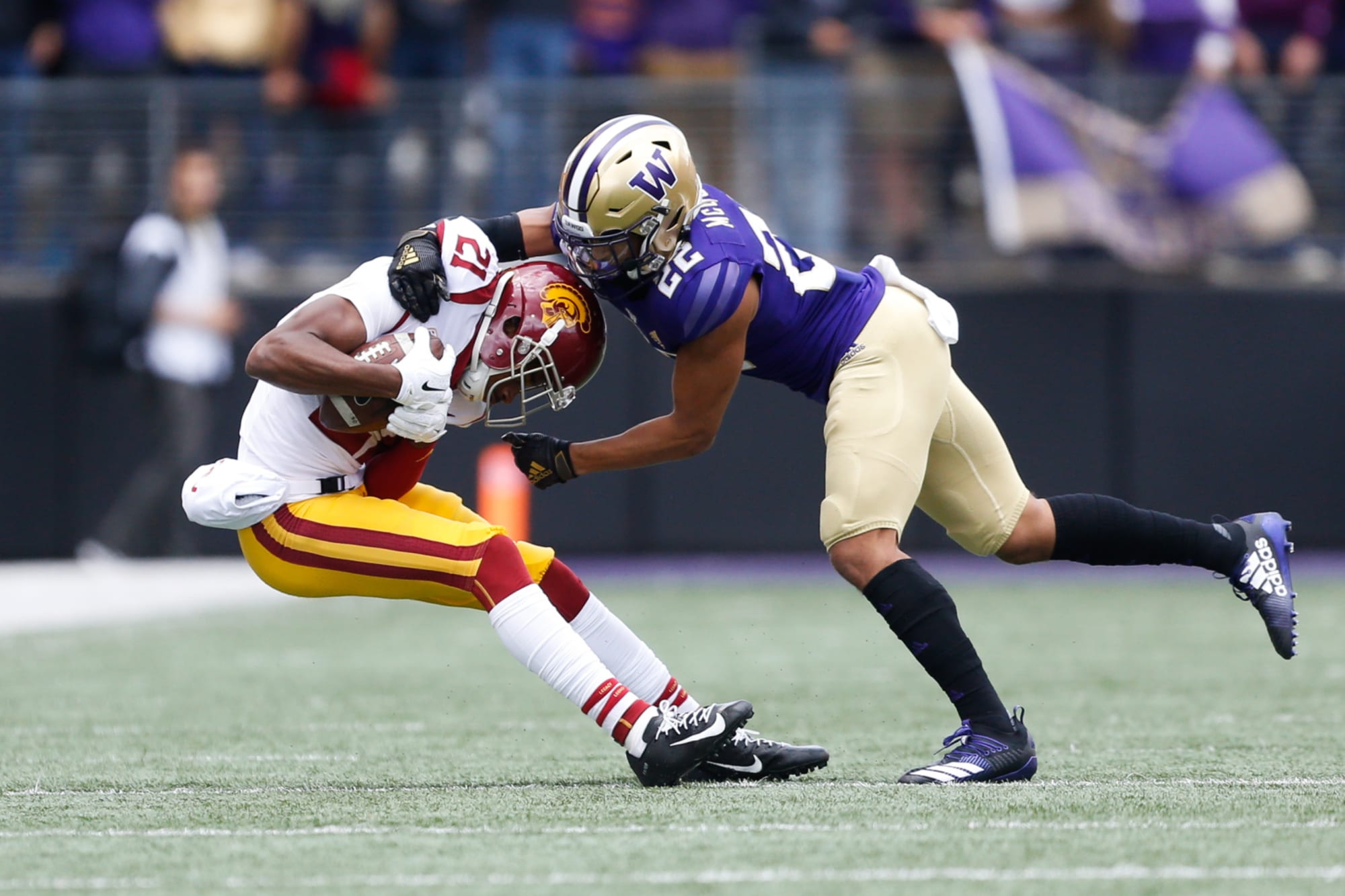 Photo by Jennifer Buchanan-USA TODAY Sports
Washington University has been a decade-long factory when it comes to producing talented NFL defensive backs and Trent McDUffie looks to be the next player to come off the Husky production line. At 5’11” and 195 lbs., McDuffie brings freakish athleticism and a very high football IQ to the cornerback position. He’s probably the most explosive player in the draft which is evident when he bursts on the football and nearly levitates in the air when contesting catches. He’s extremely agile even among cornerbacks in the draft and his ability to change direction, turn on a dime, and make plays on the ball with the best of him. In man coverage, he can stick to receivers like a shadow and not just because of his freakish athletic profile but also because of his overall technical prowess at cornerback. He has phenomenal route recognition at the snap and rarely finds himself making false reads in coverage. He plays with extraordinary patience at the beginning of the route and doesn't bite on sluggo’s or hitch’s, forcing the quarterback to make his second read quickly which gives his defensive line more time to make a play. He has textbook footwork in his back pedal and rarely finds himself over extending or turning up field too early. He’s one of the best in the draft at keeping up with his opponent without getting his hands on him, avoiding costly penalties down field. In zone coverage, he displays excellent range and explosion out of his stance to make plays on the ball and cover a large area of the field. He’s very good at reading the quarterback's eyes and diagnosing where he wants to throw the ball and does a great job of covering quickly. He’s a versatile cornerback prospect with snaps both on the outside, against the teams best receiver usually, as well as in the slot and he has excelled at both positions for Washington. He’s very tenacious on contested catches and will fight, scratch, and claw at the football, often forcing receivers to fight for possession of the pass rather than yards after catch. He’s a tremendous tackler for a cornerback as he plays with great toughness and technique when bringing down ball carriers. He has a phenomenal knack for causing fumbles in his college career and his ability to cause turnovers outside of picking off the football is highly impressive.

While he’s tough at the point of contact, he’s not big enough or strong enough to be reliable in press coverage, at least currently in his football career, and likely won’t be on the field when asked to lock up bigger stronger receivers at the line. His size and length don’t help him very much when facing bigger receivers that specialize in contested catches as they can at times outmatch at the catch point. He doesn’t possess the strength to consistently jam receivers at the line and struggles to force receivers close to the boundary line on deep balls. His ball production is somewhat concerning at the corner position with his low interception and defended pass statistics but that’s likely due to quarterbacks avoiding him. On the opportunities he has had to make plays on the ball, he shows average hands and ball skills and will need to better learn to come away with the football. His lack of length also doesn’t help him when it comes defending passes as he can struggle to shrink throwing windows on receivers and get his hands into the catching point of the football.

Trent McDuffie athleticism, toughness, sky high football IQ, exceptional technique, and toughness and if he were a little bit bigger and stronger he probably would be the best cornerback in this draft. I think he has enough size to survive in the NFL as many players with his frame and strength have succeeded at the outside cornerback position. He could be a defensive coordinator's dream cornerback prospect with his ability to line up outside or in the slot and his technique could make him a very good prospect out of the gate in his rookie season. He’s a high floor NFL draft prospect that could be another phenomenal former husky to play in the NFL.