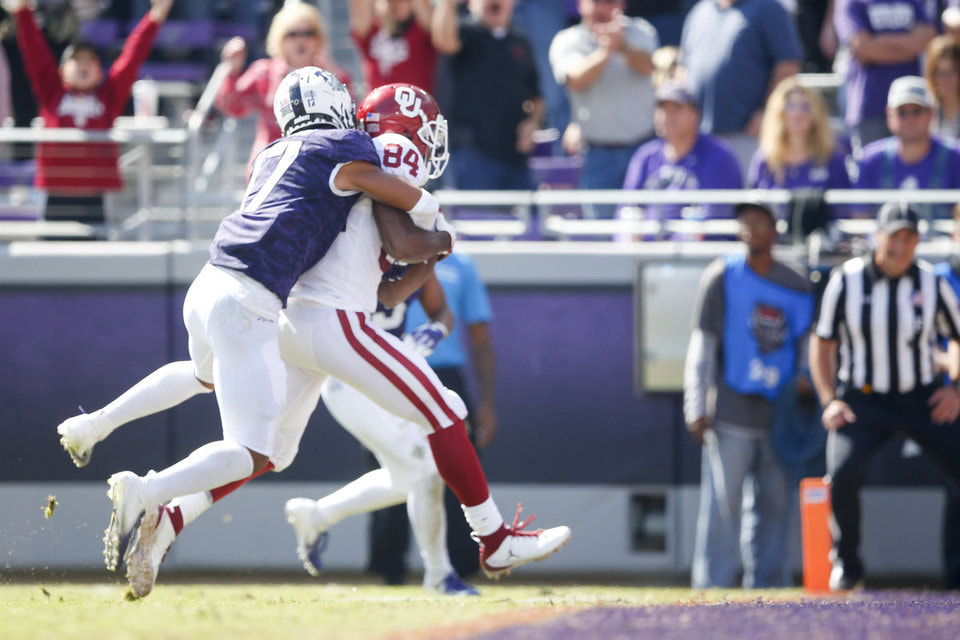 There wasn't a safety in 2019 in the BIG-12 more fun to watch than Trevon Moehrig-Woodard and he is hopefully going to produce and play the same way in 2020 and beyond. He's 6'1" and 205 lbs. with a sinewy and athletic frame as well speed to burn at the safety position. Easily is one of the most aggressive ball hawks in his conference and it was on full display last year with him colliding with receivers on deep passes and coming away with the football. He's got impressive range and speed at the safety position which allows him to man his usual single-high safety position and simply cover the back end of the defense. Looks for the football in the air and has excellent burst on the pass in order to make a play. Aggressive at getting his hands into the receivers hands at the catching point and making it as difficult as possible to complete the catch. He does have a good sense for stripping the football and creating turnovers outside of picking off passes. He's got enough vertical explosion to make plays on jump ball passes and cover taller tight ends over the middle. Excellent zone coverage skills, even for a safety, with great vision and mental processing when anticipating passing patterns and timing his jumps on the ball in the air. He's got very good awareness locating the ball in man coverage and does a good job of turning his head around and avoiding a dumb penalty. Very good at diagnosing plays before they happen and his route recognition is even better.

He's like a teething puppy when asked to play man coverage because he will beat on everything with his eagerness to intercept the pass and it can cost him and his team big, especially with the offensive powerhouses of the BIG-12. Too often gets overly aggressive when attacking the football in jump ball scenarios and can get P.I. calls thrown his way which is not at all a good trait to have as a deep zone coverage safety. Can focus on the quarterback too much at times and let receivers slip out from behind, especially on double moves. He's about as inconsistent and technically unsound a tackler as you'll find on defense and it certainly has made him a liability in run defense. Not at all comfortable with playing at the line of scrimmage and it certainly shows when tasked with making plays in the trenches. His lack of strength in his frame, even for a safety, is very noticeable and has been dragged by running backs on more than too many occasions. He plays in a football conference, the BIG-12, that is full of offenses that rely on throwing the football downfield and his stats and production might be a bit inflated. Too often goes for the feet on ball carriers and tries to trip them rather than going head up and tackling them.

He's at his best when tasked with covering deep in the back end of the defense and looking to make a play on defense and is likely going to see that role once he enters the pros. He's likely going to hear his name called in Day 2 of the draft with his issues and because of his position but after winning the Jim Thorpe Award this year and having scouts rave about his ability, it would shock me to hear his name called late in Day 1. You can't teach his speed and athletic ability and his cerebral grasp of the game has developed increasingly every year of his college career and I wouldn't be shocked to see him in a pro bowl down the road in his career.