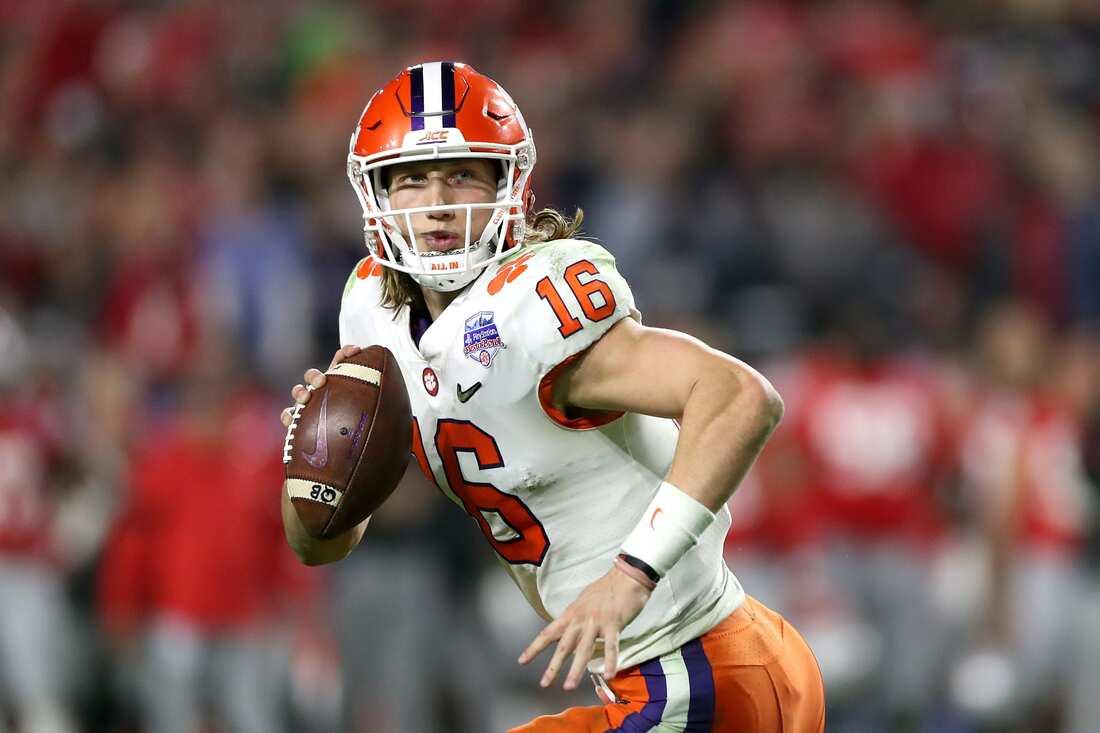 If Joe Burrow and Lawrence were entering next years draft, there no question in my mind that Lawrence would be the 1st guy off the board. He's that good! He's got the size of an elite level quarterback at 6'6" and 220 lbs. with a muscular frame that still has room to grow. He's got hall of fame level arm talent out of college and that's not just some hyperbolic statement to boost his draft stock. He's got a howitzer for an arm that can easily hit receivers 65-75 yards down field with plenty of speed behind the pass. The torque and explosion the ball has when it leaves his hand is unreal and hits the target with exceptional quickness and touch. His accuracy is phenomenal when throwing the football from the pocket as well as on the run. He can hit the tight windows that only the great quarterbacks can and he's able to accurately throw passes at all levels of the field. Elite level poise and patience in the pocket and never seems to be phased by blitzes and incoming defenders looking to sack. Good awareness in the pocket when it comes to protecting the football from being stripped and has strong hands to hold it and keep the football when he's getting swiped at. His tall stature allows him to see the field very clearly and be able to recognize routes opening up down field. Quick release on his throws when he sees his receiver and has proven to be a difficult task for defensive backs trying to intercept or even disrupt his throws to his receivers. Excellent field general at the quarterback position with the ability to clearly recognize defensive plays before they happen and make the correct adjustments on offense. He's got the elite level technique and footwork in the pocket and should find himself quickly among the top quarterbacks in the NFL when tasked with passing form the pocket. If he can't beat team with a pass, he'll beat with his legs which he did plenty in college and while he's Lamar Jackson, he's still an elite level athlete for the position and has shown the ability to take off from the pocket and outrun defenders for a big gain  (Just ask Ohio State in the 2019 College Playoffs). Loved his disgust in himself after losing the national championship to Joe Burrow which shows his winners mentality. Very good at not throwing errand throws and protects the football when making passes. He's as tough as depleted Uranium and has taken big hits and gotten up like it was nothing and has on many occasions taken the read option up the middle in goal line scenarios and come on the other side with guys on his back. He's a great leader and fighter until the end who never sees any game out of reach. He's as clean off the field as you'll find as a quarterback who even got engaged before the 2020 season to his longtime girlfriend which shows a level of maturity and prowess rarely seen coming out of college. He lives in the film and never goes into a game unprepared.

He can hold onto the football too long and take a sack and he is prone to focusing too long on his first read which can get him in trouble at times. He has played on a Clemson team that has seen an unreal amount of talent go into the NFL and not just from his offense but his defense too (Just look at the 2019 NFL Draft). He's has played with incredible receiving talent with Tee Higgins and Justyn Ross catching his passes as well as arguably the best college football running back in Travis Etienne for over two seasons and about to be a third. He also had shoulder surgery this offseason but luckily its on his non-throwing arm which isn't a big deal.

​There is little to almost nothing wrong with game and has easily the highest floor for a quarterback I have ever seen since Andrew Luck got drafted in 2012. Quarterbacks with Trevor Lawrence's talent come around only once a decade, if that, and when you have a chance to draft them, you don't wait very long to do so. He's got hall of fame potential in him and I would be shocked if he's not playing, and winning, Super Bowls within his first five seasons in his NFL career.