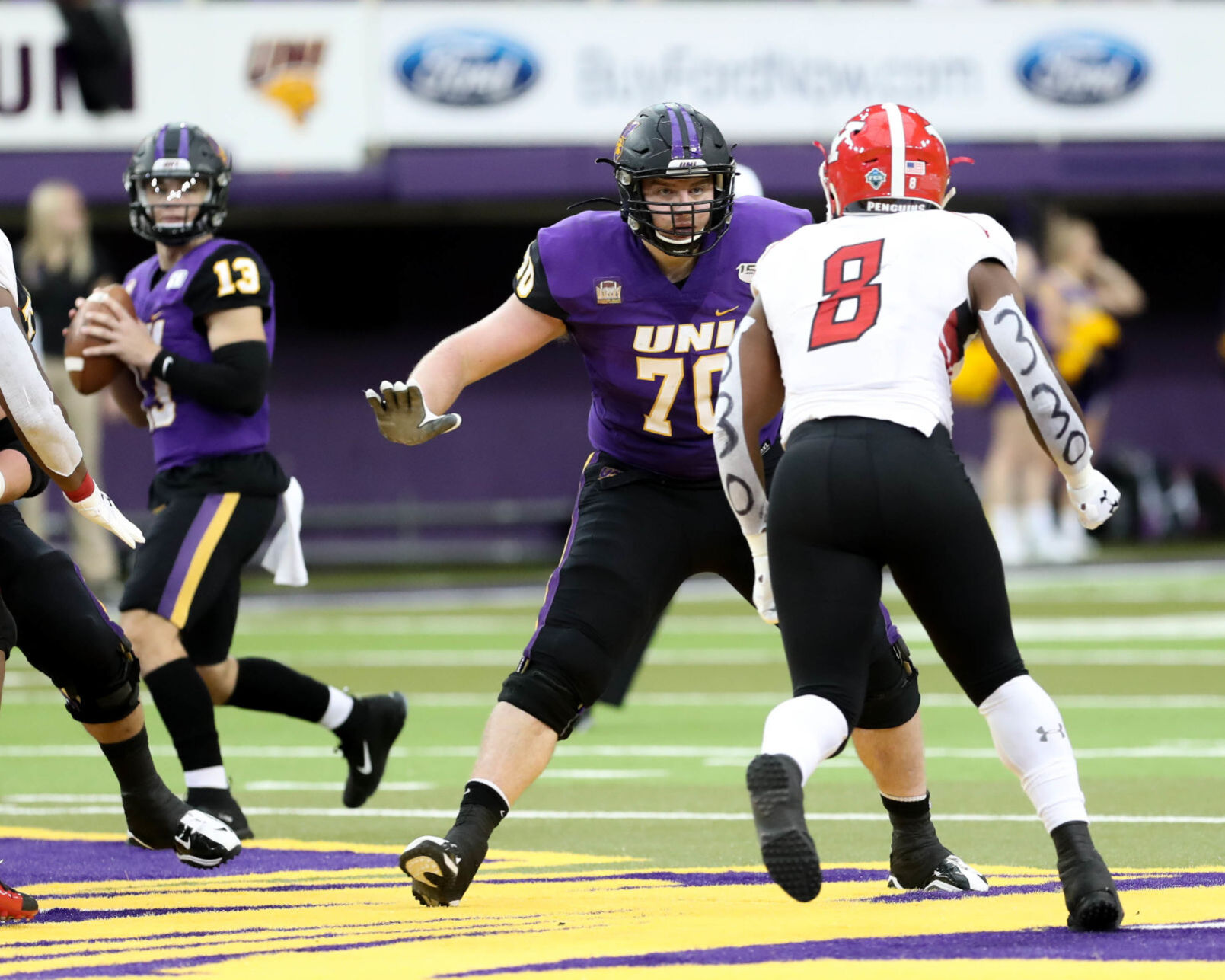 Photo from Waterloo-Cedar Falls Courier
UNI has suddenly become a school to watch when it comes to producing NFL prospects with Spencer Brown, 3rd round pick by the Bills, and Elerson Smith​, 4th round pick by the Giants, however UNI offensive tackle Trevor Penning has a far more potential than both players with some scouts even grading him as a first round pick. At 6'7" and 321 lbs., Penning brings elite length, size, and athleticism. I don't know what UNI feeds it's players at school or what's in the water in Northern Iowa but they have produced some freakish athletic specimens in recent years, which is odd for such a small school, and Penning is certainly one of their best athletically. In pass protection, Penning displays exceptional explosiveness out of his stance and edge rushers struggle mightily to outrace his outside shoulder. He has outstanding agility and and quickness in his lower half to mirror edge rushers at the snap, ride them out of the pocket, and double back to protect his inside gap. He possesses elite length in his arms given his size and does a excellent job of using it to his advantage. He's very good at keeping his chest clean from defenders and if they get latched on to him, he has more than enough power in his arms and chest to quickly break grips and reestablish the upper hand in a hand fight. His punch has exceptional power behind it and often knocks defenders off balance or even backwards, both on the edge and on the line. He's malicious blocker when he gets his defender in a disadvantageous position and planting lineman and driving them into the turf is something he relishes on the field. His anchor is excellent with his thick tree trunk legs and quick feet and I have yet to see him fall victim to bull rush. He possesses a phenomenal grip when he gets his hands into his opponents pads and is extremely difficult to break away given his overwhelming power. In run defense, you can see the former offensive guard and right tackle in him because he's bulldozer off the line. He does a good job of getting low pad level off the line and he brings immense power, momentum, and viciousness at the point of attack. His power at the point attack often blasts open holes early in his gap and gives UNI running backs huge lanes to rush through. He has a very wide base when he drives lineman off the ball and his power in his frame allows him to walk defenders out of the lane. He's as violent and ferocious as you would hope an offensive lineman can be because he's looking to wreak havoc and inflict pain. He has more than enough athleticism in his lower half to block more elusive linebackers and defensive backs trying to evade him and can go head hunting when he lines up his target. He's a high football IQ offensive lineman who is still learning left tackle position after playing both guard and offensive tackle before being tasked with the offense's most difficult job at times and he has played excellent in his limited time at the position. His time at other positions gives him the potential to be a versatile prospect on the defensive line. He's a ferocious competitor on the field who doesn't quit based on his film and teams love having players like him on their team because they know he'll give them 100% of himself to the game of football.

He's a raw left tackle prospect technically and it would show on occasion in pass protection. His punches, although menacingly powerful, can be inaccurate and not timed very well resulting in mitigated power at times and occasionally holding calls. He can get caught lunging in pass protection when he loses his footing and can fall victim to getting ripped aside by defensive lineman or leaves his inside gap open, Will McDonald IV made him look bad on more than a few occasions due to this tendency. At Penning's height, keeping his pad level can be a struggle for him and it can get the best of him when he gets bull rushed by more powerful lineman. He has issues with establishing leverage when run blocking and can really struggle to bull off the line that have an easier time getting underneath his pads. His footwork can be clunky at times, especially against speed rushers, and can lose his feet when attempting to keep his balance. His highly aggressive style of play can often get the best of him as he can look to create pancakes over securing blocks. His competition in his college career is his biggest question mark heading into the draft because his only real test in college was against Iowa State's Will McDonald IV, who he played well against when he faced him. He's only played tackle for two seasons, he was a guard in 2019, and only played left tackle in 2021, was a right tackle in 2020.

Trevor Penning is one of the biggest boom or bust prospects in this draft, both literally and figuratively, and teams that draft him need to be patient with his development because it could take awhile for him to adapt to the speed of the NFL. His rare athletic gifts and traits make him one son enticing as prospect and his tape shows a player that can quickly develop and adapt to change, although the NFL is a different beast entirely. I can certainly see a team in the back end of Day 1 picking him and letting him develop behind a veteran and if he is a hit on the draft board for his team, he has pro bowl potential.