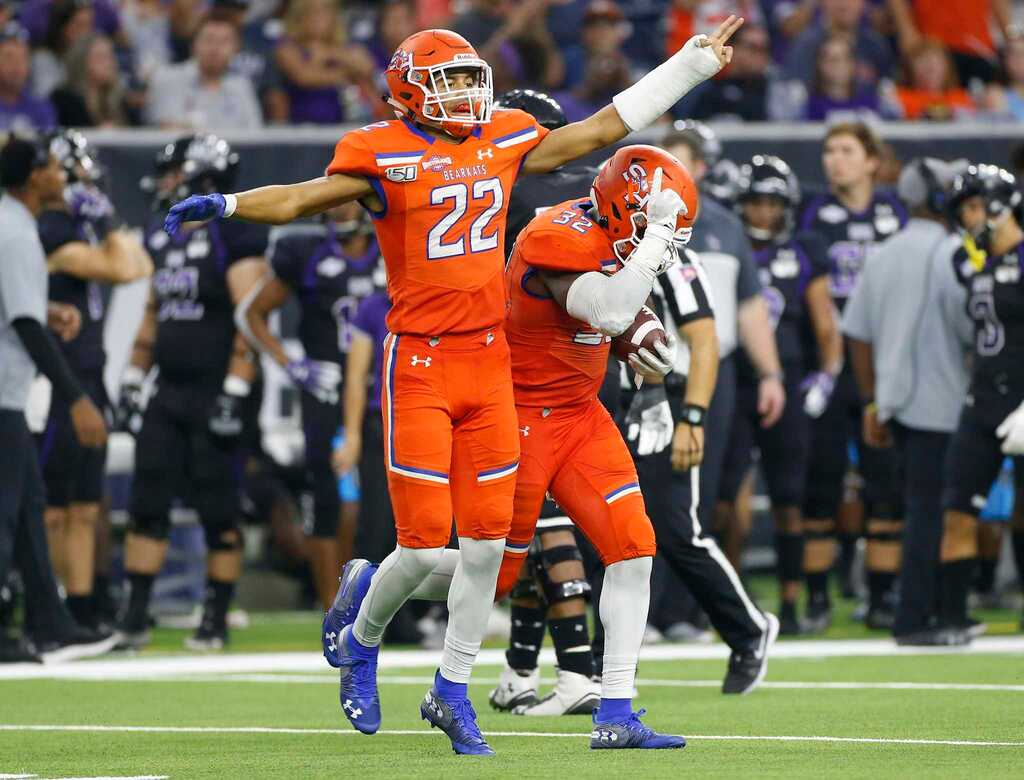 Photo by Elizabeth Conley-Houston Chronicle
If there was a draft small-school prospect that stole the show at the NFL combine it was Sam Houston State defensive back prospect Zyon McCollum whose measurements and performance in drills showed a player that could be a starter very early in his career. At 6'2" and 200 lbs., McCollum brings elite athleticism, elite ball skills, and exceptional football IQ. In man coverage, he plays with great fluidity and speed early in his coverage from beginning to end and has all the makings of a reliable outside cornerback. When playing off, he has excellent footwork and quickness to stay patient in a route's development so he doesn't bite too early and give his man an opportunity to burn him. He can match his opposing receivers speed up and down the field and can never have found himself getting burned deep down field. He can change direction on a dime and has shown to be capable of sticking to his man downfield. Phenomenal recovery speed if he gets beat on a route and never counted himself out of a play.  In press coverage, he plays with good aggression at the beginning of the right with solid punch at the snap and good aggression to ride his man around the field. He's certainly capable of jamming his receiver at the boundary line and forcing them to have a small landing zone when trying to come down with contested catches. He can force them to work hard to stay on their routes which can force late timed throws as well as incompletions and has shown shutdown corner abilities on the field. He thrives in zone coverage on the field with elite range and fluidity in coverage to basically act as a third safety in his area. He's great recognizing route patterns early in their development and does a phenomenal job of flowing with the coverage rather than dashing into lanes. He's not fooled by look offs or pump fakes directed towards him and can at times shut down half the field for his defense. When he attacks the football he does so with great speed and explosiveness to at the very least impact the catch or come away with a pick. He's not afraid to take on bigger receivers or tight ends in zone, man coverage for that matter, and can contest any catch thrown at him. He has elite ball skills for cornerback and often times when he has a shot at coming down with the pass he comes through in a big way for his team. He's accurate at batting away throws and has excellent hand-eye coordination to come away with tipped balls in the air very quickly. In run defense, he's fearless at attacking the line of scrimmage and sticking nose in the trenches to make tackles and Sam Houston State regularly blitzed and kept near the line with his propensity to find his way in the backfield. He can hit like a freight train when he sees an opportunity to do so and has dislodged quite a few footballs in his career by either punching or laying the wood on somebody. He was the team captain and leader of the Bearkats defense and teams looking for a great locker room presence can certainly count on McCollum to bring it. He has a relentless work ethic and is a student of the game by all accounts and should find some fans in NFL coaching rooms come draft day.

Sam Houston State is a small football school in the middle of Texas that rarely plays the top programs and any production he had for the program should come with an asterisk when compared to others from Power 5 programs. He's overwhelmingly the best athlete on the field whenever he's playing and his athletic ability and skill set rarely gets challenged by his opposing receiver. Tackling angles have been inconsistent at times and has occasionally gone for the big hit rather than technically sound tackle which has given ball carriers chances to bounce off and get more yards. Short arms for his size and it can be hard at times shroud off receivers downfield. His length in his arms also don't help much when making tackles in the open field and he'll need to do a better job of angling and squaring up his target when making a stop. Although he's fluid enough to potentially play in the slot, he rarely played snaps in the middle of the defense and I believe to strictly be an outside cornerback in his career. He's so athletic on the field that he can be guilty of attacking routes late which has led to missed interceptions or catches in his area.

It's rare that a cornerback of McCollum's caliber in terms of size, athleticism, character and technique is found on a small-school squad like Sam Houston States. He mainly won with athleticism admittedly and when he reaches the NFL he's going to have to learn fast that the other pros in the league can run just as fast if not faster than him. He needs a little polish to his game but this is a player with all the gifts most prospects at the position desire and if he can adjust quickly to the speed of the NFL he'll be a very reliable starter early in his career.